UncategorizedOctober 14, 2016Comments Off on Happily Ever After? 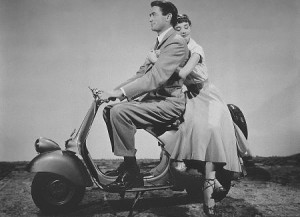 We’ve all heard the story. Boy meets girl, boy and girl hit it off, boy and girl conflict, boy and girl are lost without each other—often involving a lonely scene in the rain, a revelation occurs, boy and girl kiss and make up. Happily ever after. It is the predictable, cheesy love story that we can’t help but watch. Love is inextricable to the human experience of life; it is a pervasive component of our social world as we search for it, deny it, or are head over heels in it. Countless renditions of love and romance that exist in our culture perpetuate an idealistic, cliché notion of true love, which is to say that, happily ever after is always attained in the end by the perfect couple. Just take a look at Disney. For the majority of the current young, female adult population, the message drilled into our minds as children was that one day our own Prince Charming would come. We as a society have been indoctrinated to believe that we find the one, fall in love, and have a stable, committed relationship that is topped off with holy matrimony. This is how we have been taught to define love. This is what our culture tells us love looks like. Yet, this doesn’t seem to be the consensus anymore.

Romantic comedies have been one of the most enduring film genres through the history of cinema. Reflective of gender roles, social constructs of family, marriage, and love, romantic comedies have served as key indicators of political agendas and social attitudes towards the private sphere of love in a light-hearted, humorous manner. From William Wyler’s 1953 classic, Roman Holiday, staring Audrey Hepburn, to 21st century films such as Love Actually and No Strings Attached, it is clear that romantic comedies have undergone a striking transition. We’ve seen the female lead occupy a more empowered role, an increased openness to sexuality, and even a disillusionment of the institution of marriage. Arguably, the purity and privacy of love have transcended into a raunchier, non-committal rendition. Perhaps this portrayal of love holds more true to our modern reality and escapes the predictable formula for love that is incessantly shredded by moviegoers and film critics of rom-coms. 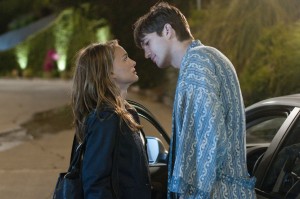 Over the last decade, romantic comedies have been more or less the same, each following the conventions of the genre with their own variation. A staple for a rom-com is the “meet-cute.” This is when the two protagonists encounter for the first time, often under an awkwardly adorable circumstance that makes hearts flutter and the audience smile like idiots. Often a comic clash of personalities is presented during the meet-cute, falling in line with the notion that “opposites attract.” For instance, in Woody Allen’s classic Annie Hall (1977), Annie, portrayed by Diane Keaton, first converses with Alvy Singer at a clubhouse following a game of tennis set up by mutual friends. The exchange illustrates a contrived attempt to sync schedules with one another, laden with cringe-worthy lines. Annie asks Alvy if he would like a lift, Alvy agrees and asks where she’s headed; Annie says, “I’m going downtown,” to which Alvy says, “Oh, I’m going uptown.” Annie immediately changes her answer and says, “Oh, right! I’m going uptown too.” Alvy proceeds to question Annie why she initially said she was going downtown, resulting in a concoction of rambling and flirtation. Yet, the awkwardness doesn’t deter us, rather it persuades us to root for the couple.

Following the meet-cute, the characters go through obstacles of the narrative. One of the most common conflicts used is that of social rank or class. For instance, Audrey Hepburn plays a European princess who falls in love with an American reporter in Roman Holiday. Martha Coolidge’s The Prince and Me (2004) depicts the romance between a Danish prince and an American college girl, which stems from his attempts to escape his regal duties. Each film differs in what these obstacles specifically are, but they all share the resolution that the couple comes out the other end hand in hand. It is shown time and time again that the ingredients for true love are loyal commitment, an undying desire to empathize and understand each other, and original, meaningful romantic gestures. In the narrow realm of the romantic comedy narrative, these specific inputs guarantee the output of “happily ever after.” 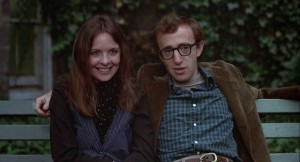 I have a confession to make. I like to watch rom-coms because I can bank on a resolution. There is a certain mentality, or cinematic flavor one desires when choosing to watch a rom-com. It is a feel-good genre that leaves us with more faith and optimism in life’s path. However, on the opposite end is the romantic drama, which does not always end happily. Take Nicholas Sparks’ The Best of Me as an example. During my first viewing of the film, I spent a solid seventy percent of it sobbing and frustrated with Sparks’ literary decisions. The film tells the story of high school sweethearts, who drift apart, but reunite after many years following the death of a mutual friend. The film presents a series of flashbacks to their happier days as adolescents as well as their troubled origins. The male lead, Dawson, comes from a broken home dominated by his abusive, alcoholic father; the female lead is the pretty, witty, and relatively wealthy Amanda, who has micro-managing parents. A series of unfortunate events follow, including an accidental shooting of Dawson’s friend during a brawl between Dawson and his junkie father and brothers, jail time on Dawson’s part as a consequence, and Amanda’s unhappy marriage. Upon reuniting after many years, the two rekindle their romance. Dawson apologizes for neglecting Amanda during his imprisonment and confesses that she would eternally be the love of his life. Following their brief escape into the past, Amanda returns to her normal life, but before long, she has an epiphany to seek a divorce to return to Dawson. A dramatic voice message is left for him, detailing Amanda’s reciprocated love, but before this message reaches him, Dawson is shot dead by his father on the streets.

The Best of Me was one of the few movies that I couldn’t let go. I felt robbed by the story and its conclusion. When presented with a narrative that didn’t fit the traditional, idealistic social construct of love, it was unsettling and even distressing to accept. However, if we look at reality’s statistics, since the late 1960s divorce rates have been on the rise. After the presence of women in the workplace became more common, society showed a trend in delaying marriage. This social phenomenon also contributed to a new variation of comedy, referred to as “screwball comedy,” present in many rom-coms. Stemming from the 40s, the nuanced genre portrays the novel power play of the female as the dominant, rather than the male. Masculinity in the relationship is challenged, revealing a battle of the sexes and providing comic content. Old rom-coms that depicted the man as a sex-driven, flirtatious figure and the woman as the naïve damsel-in-distress role was no longer the case. For instance, The Proposal (2009) features a female high-powered editor who essentially blackmails her male secretary into forging an engagement with her in an attempt to evade impending deportation back to her home country, Canada. The woman here uses the male to serve her needs in between her work-driven existence. The modern-day consensus seems to be that career, especially the female’s career, takes priority of love and relationships, deviant from the traditional rom-com.

Another prevalent change is how rom-coms address sexuality. The “hook-up culture” currently spans from high school, well through into adult life, skewing the previously established chronology of romance. Casual sexual relationships and multiple-marriages are now more acceptable than the historically shown. Judd Apatow’s Trainwreck (2015) staring Amy Schumer claims to reflect this “modern” spin on romance. Following the life of Amy, a men’s magazine editor, the film is explicit in its message right off the bat. The opening scene, as well as its official trailer, features a flashback to Amy’s childhood when her father was informing his two middle-school daughters of his divorce with their mother. The father saliently directs the two young girls into reciting after him: “Monogamy isn’t realistic.” This concrete, unexpected claim is weirdly refreshing to see on a rom-com screen and forces us to adjust our palettes to consider an alternative way to experience love. As we fast forward through Amy’s adult life, we see the pattern of alcohol, drugs, and casual sex with a variety of random men. In the trailer, Amy proclaims, “I am just a modern chick who does what she wants.” It is worthwhile to recognize that though rom-coms reflect the attitudes of society towards love, it is more precise to say that it reflects society’s escapist fantasies and desires in relation to love. In Trainwreck, we see an independent woman with a stable job, with no committal ties to a single person; she is simply having fun exploring her sexuality. 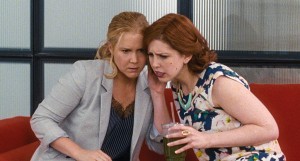 Amy and Nikki listen attentively to Aaron’s phone call the morning after their hook-up.

The movie gets interesting when Amy is assigned to cover a story on a male sports surgeon (Aaron), to which the interview results in a dinner date and adult sleepover—an one-off event as Amy forbids herself to stay the night with any hook-up. In a farcical scene the morning after, Amy and her female coworker and friend panic when Aaron calls Amy. She immediately assumes that she was butt-dialed, but after learning that the call was intentional, the friend quickly says, “Hang up. He’s obviously, like, sick or something.” Following up to hang out after a night of sex is clearly portrayed to be a social no-no, ironically the reverse of what we have been wired to think.

The bulk of the movie shows Amy and Aaron’s relationship blossoming, despite her volatile familial situation. Having previously being drilled into believing that monogamy wasn’t realistic, her ailing, disapproving father takes a toll on her relationship with Aaron. The death of Amy’s father ultimately serves as the catalyst for Aaron and Amy to call it quits. Amy reverts back to her ways of drinking and partying, but she no longer sees any value in those ways. For a film that clearly sets itself up as a distinguisher from the rest of the rom-com pack, the conclusion is unsurprisingly familiar. Amy commits to a grand gesture of love, including a jumbotron and coordinated dance sequence with the Knicks City cheerleaders. She is successful and a triumphant pop tune accompanies the credits.

Similar to films like No Strings Attached and Friends with Benefits, Trainwreck plays off the fantasy of having the sexual freedom and benefits of relationships, minus the complicated, emotional baggage. These are features claimed to be indicative of our new, modern manifestation of love. And yet, all of these films insist on still concluding with the familiar “happily ever after.” Why? Has it become embedded into our culture, in which the narratives of rom-coms cannot escape? Would an alternative ending similar to The Best of Me still be classified as a rom-com? Despite the disapproval of monogamy and attempts to break free from emotional efforts and commitments to another person, which are present in our fantasies, we still find ourselves resolving romantic conflict with the very notions we were originally trying to escape. It becomes clear that there is a reason the same narrative arc of the romantic comedy is fed to us by our culture time and time again. There is a reason why we still choose to consume this culture, despite its repetition. At our core, our outlook on love, as exemplified through romantic comedies, has changed very little. Beneath the lace, flowers, and sentimental orchestral tunes, the fundamental message remains the same: we as a society still strongly believe that our one true love will prevail all obstacles.