Death in Utopia: How Pop Culture Gets Away With Murder

UncategorizedNovember 29, 2016Comments Off on Death in Utopia: How Pop Culture Gets Away With Murder

The promise of a perfect world, a perfect society free from social ills and injustice, the utopia has enchanted and enthralled humanity for generations. Since the publication of the novel that coined the phrase, Utopia by Thomas More, it has fixated the imaginations of creators and audiences alike for centuries. In modern media and popular culture, there are few attempts to create pure utopia. Instead, authors, screenwriters, directors, carefully infuse their work with utopian elements. This trend reappears countless times throughout modern pop culture and one, perhaps somewhat unexpected example, is detective fiction. 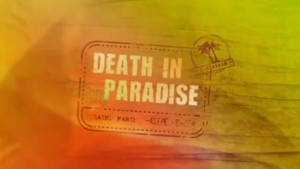 Since trying to argue my point with every detective story as proof would quickly become messy, I will focus on one specific series: Death in Paradise. The show follows a reluctant English Detective Inspector (D.I.), Richard Poole, who is “temporarily” relocated to an island in the Caribbean called Sainte Marie to work with local law enforcement.  In each episode, the team is confronted with a new impossible, wildly creative murder that only the brilliance of the D.I. and the tenacity of the team can solve. So, though it has a few distinguishing features that come with the paradise locale, it fits the general detective fiction trope rather nicely, not at all out of place amongst the dozens of other detective shows the BBC airs. 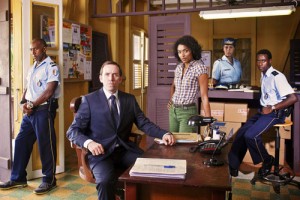 A core goal of utopian societies is a concerted effort to perfect institutions. This seems an inherent part of the detective story. The detective serves as something of an indicator species: a brilliant member of the police force who unfailingly solves crime and locks away dangerous criminals is evidence of an institution operating at its highest possible capacity. And when they start watching, the audience takes it on faith that, in the end, the detective and his team will stop the bad guys. Their belief in the detective is transferred onto the police force as a whole, allowing them to experience a second-hand utopia through this perfected institution.

Further than just believing in the ability of the detective, the audience must trust his goodness. The main detective of a show is never corrupt and often storylines will revolve around him rooting out misconduct amongst his peers. Death in Paradise tackles this trope in the first episode of the series. D.I. Poole’s first case ends in the arrest of one of the local police officers for abusing the benefits awarded her position to smuggle goods into the country and for murdering her accomplice. This one episode very deftly proves to the audience the virtue of the remaining members of the team and assures them that the D.I. will prevent any future corruption of the system.

Professor George Grella analyzes a final way in which detective fiction perfects the system: the act of the murder itself and the concluding capture of the murderer. In his paper “Murder and Manners: The Formal Detective Novel,” Grella writes that “the detective novel features two expulsions of ‘bad’ or socially unfit characters: the victim and the murderer” which in turn “ ensures the continued happiness of those remaining” (Grella 41). Grella reasons that to merit being killed, and to make a compelling story that involves multiple suspects, the victim must either be a particularly detestable person or have done something particularly detestable. A possible exception to this is if a person is murdered accidentally, but even then, the murderer believes they are killing the horrible person, not an innocent stand in. For example, in season one, episode two “Wicked Wedding Night,” a hotel butler mistakes a newlywed bride for a serving girl who had refused his advances but actively sleeps with other people in the hotel. Though the bride had done nothing wrong, she was killed in the butler’s attempt to eliminate someone who had violated the social code and in the end, the maid ends up dead.

In this sense, death in a detective series serves a very different function than death in  perhaps a drama or a thriller. In these types of stories, the audience is meant to empathize with the victim and detest the murderer for killing them. In detective stories, the victim must be viewed unfavorably by the audience because they are meant to remain impartial, the death serving as  merely an opportunity for them to test their wits and logic. This disparity is the reason death only exists as utopia in detective novels.

So, by killing the victim the murderer completes the first “expulsion” and the detective then completes the second by arresting him. The murder is necessary for the first expulsion because the victim is truly only guilty of social infractions and is therefore out of the detective’s hands. By killing a socially undesirable person, the murderer serves a function in the utopia but in doing so, they have themselves committed a violation, risking the security of the society which can only be restored by their removal. In season one, episode seven “Music of Murder,” the lead singer of a local band is killed before a reunion show. In the exposition scene, D.I. Poole reveals motives for five of the six suspects. The victim had wronged nearly everyone close to him but none of his actions directly violated law. His death was the only way to expel him from society to ensure the happiness of those around him. The detective then comes along to tidy up the mess by removing the person who killed him. In this way, each installment of detective system cleanses the system.In these three ways, detective fiction offers the audience a partial utopia. 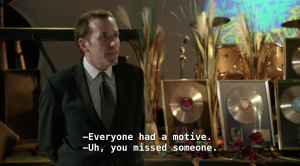 A second, essential feature of the utopia is that it must be felt universally. The word itself derives from “eu-topos – denoting a region of happiness and perfection” (Munker). Linguistically, the term encompasses the entirety of a place, not simply a single person which implies that there must be a general sense of well being and goodness. The means of achieving this widespread happiness inevitably varies from person to person but the overall effect must always be the eradication of injustice. Detective fiction does this neatly and rather surprisingly. Murder, and the resulting bubble of suspicion, crosses all social bounds. Anyone can be murdered, anyone can be guilty. By confronting us with humanity’s universal flaws and weakness, detective fiction forces us to regard everyone, regardless of real-world social stigma, as existing on the same plane. While this method is crude and not as sunny as many imagine a perfect system should be, it is, undoubtedly, equalizing. Beyond this fundamental equality, there is a sense of universal improvement that comes at the end of every story that ties back to the “expulsions” mentioned earlier. A systematic and habitual purge of all the bad apples must mean that the remaining society is, as a whole, good and therefore better.

Death in Paradise, along with many other modern detective series, particularly American ones, has taken the theme of equality further and has made concerted efforts to diversify their casts and advance the roles of women. The show holds true to Caribbean demographics. Three of the four members of the Santa Maria police force, as well as the police commissioner, are of African descent, leaving the detective inspector as the sole primary Caucasian character. This in not merely for the sake of appearances. Within the show, there is an ingrained appreciation of local knowledge.  Dwayne, the longest standing member of the force and the show’s primary source of comedic relief, frequently relies on his contacts in the local community to move along a case, despite facing derision and judgment from his fellow officers. In season three, episode two “The Wrong Man,”  a key witness refuses to speak to the police without first being offered a bribe. Fidel, Dwayne’s superior officer refuses to pay despite Dwayne’s insistence that the man will never budge otherwise. The witness only spills because Dwayne, while sitting down for beers with him at the end of the episode, pays him under the table saying, “ I knew [Fidel’d] never get it out of you any other way.  It’s only his first few months as sergeant.”  The show makes the point that without an intimate knowledge of the local community success is unlikely.

As for the roles of women in the show, again in “Wicked Wedding Night”, Detective Sergeant Camille Bordey effectively reminds D.I. Poole, and therefore the audience, that women are equal to men.  After he spends the first 10 minutes of the show bossing her around and dismissing her inputs, Camille  pulls D.I. Pool aside and tells him frankly:

I am a Detective Sergeant in the Sainte-Marie Police Force. I graduated top of my year, I have three

commendations for bravery, I have been shot twice and I could almost certainly beat you in a fist

fight. Whereas is you, you are rude man. You are ignorant, full of your own self-importance,

expecting everyone to follow you around and hang on your every word? From now on, you treat me

with a little more respect I’ll be forced to forget that I’m a police officer.

This scene sets a precedent for mutual respect  between men and women that carries on throughout the show. 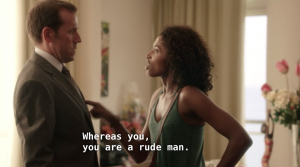 A final, vital characteristic of the utopia is a replacement of the repetition and dullness of the current system with newness and excitement. A detective show changes every week: new victim, new murderer, new suspects. This demands that the series constantly introduces new characters and new adventures. Thinking of increasingly brilliant murderers gives the writers artistic freedom to think up unimaginable scenarios and so the show is never stagnant, never dull. More than that though, detective stories are so appealing because they can be interpreted to possess a comic function. In his analysis of the genre, Grella writes:

The central puzzle provides the usual complication, which the detective hero must remove; and its

difficulty ensures a typically comic engagement of the intellect. The whodunit’s plot, full of

which often depend upon mistaken motives, confusion, and dissembling; it also supports the

The complexities of a detective story have the same effect on the audience as the twists and misadventures of comedies. In this way, each installment is a rejuvenation of the system.

There is one way in which the detective fiction is repetitive: it always has a happy ending. Though the detective might be stumped for most of the story, in the end, he will pull through. This is true of all 40 episodes of  Death in Paradise. However, it is important to distinguish this repetition from the repetition of the system being replaced. By repeating the motif of victory in every episode, the show reinforces the sense of the reliability of the institution (police force) and the safety of the general society. It gives rather than detracts from the utopia.

What this all boils down to is a reinvigoration of the current system in which it is purified, equalized, and charged with a sense of excitement. By watching a show or reading a book which revolves entirely around murder and crime, people are truly experiencing a partial utopia. 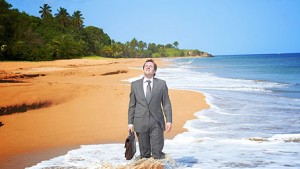