UncategorizedDecember 15, 2016Comments Off on All Eyes on X-(wo)men

Superman, Batman, Captain America, Spider-man, Iron Man…The superhero franchise has long been dominated by male heroes who fight against male villains. Superhero films featuring female heroes as the main focus, such as Supergirl (1984), Catwoman (2004), Elektra (2005), and Wonder Woman (2009), are relatively unheard of and do not even garnish a fraction of the attention androcentric superhero films do. Nevertheless, people believe that the role of women have greatly evolved since the inception of the superhero franchise. Over the years, as more and more people care about gender equality and entertainment tries to appeal to both men and women, it should come to no surprise that movies with male leads like the X-men series have included women as fighters in the spotlight, not just useless assistants. In order to determine just how progressive superhero films have become in regards to their inclusion and portrayal of women, let’s focus on two important female characters from X-men 3: Jean Grey and Mystique.

In X-men 3, we realize that Jean Grey, first introduced to us as an ordinary student of Charles Xavier with the limited power to move small objects, is actually the most powerful mutant in the films. After she sacrificed herself in X-men 2 (2003), her rebirth as “the Phoenix” in X-men 3 gives her strength and power unfathomable to those around her. Armed with telepathy, telekinesis, and immense cosmic forces, she does what she wants whenever she wants and brings down destruction and havoc whenever someone attempts to control her. If the movie had stopped with this description of her, many would have been pleased by how it gave so much independence, free will, and power to a woman. Unfortunately, the Phoenix side of her is unable to control itself and she begins to kill people on the good side.

Despite her power, in her most vulnerable state, Jean is still subject to the male gaze, a term coined by feminist film critic Laura Mulvey, which relegates women to objects created to satisfy male fantasies. As Logan watches Jean lying on the recovery table after her resurrection, the camera adopts a male perspective as it lingers on her breasts. Even though she emerged from the waters fully and modestly clothed, somehow, while she was unconscious after her tumultuous resurrection, she was stripped down into wearing nothing but a skin-tight tank top—the movie didn’t even give her the decency of pants. The viewer, through the eyes of Logan, assumes the role of a voyeur, peeking in on a sleeping, half-naked woman. Even when it is illogical, the movie prepares the woman to be viewed as pleasing from a heterosexual male view, and we as viewers unconsciously take on this perspective simply by watching. We become Peeping Toms as we watch Logan and Jean kiss passionately. Mulvey describes this relationship as “sexual imbalance, pleasure in looking has been split between active/male and passive/female. The determining male gaze projects its phantasy on to the female figure which is styled accordingly” (397). Logan’s attraction to Jean is shown by the camera’s focus on Jean’s breasts and bare legs, and we the viewers subconsciously absorb this male fantasy of Jean’s sexuality.

While Mulvey correctly identifies the passivity of the female as male pleasure, the film shifts away from this relationship when the female gains so much power that she subverts the male gaze. The male gaze is intact when Logan is finally able to act on his sexual desires, but we quickly realize something is very wrong once Jean/Phoenix begins to literally suck the life out of Logan. Cultural critic and psychoanalytic philosopher Slavoj Zizek describes this moment in “The Interpassive Subject:” “The object which gives body to the surplus-enjoyment fascinates the subject, it reduces him to a passive gaze impotently gaping at the object; this relationship, of course, is experienced by the subject as something shameful, unworthy.” The gaze of the subject, in other words, the viewer, becomes meaningless once the object of the gaze, Jean, becomes the one acting rather than the one acted upon.  Once she is presented with agency and power in one of her episodes of rage, she cannot be objectified under the male gaze because she is no longer passive and thus cannot be controlled. As Jean unleashes her anguish after realizing she (as the Phoenix) killed her boyfriend earlier when she was resurrected, Logan tells her repeatedly to look at him. The narrative calls the viewer to shift their attention to Logan, and in doing so, we take on Jean’s perspective. At this point, the male gaze is rendered useless, as the object has acquired enough power to refuse objectification.

The film ultimately punishes the woman for her rise to power after leaving a man’s control. Jean joins Magneto, another powerful mutant and leader of the Brotherhood of Mutants who aims to oppose the “cure” that humans have invented to suppress mutant powers. She is led to believe that she is joining on her own terms, egged on by Magneto’s constant reminder that Charles just wanted to contain her powers. However, she is serving as a weapon for Magneto’s use, once again the obedient assistant under the guise of freedom. Jean effortlessly breaks out of Magneto’s control due to her immense powers, but with no one left to control her, she is a menace to all. The film’s solution? Death. While Magneto’s strength and crazy aspirations to kill humans are contained by four needles of the cure to his chest, Jean has to die. When the gender roles reverse and a woman holds and directs the power, she is villainized and killed. She becomes dangerous and is promptly removed from the narrative as soon as she no longer serves the purpose of scopophilia as a passive object. Furthermore, the way she dies is, in itself, peculiar. After a brief lapse back into her normal self, she begs Logan, her on-and-off lover, to “save” her, to which he complies with one thrust of his adamantium claw into her abdomen. Her plea and ecstatic expression after Logan stabs her carry strong sexual undertones (not to mention Logan is half-naked in this scene). When faced with the threat of an uncontrollable woman, the film successfully manipulates us into believing that the male’s sexual conquest of the female is the only way to go.

If Jean Grey represents the over-powerful superhero turned villain, it only makes sense to look at the powerful female villain—Mystique. Villain may be too strong a word because she is not evil per se (in the way that the film makes Jean evil), but she is at least on the side that the film wants us to root against. Mystique is a shapeshifter, and in her natural form, she does not wear clothes. At first glance, it can be argued that she is sexualized merely given that she is naked throughout the films and fights with agility and flexibility which evoke sexual imagery. In “Vivacious Vixens and Scintillating Super Hotties,” Richard Gray writes that superheroines are created to be attractive so that their power does not make the viewer uncomfortable: “When balanced, I would suggest that in the last decade, the superheroine offers men a ‘best of both worlds’ scenario: they possess both the physical ass-kicking strength and strong sex appeal that men need in order to satisfy their ‘scopophilic drive’” (81). While Gray may argue that Mystique’s nude form serves to fulfill sexual desire, he is wrong about Mystique to say that “accentuation of ‘physical’ elements largely involves stylized positioning of the body in order to capture certain voyeuristic ‘shots’ (emphasis of the breasts, for example), in order to depict an idealized female form. This somehow diminishes the super-heroine’s superpower” (83). It is in her natural form, naked and free, when Mystique is at her most powerful. I would even go so far as to argue that by choosing to remain in her bare form, she best resists the male gaze. Although Mystique’s body is thin and toned, fully on display for all to see, notice that she is also blue, scaly, and in some sense of the word, scary to look at. Her reptilian yellow eyes penetrate the viewer (reflecting the viewer’s male gaze back at us) and we cannot help but shudder when she shapeshifts from a normal human back into her natural form. The men in her life try to convince her to assume a normal woman’s appearance, and even give up her mutant power. Defying their desires to change her into something that could be ogled at and objectified, the woman maintains free will and overthrows the viewer’s efforts to manipulate her. 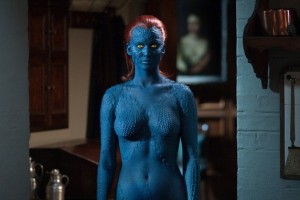 Mystique’s downfall, then, occurs in order to reestablish the male control of the female body. Mystique sacrifices herself to save Magneto, taking the bullet containing the cure that suppresses mutant powers. As she lies on the ground quivering, her blue skin and scales receding to reveal a beautiful, naked woman with flawless skin, Magneto and the other men stare down at her in shock. No one moves to help her. The stark contrast between the blue-skinned, scaly Mystique and the helpless, truly naked Mystique invites the viewer to sexualize Mystique in a way not possible when she had blue, reptilian skin. Although she is naked in both forms, her blue form enabled her to resist the gaze. By taking her power away, the movie effectively reinstates the male gaze upon Mystique.

Although the film creates and acknowledges the possibility of powerful female characters, it strips away their power as the plot progresses—a sort of testament to what happens when women ask to become more than just the subservient sidekick. On the one hand, we start with sweet, manageable Jean; this side of her is created and maintained by Charles who uses his telepathic powers to suppress the Phoenix side. But once she breaks out of his control as the Phoenix, she is able to defy the male gaze by claiming her individuality. The film did not think this was an acceptable or viable path for women, so in the end, her freedom is taken away and she is punished by death. On the other hand, we have Mystique—capable, independent, and resistant to objectification in her natural blue form. Once again, the movie rebukes the woman for her dismissal of the male gaze, this time by taking away her mutant power. What this boils down to: female superheroes/villains have to be attractive and can sometimes be strong, but once they find a way to oppose the male gaze, their power, or even their entire character, is exterminated. The dominance of the male gaze cannot be questioned, and in watching mainstream movies that enforce this perspective and penalize alternative ones, we continue to live in a world encoded in patriarchal meaning and point of view.