Starting out the morning with a run by the river set the tone for the day. I think that running outside is a nice way to connect to a new environment because you can see more than when you’re walking around, but you also have more time to take in your surroundings than when you’re driving or riding on a bus. You might think that running would feel like rushing, but I find that it’s a chance to slow down and clear my head. 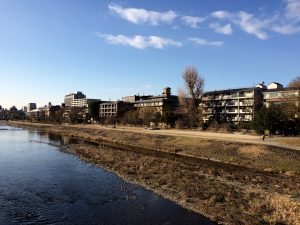 The Kamo River – a beautiful spot for a morning run

I thought about this idea of calmness in motion when Ayumi, Carl, Kyrien, and I visited the Shinto shrine Fushimi Inari in the morning. Fushimi Inari is famous for its fox motif and over 10,000 red-orange torii, which are gates that mark the transition to a sacred space. 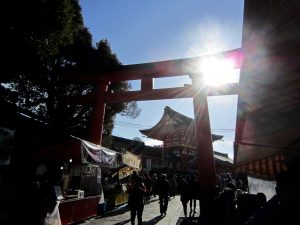 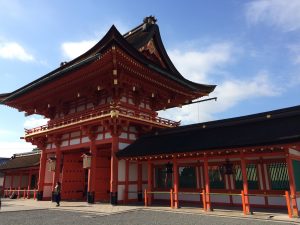 The main shrine, which you approach on a road lined by lots of street food and small shops, is located at the base of a mountain, and we decided hike all the way to the summit. The walk was longer than we expected and included a lot of stairs, and at first we wondered if we should turn around so that we could stay on schedule and have time to make it to all of the other spots that we were planning to visit. Ultimately, however, we ended up climbing all the way up, and there was something almost meditative about this experience. The path to the mountain top is lined by so many torii that they form a sort of tunnel, and as we walked up stairs through the seemingly endless row of torii, surrounded by moss-covered trees, and not quite knowing how far away from the summit we were or even what to expect at the top, I felt myself letting go of our thoroughly researched itinerary and plans and just focusing on the experience and the moment. 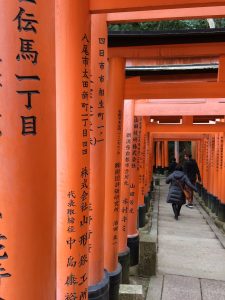 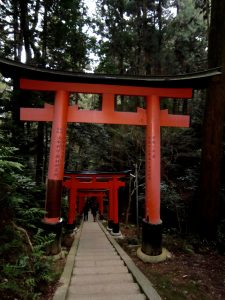 The repeated torii created a soothing consistency, but we also encountered some lovely, unexpected surprises, including a hidden mossy grotto, fox statues, cats, and mini torii and shrines. I was moving, but, as with my run, movement allowed me to slow down and appreciate. This perhaps paradoxical insight reminds me the bamboo we’ve been seeing and how it doesn’t break because it’s able to bend in the wind. That flexibility, willingness to adapt, and ability to move – to move forward, to move on, to let go, etc  – is so central to resilience. 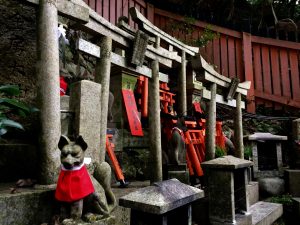 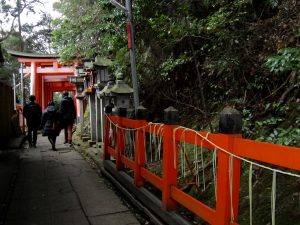 Our visit to Ginkaku-ji (the Silver Pavillion) was just as rewarding as Fushimi Inari. Its gardens were absolutely beautiful, with uniquely textured dry sand gardens, old trees with twisting trunks, carpets of moss, reflecting ponds, stone bridges, and paths with bamboo handrails. 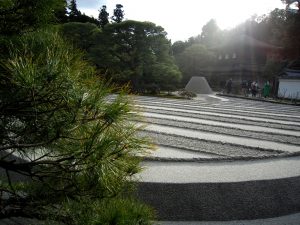 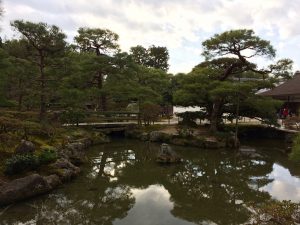 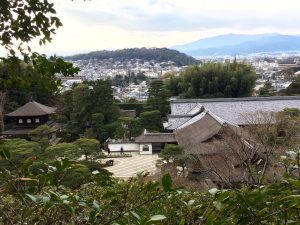 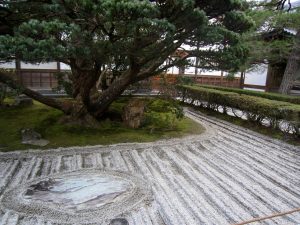 My love of moss has definitely reached new heights here in Kyoto. Anyone in the group can tell you that I’m always exclaiming over moss. The moss at Ginkaku-ji, in particular however, was immaculate — soft, thick, and bright green. We saw a man carefully tending it, gently poking holes into it and trimming away the longer strands. The entire garden was filled with moss, yet this man was working meticulously on one tiny patch, and I thought again about the value of slowing down and intently focusing on one particular thing, even when it’s clear that there’s a lot to do. 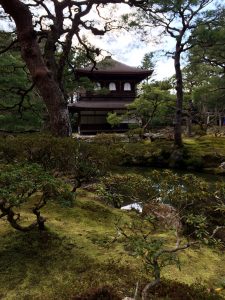 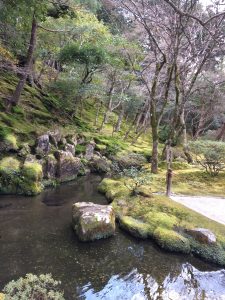 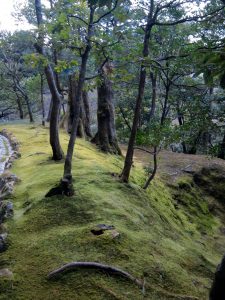 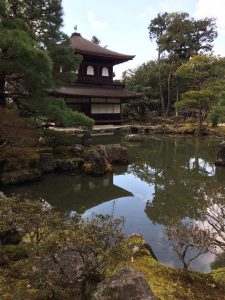 After thinking so much about finding meaning through focused, intentional motion and action, strolling down Philosopher’s Walk seemed like a fitting end to the day’s adventures. We walked along the stone path from Ginkaku-ji all the way to Eikando Temple, and shared some good conversation as we did so.

As I think about the day, I’m glad that we decided to cut some parts out of our itinerary and focus instead on enjoying each experience more fully. There are always more things to do, but ultimately, I think quality matters so much more than quantity. Not only did that mean appreciating the places we visited but also taking the time to share time, stories, and laughter together as a group. (One particular source of amusement today was my struggle [captured on video by Kyrien] to eat my curry udon with chopsticks. It turns out that udon noodles are quite slippery, and slurping without splashing myself and everyone around me is also a lot harder than it looks!)