Wow! What a fun day we had today! Since the class had the day off from official course business, we were free to plan our own itinerary for the day, and I definitely better appreciate the careful planning and thought that went into planning this trip now! If yesterday was all about learning from the locations visited, today was all about learning from and enjoying the company of friends!

I woke up early to put together a day for myself and some others. I didn’t plan perfectly, and we had to cut out two things along the way, but the amazing day only made me want to come back to Kyoto some other time and fully explore what we missed.

I was lucky enough to be joined by Carl, Kyrien, and Louisa. The four of us set out, beginning our journey with figuring out how to get to Fushimi-Inari Shrine, where there are over 10,000 torii or gates. I’ll spare you the details, but Kyrien definitely stepped in and helped out with many kanji I couldn’t read and figuring out some transportation aspects. Having grown up visiting Japan every summer, it is so fun to see what makes other people really happy or interested here. For example, Louisa was enthralled by how small the subway tickets we bought were, which I had never thought about — new appreciation! 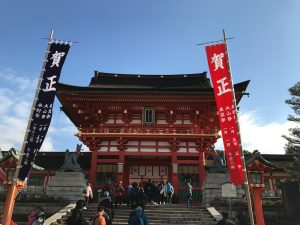 The entrance to Fushimi Inari. This specific entrance is thought to have been built by Toyotomi Hideyoshi.

I hadn’t read too much about Fushimi Inari Shrine, only the basic information to figure out how to take transportation there. I included it into our agenda for the day because several people had mentioned wanting to go there. When the four of us were walking toward the shrine, I was surprised to see a sort of market filled with street food vendors and trinket store lining the path (which we later visited and sampled on our walk back). 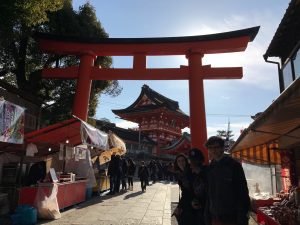 From left to right: Louisa, Kyrien, and Carl right before we entered the shrine area.

Once we arrived to the shrine, we put in offerings and decided to go see the path of a thousand torii. I was excited because this was the image photographed in many guidebooks and other information about Kyoto and Japan. I’ve even seen someone use it as their desktop background for their computer! As we walked through the gates and stopped periodically to look at the posted signs and maps, we quickly realized that this was not a twenty-minute stroll but rather a walk (really more closer to a hike with many stairs) up a mountain! As a group, we decided to give it a shot and make our way all the way to the top!!! (We later discovered that the estimated time is generally cited as anywhere from 2 hours to 4 hours! We thought we could do it in thirty minutes, and I think we finished in about 45.) 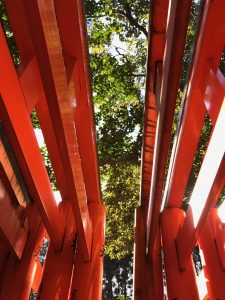 What I saw when I looked up as we passed through all the torii! Beautiful, right?

Before we headed up the path, an older Japanese gentleman approached Carl and fervently explained to all four of us that the Japanese people we were seeing here, who were not bowing before entering the gates, were not the norm and were acting improperly. He stressed the important of bowing before entering that gates (since it is through which the spirits pass) and asked us, as foreigners, to spread this message around. I thought his ardent passion was admirable, and I will be sure to let people know!

This is me giving an offering and praying at the shrine. This is at the bottom, before we went to the summit. Video shot by Carl:

In all honesty, I was not mentally prepared for this walk. I was wearing the wrong coat and shoes, and my bag was a little heavy — if you do go there, I recommend you wear a backpack, sneakers, and layered clothing you can remove if it is too warm over time. However, with the encouragement of my friends, and moment of re-orienting my mind with a little moment of counting breaths (a little dash of Zen?), the end of the hike was easily finished. The view was incredible! I paid my respects at the top, lit a candle and made an offering. It was beautiful. 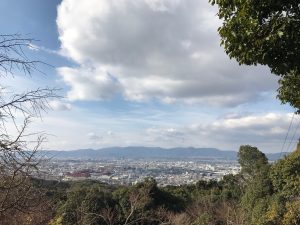 Not quite the summit, maybe half or two-thirds of the way up. 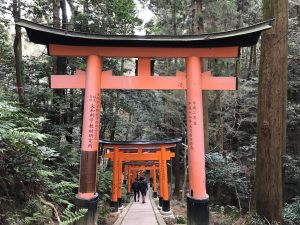 On the way back down. If you look closely, you can see Carl and Kyrien.

On the way down, we noticed a more rustic path and ended up pondering whether we should continue down it further once the clear path ended. In this moment, we thought we were making an active decision, but when we began the day together, the choice of going on and adventure had already been made! By sticking together and forging our own day, we were on a truly unique adventure. Although we decided to return to the designated path, the adventure together was already happening! 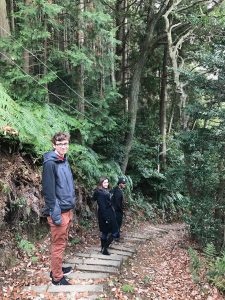 Here we are on the “off to the side” path (we aren’t sure whether it is an old path or a path that has another purpose) right before we realized it did not continue much further.

We tried to find the sacred mirror on display once we arrived at the bottom, but — likely because we were tired and hungry from the hike — we could not find it. We decided to cut our losses and head toward Ginkakuji, or the Silver Pavilion.

Once in the area, we took a lunch break at a soba/udon shop we collectively agreed on. The small size of the cups of tea and accompanying pitched of tea prompted us to ask for a refill two times, and I pondered whether the size was too small or we were too thirsty… 🙂 I think my favorite part of the day was the lively conversation and bonding with my classmates. All three individuals who I was with — Kyrien, Louisa, and Carl — are people who I did not know very well before but people I knew I wanted to get to know better. They are all such wonderful people, and many laughs were had during our conversations.

Ever since I had learned about Ginkakuji in sophomore year of high school, I have wanted to visit it. It’s historical and cultural importance were certainly felt as we neared the location. The beautiful moss (during this trip Louisa’s love of moss has begun to influence me, and I am now a moss fan as well) on the ground, wrapping around the tree, and even growing towards the water of the ponds, was calming and serene at which to look. When I translated to the man taking care of the moss that the moss was so beautiful and thanked him for taking care of it, he looked extremely happy! 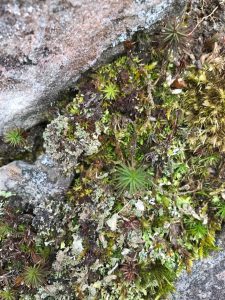 I just love how this type of moss was looking like mini-trees, standing out from the other types of moss. I love the different shades and shapes! So beautiful! 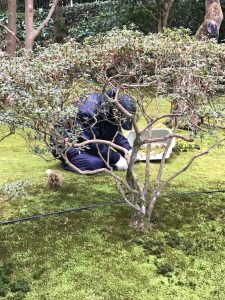 Moss caretaker hard at work, as seen through the branches of a bush! (Taken with his permission, of course).

Of course, there was the Pavilion itself. It was so beautiful, it looked like it must have been a movie set or something of the sort. As we left Ginkakuji, we took a stroll down the Philosopher’s Path (or Testugaku no michi), and we enjoyed the beautiful scenery, fresh air, and lighthearted conversation as we headed to look at the outside of Eikandõ, a temple and our last sight of the day. 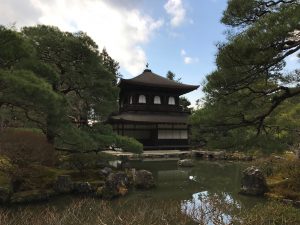 I had been worried about the day since the morning. Since I was planning the day, I felt responsible for everyone’s enjoyment and was worried about everyone using their time in Kyoto doing what they wanted. But I didn’t need to worry! Going to such historic and culturally significant sights with friends and viewing them without an academic lecture or tour was it’s own fantastic experience and one of wonder as well. The resulting conversations were not only inquisitive and insightful, but fun and heart-warming as well. 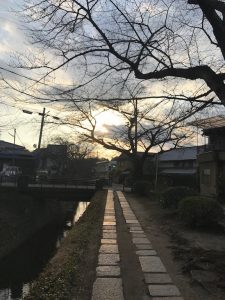 I feel lucky to have been joined by my classmates for this day, and I think we had quite the adventure together! 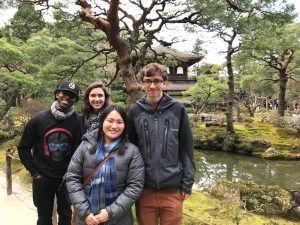 Kyrien, Louisa, Carl, and me in front of Ginkakuji.

P.S. I directed us onto the wrong bus once (almost twice, but luckily I asked the driver first the second time), onto the wrong train platform once, and had moments of near-misses, but through teamwork and a goodnatured easy-going-ness, we were able to figure it all out. Thank you to Carl, Louisa, and Kyrien for a great day out together!