Today was the day everyone decided to group up and go to see whatever they wanted to in Kyoto. I went off by myself since I woke up late, but it turned out to be a great time (despite my horrible bus map reading skills). First I walked around our hostel’s area and did some window shopping in Teramachi. Then I headed to 銀閣寺 (Ginkakuji -The Silver Pavillion) and hiked up a bit to get a gorgeous shot of the city.

The next stop was 北野天満宮 (Kitanotenmnagu) which is a shrine dedicated to the scholar Sugawara no Michizane who was ousted by the the de-facto ruling Fujiwara family. People believed that Sugawara was wronged and deified him as the god Tenjin. Now students go there to pray and rub the bronzed ox statues in hopes that they pass their exams, or improve their academics in general.

After that I kind of got a little lost looking for food, but after I found a Matsuya and had some delicious 牛めし(gyumeshi), I went to the Kyoto Imperial Palace. Home to emperors for years until the capital moved to Tokyo in 1868, I was overwhelmed by how simplistically beautiful the palace was. The gardens alone were so immaculately designed that I had to stare and admire it for a while. I even got a peek at the throne for the Emperor and Empress, taken aback by the sight of such a great symbol of Japan’s history and power. I couldn’t enjoy the palace for too long because I had to go to an appointment for a junihitoe fitting!

十二単 (Junihitoe) is the 12 layer kimono worn during the Heian period that was a fashion statement made by queens, princesses and noble ladies in an effort to both keep warm and make a show of their status. It took about an hour and a half for makeup, layering of the kimono and pictures, lots of pictures. I was able to get a framed one as well, so if anyone wants the experience, I highly recommend the Nishijin Textile Center’s experience. Wearing the junihitoe right after I visited the palace really cemented by adolescent feudal princess/queen dreams. It felt surreal to be clothed in such beauty and have even one percent of my dream fulfilled. 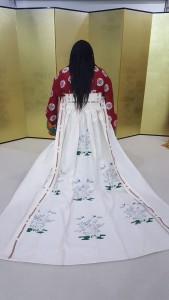 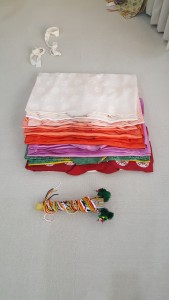