There are two opposing opinions on Noh’s connection to Buddhism in japan (one on either extreme), but influence can’t be outright denied. There are some who argue also that there is strong connection between Noh and Shintoism. 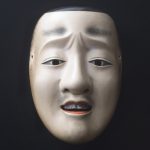 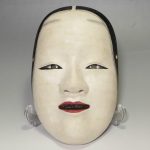 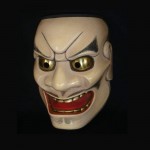 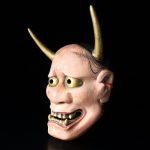 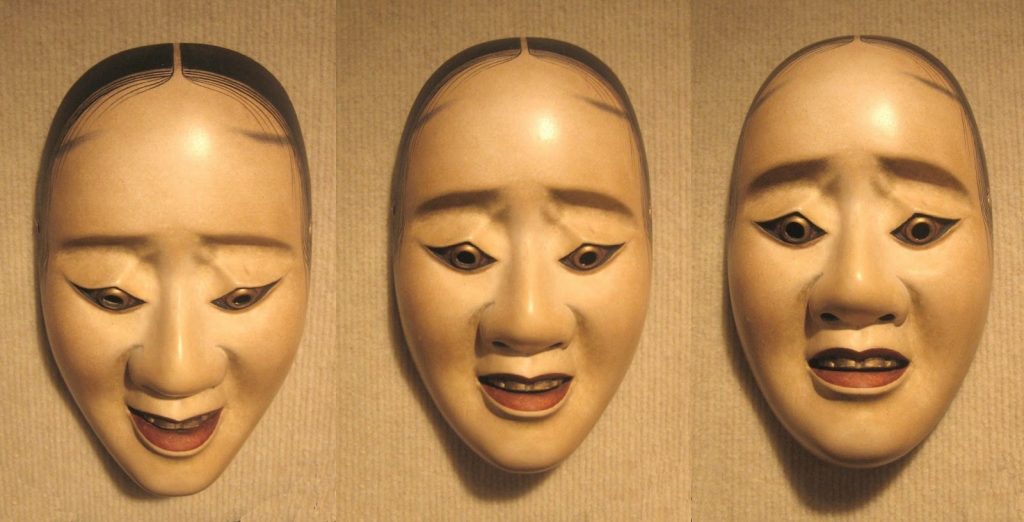 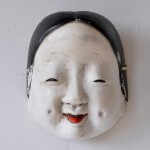 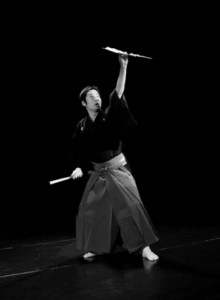 Though we researched together and talked about our thoughts, we came away with different things; as such our presentation focuses on each of our experiences within the same scope. 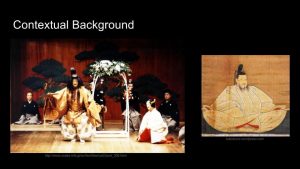 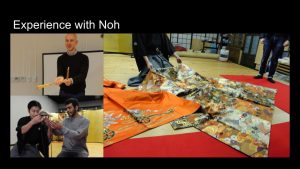 B: Personally, as I experienced Noh several things really stood out to me: The concept of ichigo-ichie was one of them and manifested itself in various forms including the fact that no play is fully rehearsed, but everything comes together in one performative bout. I also really appreciated just how much care was taken in the treatment of props such as masks and saw it as both a practical and spiritual tradition.

D: From my reading it felt like Noh was treated as a history, rather than a living performance tradition. I also thought that way much of the theory described was not very helpful. The work is written in a style that seems to prioritize fact; so the concept of hana becomes important when talking about how Zeami created it; some more metaphor would have been helpful. 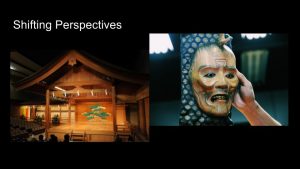 B: after seeing the actual performance, I think my appreciation of noh performers’ shear skill and versatility truly reached its maximum because I was actually able to witness it for myself. Little things like holding positions for long periods of time or moving in certain ways, I realized, made performing Noh exceptionally difficult in ways that would not be noticed off stage. I also had moments during which I felt as though the play stopped being simply a performance and I felt truly moved and like I was witnessing a spiritual ceremony taking place. Finally, I noticed the predominance of conflicts in Noh: they’re important because these Conflicts lead to the balance or imbalance of  yin and yang and eventually produces something worth performing. This conflict is what makes Noh beautiful to me.

D:  After watching the plays, and attending the lectures, I was struck by how deeply ingrained the concept of yin and yang is within the practice. Despite it being a theater of the “real,” where anything could go wrong at any moment and there is no best view, the plays are abstracted, idealized beauty. After actually watching some plays, I started to understand the aesthetic guidelines and philosophy a little more. In the second half of Haku Rakuten, a play that we saw, I even cried; the dance of the god Sumiyoshi was quite beautiful, and the music and calls of the chorus seemed to all come together perfectly, and even spiritually.

B: I saw my self splitting up different traditional practices into two categories in order to deal with this issue in my mind: on one hand you had practical traditions with very tangible and immediate results (treating masks with care and respect); on the other hand you had traditions who’s origins are less clear (seating arrangement on stage) or the purpose for which isn’t something “practical” per se (The hard to grasp classical Japanese used by performers).

D: After all the research and experience, I thought that the “rigidity” with which Noh seemed to be associated, was more a system for the preservation of beauty. In presenting I said that: the history and tradition act as seeds, the musicians as dirt, the chorus as water, and the acting as sunlight; the combination of which produces this flower that is Noh. 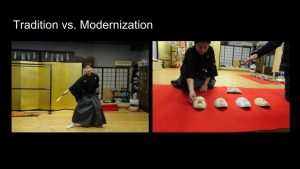 B: I could not make a decision on if I wanted to change the less practical traditions and keep the practical ones in order to make Noh more accessible internationally and to a more modern audience, but I felt like it was an important dialogue that should be held between the audiences of Noh and the creative minds behind Noh in order to reach an acceptable and beautiful balance (thus ending one of Noh’s conflicts, the one it has with the modern audience member).

D: I do not think anything about Noh should be changed. But education and workshop efforts, like those of Prof. Pellechia and Udaka-san, are important. Noh is much more enjoyable when you know what is happening.

We made our presentation in this style because, even though we were struck by different concepts and ideas, we both enjoyed Noh; we believe that many different people can enjoy Noh, for a variety of reasons.