On our free day, Kyrien, Louisa, Ayami and I decided to visit Fushimi Inari and Ginkaku-ji. We began at Fushimi Inari, a temple famous for its thousands of red gates. Feeling sporty (and admittedly having a poor understanding of the distances involved), we committed to reaching the summit of the mountain. After walking through a satisfyingly excessive number of gates we reached a map that told us we had only gone a fraction of the way to the top of the mountain. Flustered but determined, we carried on. The tightly packed gates were notable in their tendency to frame the path and exclude scenery far ahead and behind us. Because of this I found walking the trail to be an apt metaphor for the passage of time. We all walk a path and perceive events instantaneously; what happened previously and what will happen in the future become increasingly difficult to ascertain as the distance in time from the present increases.

The strong presence of the elderly in the upper reaches of the mountain surprised me more than anything else. As we were loitering around and resting at the top of the mountain a quick look around revealed we were surrounded by people who looked to be at least in their seventies. This was unexpected as the hike up was actually fairly difficult. Still, there’s no question that the average age of those at the top of the mountain was higher than those at the bottom. For me this highlighted a possible generational difference in Japan. Many of the elderly not only climbed to the top of the mountain but also spent time praying and paying their respects at the shrines there, something younger people didn’t appear to be doing as much. The older hikers were clearly motivated in large part by their religious beliefs

Ginkaku-ji featured resplendent moss and ground coverage. It sounds a bit silly but everyone in  the group was particularly taken by the vibrant green backdrop it provided. I don’t know if  it was the garden with the best layout or most impressive dry-landscaping I’ve seen thus far but the overall effect of it was the most magical. It was a nice reminder that meaning comes from consistency and detailing as often as from novelty and impressiveness. 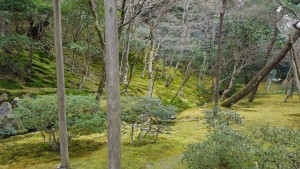 We finished the day with a walk down the philosopher’s path. It has a strange way of bifurcating into entrance/exit trails, which some of us interpreted as reflecting a person’s ability to follow or stop following your morals at different points. Someone commented that you could always just jump the fence to get on and off the path at will. Obviously they were joking but I thought the idea of getting onto the philosopher’s path by cutting moral corners was ironic yet sadly believable.