Today, we were free until noonish, so I met up with an old friend from japan that I knew from the summer. We actually met when we got of the plane from canada and travelled to Tokyo from Narita together. He’s now teaching english to elementary school students in Kifu. I met him and his girlfriend, a JET program english teacher in Kobe, at a coffee shop near Kyoto Station. After catching up on the last 5 months, we started talking about what its like to be a working class member of Japanese society and how different it is from studying or researching in Japan. Although he said that his hours aren’t too bad, his girlfriend said her hours are quite a bit longer and that social time can be hard too find. I have that being overworked is a norm in Japan and while she did say that her long hours are in large part due to how serious the english program in Kobe is, I’m not sure if this is a major theme of Japan or if long work hours are to be expected in any country depending on the job. 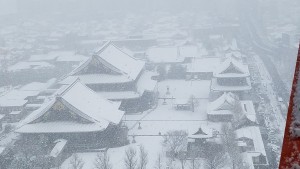 I said goodbye to them, and from there, I went to the Keizan Noh theater to meet up with the rest of the group. The first play we saw was Hakurakuten, a first category (meaning slow and god-themed) play. It was quite slow and formal. Slow enough to maybe put some people to sleep, evidenced by some of the people I saw looking around the room. That said, although I did not feel this myself, some people were truly moved by the play, even to tears. I think I’ll have to experience the play again one day to really understand this sentiment.

The next play we saw was Ikkaku Sennin, a fifth category (fast paced and demon themed) play. I enjoyed this play much more than the first, mainly because I was better able to follow along and because the plot seemed to progress alot quicker than the first play. I was not particularly moved by any thing but the clothing was much more interesting in the second play than the first in my opinion. I also happened to notice the musicians mess up the beat once or twice which in someways gives the play a bit of authenticity and uniqueness as the musicians never practice the piece and so mistakes are an inevitable part of the performance. Interestingly enough, Prof. Diego said that he also noticed some of the chorus members forget the words! I didn’t notice this at the time but it certainly gave me a giggle if not a whole laugh. Still, I have a ton of respect for these performers as it takes a particular kind of training to be able to study a play apart from the rest of the cast, present one day, and have to be perfectly in sync with a group that you’ve never actually practiced with.