This morning I decided to venture out to Kyoto tower. Once again, it was really refreshing to venture off on my own for a while. The snow was beautiful and the weather was actually warm in the morning. I had trouble navigating for a minute but I finally made it to the tower after about an hour. One thing I need to adjust to in Japan is the order of certain vending machines. Usually, in the U.S., you press what you want and then insert money. Here, it’s the opposite. It was a little embarrassing to press the button for the ticket and wondering why it wasn’t responding, but it’s just another lesson learned.

The view from the top was so beautiful with the snow falling. There were a lot of small pre-school aged kids there with parents and the atmosphere was actually quite calm and relaxing.

Afterwards, I browsed in a few stores before it was time to head to the theatre. I pulled up the directions on my phone and made my way to the bus stop. I started waiting for bus 46, but then my phone died, even though it was at 50%. I think the cold weather damages the battery, but either way, I felt slightly panicked. I had no idea how to get to the theatre besides getting on bus 46. However, the bus was already 10 minutes late, so I didn’t have time to run back to my room and get a charger. I decided to take the plunge and just get on the bus, having no idea where to go and hoping I wouldn’t get lost.

At first I was really nervous to get on the bus and kept imaging myself getting off and going home and charging my phone, but then I realized that I should just try my best not to miss the performance. I was shy at first, but decided to go to the front of the bus and ask if he knew where the theatre was. He knew which stop to get off on, which helped me a lot. The stop was right in front of a museum, so I asked them for directions and they gave me a map. I wasn’t fully sure at this point though, so I also stopped into a ramen shop to ask the owner for directions.

I was relieved to know that I made it to the performance on time, and I’m a little bit glad I got lost. It helped me feel more confident in my ability to get around and rely on my language skills. I also really enjoyed interacting with various people around Kyoto, who luckily for me, all happened to be very kind.

I also had my first omurice and my first purikura experience, which were both very satisfying. I’ve had a decent amount of international travel experiences, but never have I been so overwhelmed with new phenomenons as I have been since arriving in Japan. I already can’t wait to come back. 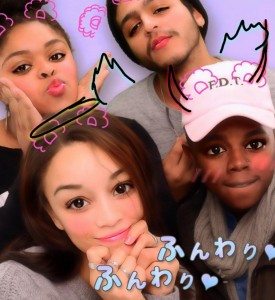