Today we met with Dairiki Amae-san and got the opportunity to Experience his style of Tea ceremony and the preparation involved. There were a couple things that stood out to me as vital to a “successful” tea ceremony which Dairiki either mentioned himself or hinted at, at various points during the day. 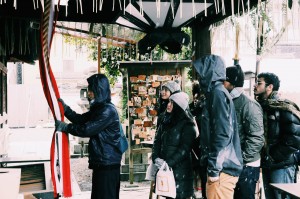 Dairiki-san expertly demonstrates how to pray at a shinto shrine.

One of the things that stood out was the general importance of maintaining certain traditions/ways of doing and preparing things for the purpose of tea ceremony regardless of how antiquated or inefficient they may seem. Dairiki talked a lot about how this desire for the more “analog” Stems from a desire to maintain certain aesthetic components which are associated with such a old tradition. 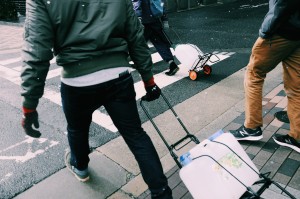 Throughout these past few days, I’ve noticed the recurring theme of the importance of aesthetics throughout various Japonaise traditions. Even if this tradition, like Buddhist statue making for example,  is at its core a religious/spiritual endeavor, the aesthetics associated with it also play a vital role in making that tradition what it is (sometimes even more so than the spiritual aspects). As someone who’s always been deeply aware of aesthetics (especially as it relates to fashion), I think this is amazing but can’t help but wonder why aesthetics mean so much more here in Japan than (as far as I’ve observed) they mean in other cultures/regions. Most European culture and religion I’ve either studied in depth or read up on slightly tended to center around the practical, or the devout and spiritual. the “look” of something is hardly ever considered more important than its actual function unless its direct result or final form is artwork specifically. 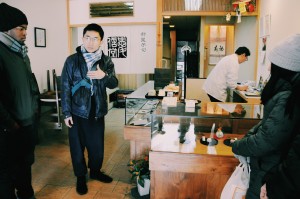 Dairiki explains how Japanese sweets have no preservatives and are thus made fresh everyday to be consumed on that day.

I think this prioritization of Aesthetics over the minute details or rules of a tradition like tea ceremony lends to the maintenance of what I think to be an even older (probably the oldest) Japanese tradition/philosophy. This “tradition” being that of acceptance and adaptation. Dairiki spent some time talking about how he incorporatrices this in his own practice of tea ceremony. He described it as a balance between not over-burdening and limiting oneself with strict rules (which would likely result in a dry repetition of the same procedure every time), but also not being so loose as to lose all meaning and semblance of that tradition. This, I believe, is where the Japanese value for aesthetics shine through the most, especially in the case of tea ceremony. Certainly there are many ways to “make” tea, but this, as Dairiki himself expressed, isn’t “tea ceremony” so it made sense to me when he said that trying one in his girlfriends “plastic-filled” apartment didn’t feel right–it wasn’t 茶渡. There’s a spiritual quality to Japanese aesthetics that I believe is separate from any specific religion or religious tradition and this results in the various unique traditions still flourishing in Japan today–though likely no longer (if ever) related strongly to any practical or specific religious purpose. In a sense, the duty or function of cleansing the soul goes from being a religious one to something that only certain aesthetics can carry out. 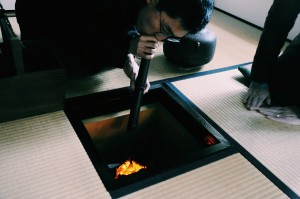 Dairiki prepares the hot charcoal that will heat up the water for tea.

I think this can be seen also in the way the Japan has historically (and to this day) been able to take, adapt and/or combine traditions, religions and cultures from various sources and create harmonious culture even with the presence of the smallest to the most fundamental contradictions. Dairiki spoke a lot about this himself and helped me see that this value of aesthetics over strict maintenance of ideology, functionality or tradition has allowed for the creation of some of the most beautiful art/traditions/beliefs observable in the world. 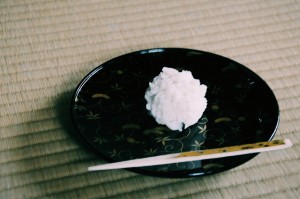 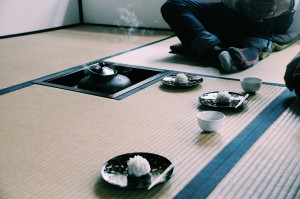 Enjoying a Japanese sweet appropriately named for the season (and the beautiful but very cold snow that day): Yuki-mochi