Today we toured Miyamoto-san’s workshop in Arashiyama. He creates and repairs wooden Buddhist statuary. While his craft is defined by many hundreds of years of technique and protocol, Miyamoto-san strives to innovate. He explained his desire to reach an ever-larger audience in the face of declining revenue from traditional sculpture. In order to achieve this, Miyamoto-san has taken aspects of modern culture and amalgamated them with traditional themes and craftsmanship. Many of his modern pieces feature cartoon-like caricature with bold coloration. These are intended to resonate with a younger audience and act as a familiar introduction to Buddhism and Buddhist sculpture.

The new statues are certainly fun, but I think the piece that best exemplifies Miyamoto-san’s work is the “Mary as Kannon” engagement statue he made for his wife, shown below. 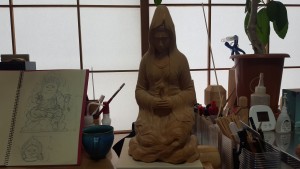 Mary is depicted in the likeness of Kannon, a Buddhist Goddess. She features a raised hood which suggests Kannon’s crown and holds a lotus flower. Furthermore, her necklace contains jewels symbolic of the years Miyamoto-san and his wife have been together. So the piece is ostensibly fulfilling a modern purpose as an engagement token but also reflects a 500 year-old story of underground Christianity in Japan and an even longer history of Kannon sculpture. This layering of meaning allows people with varied experiences to appreciate the sculpture. At each step there appears enough novelty to beg more questioning. People with little knowledge of religion might wonder why the statue would be appropriate for commemorating a marriage. Those versed in Christianity will question why Mary is wearing a crown and holding a lotus flower. The piece invites viewers to engage and learn more, a core purpose of Miyamoto-san’s work.

On top of creating original works, Miyamoto-san is responsible for restoring statues that are typically many hundreds of years old. This is often an arduous process involving rebuilding shoddy repairs and conforming as closely as possible to the original sculptor’s style. Miyamoto-san credits much of his technical prowess to studying how sculptures have been created in the past and imitating the different methods. I think he also finds solace in the fact that sculptures created centuries ago are continuing to be cared for. His optimism for the future of his craft is evident in the thought he puts into his repairs. He goes to great lengths to ensure that they are not only functional but clear and clean so the next artist to work with them has an easy time.