Today was another full and rewarding day. We started out with a fascinating visit to the Buddhist sculptor Miyamoto-san. He told us how he makes the sculptures (with over 150 tools!), what his personal philosophy and goals are, and what inspires him. As a sculptor who creates traditional Buddhist sculptures, as well as more modern, stylized versions, and also does restoration work, Miyamoto-san had a lot of interesting perspectives on tradition and modernity in his art. 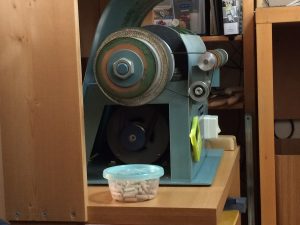 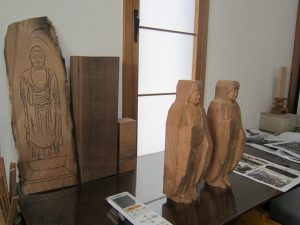 Even in his traditional sculptures, Miyamoto-san finds ways to add his own aesthetic, drawing on his experience in fashion design to make the design of the clothes especially soft, flowy, and realistic. Moreover, rather than seeing tradition as restrictive, he ultimately sees it as a rich and essential source of meaning; without it, he said, his more modern sculptures would have no meaning and there would be no point in making them. To that end, he employs traditional colors and plays off of established characteristics of Buddhist figures even as he modernizes them with his own aesthetic. For example, he took the idea that Bodhidharma meditated in a cave for so long that his limbs atrophied, and he sculpted a cute, colorful little Bodhidharma head, with moss and mushrooms growing out of it. He thinks that even if people don’t necessarily buy his modern pieces for their spiritual value, if he makes them accessible and appealing, people might then become interested in their spiritual meaning and, in this way, he can work to fill what he views as an existing hole in spirituality in Japan. 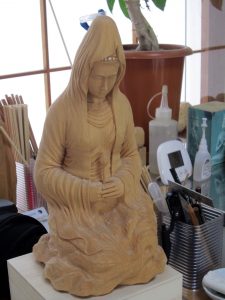 Miyamoto-san does not identify with or create sculpture in the tradition of a single branch of religion, but, instead, draws upon all of the Buddhist sects and even Christianity. He showed us a fascinating sculpture he’d made that was a fusion of the Virgin Mary and Kannon. The role of spirituality in his work was also evident when he talked about the eye-opening ceremony, which puts a spirit or soul into the wood of the statue. I found this particularly interesting in the sense that it doesn’t have to do with the craftsmanship of the sculpture itself but, rather, with spirituality and ritual. Again, he seems to see meaning almost as flowing from an external source rather than from him directly. I had the sense that he doesn’t feel that he creates meaning so much as he facilitates it or acts as a sort of conduit for it, creating statues to house spirits and doing so in a way that builds off traditions and their meanings.

In addition to drawing inspiration from traditional Japanese sculptors, Miyamoto-san looks to fashion trends, Japanese culture, and Western artists, in particular Michelangelo. He’s pretty unique in this way, but rather than seeing this as being in opposition to tradition, he resolves the tension by thinking about the ways in which many of the artists we now admire and view as ‘traditional’ and well-established were once innovative and daring in their own ways. I thought that this was a very useful perspective, especially as we often have a tendency to heroize figures as time goes on. I wonder if maybe Miyamoto-san’s work in restoration connects him to past artists and their work in a way that allows him to view them in a more realistic, humanized way. 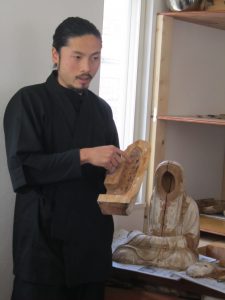 Miyamoto-san showing us how the statue that he’s restoring can be taken apart. The inside is hollow, and artists often write their names on the wood and sometimes even place objects in the statue.

Miyamoto-san told us that Zen Buddhism is a way of life, not just a religion focused on death and the afterlife, and I felt that you could really see that belief reflected in his work ethic and even the aesthetic of his house/studio, which was extremely clean and organized. Our visit and interview with him also made me think that the same could be said of his art; Buddhist sculpture as not just a profession but a way of life, a lens for thinking about and responding to the world. 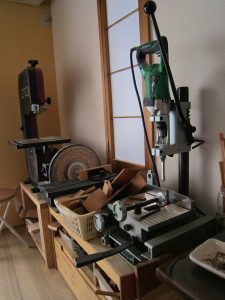 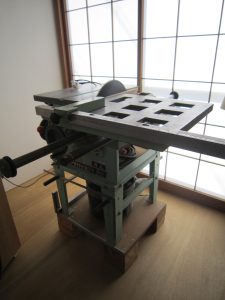 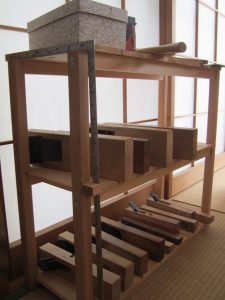 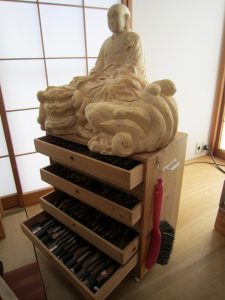 Ideas about meaning, spirituality, and lifestyles remained in my head when we had the opportunity to explore Tenryu-Ji Zen Temple after parting ways with Miyamoto-san. Having studied some Zen Buddhism, it was incredible to visit another very important Rinzai Zen temple, and, again, I was powerfully moved by the atmosphere of the entire place. Sitting in a practice room on the cool, soft tatami mats and meditating for a few minutes as I heard the birds and soft rustle of bamboo outside was a truly special experience. I also loved walking in and around the gardens. A pond with Koi fish, quiet little streams, stone lanterns, undulating mossy slopes, and blooming flowers were some of the delights that I discovered with each turn along the path. Especially magical was the Arashiyama bamboo grove, which transported me to what felt like an entirely different world. The light inside was a cool greenish purple, and I loved the way the bamboo swayed and whispered in the wind. 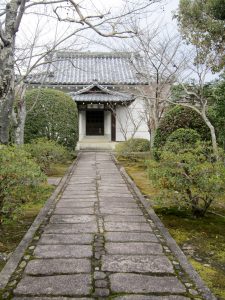 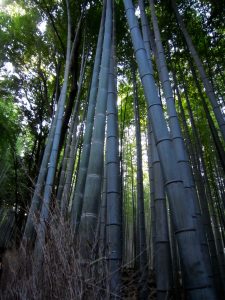 We finished the day with a trip to Nishiki Market, a covered market filled with little shops with all sorts of interesting and unique foods, including a variety of pickles, mochi, and a shop filled with all sorts of matcha foods, like matcha popcorn! Then we headed to a very nice grocery store (picture wooden floors and ceilings, tasteful layout of food, perfect looking fruit, etc), where I enjoyed browsing around. 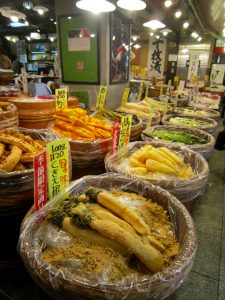 I had no idea that you could pickle so many types of vegetables!

We used these two shopping excursions as a chance to buy ingredients, and I had a lot of fun cooking dinner with everyone after we got back to our hostel. Ayami and I discovered that grilled avocado and sugar snap peas are delicious, and Cassidy taught us how to make sweet banana and chocolate gyoza. We also got to try Kyoto’s special soft tofu and some amazing Japanese strawberries, which were some of the sweetest strawberries I’ve ever had. A big part of what made it so special though was just spending time together as a group and having some good conversations.

From sculpture to meditation and gardens to shopping and cooking, it’s hard to believe that we did so much today. What’s really nice is that I feel like we’ve been doing a lot but also managing to have immersive and meaningful experiences. 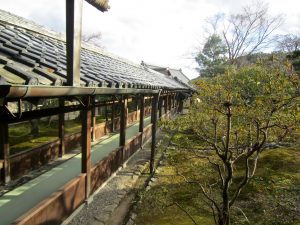 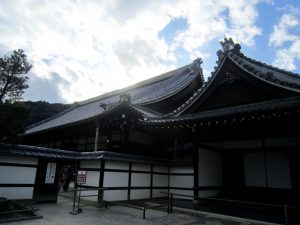 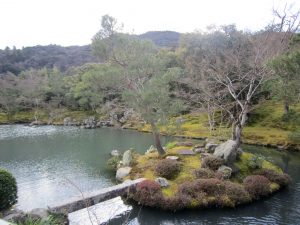 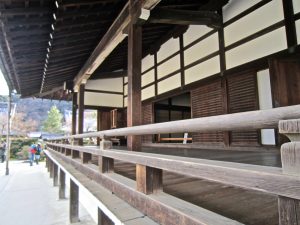