I thought it would be hard to follow the illustrious and historic site that is Daitoku-ji, but the second day in Kyoto was just as wonderful as the first, if not more insightful.

We began the day with a visit to Mr. Gakkyu Miyamoto’s studio and home. Mr. Miyamoto is a sculptor of Buddhist images — or in his words, he can sculpt or repair anything that might be needed or found in a Buddhist temple. After studying fashion design for five years, Mr. Miyamoto decided to go into Buddhist sculpture making, for which his teacher told him he was too old at 25 (most people begin training at 17 or 18). He worked twice as hard the other apprentices to become a full-fledged carver.

Mr. Miyamoto explaining how he created this sculpture.

Mr. Miyamoto uses over 150 small tools to create his pieces from wood. His signature focus/style is making the clothes on the statue appear real. Although there are certain dimensions of the statue that must meet a certain standard — how the hands are positioned, how big the face is, the shape and size of the eyes — this news about being able to add a signature style shocked and intrigued me.

When we asked further, Mr. Miyamoto shared that his work that is not for temples themselves aims to increase religious awareness and use of the temples in Japan. For example, he is holding workshops at temples across Japan, beginning in April, on how to do small wooden sculpture. Perhaps most fascinatingly, the work he does as this sort of outreach to the younger generations of Japan results in the most adorable and non-intimidating pieces that resemble children or even babies, or have a unique twist to them. However, he underscored the importance of maintaining Buddhist themes in such works. For example, the Dharma dolls he has created for such purpose have nature pieces on top, which is his own devising (he thought that since Dharma’s arms and legs atrophied during his years of straight meditation that perhaps living things could have come atop his head as well), but keeps the Buddhist thought of appreciation for nature. 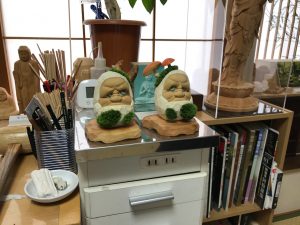 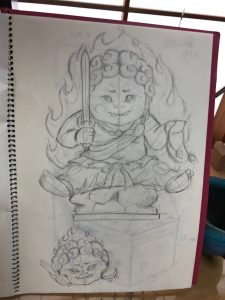 A design for a fudomyo. Notice how his legs are extended in a child-like manner — this is part of the modern design Mr. Miyamoto tries to work with. 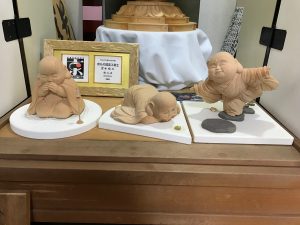 Our conversation with Mr. Miymoto continued upstairs where he showed us how he repairs the sculptures he is sent from all over Japan. Our class heard about different types of wood, how and why the sculptures are made from multiple, hollowed out pieces (prevent deterioration, to make light when there is a fire, and in which many different types of items, including bones and hair and scrolls, have been found), and then asked many questions. Among them, a key question from David about preparing to repair or build a sculpture  resulted in the most interesting information: there is a ceremony called houryou, or the eye-opening ceremony, during which the priest puts in a spirit or soul into the sculpture. The opposite ceremony is performed when a sculpture is sent to be repaired.

I learned so much about Buddhist sculpture work during this time, I could not possibly write it all down. My favorite discussion during this visit was the conversation about how to approach Buddhism. Mr. Miyamoto does not prescribe to any particular sect of Buddhism. He admires and respect Oshakasama and finds his teachings to be a way of life or even a life philosophy. He encouraged us to study the Oshakasama teachings of chūdo. In fact, Mr. Miyamoto finds inspiration from the contemporary fashion world (figures such as John Galliano) as well as other world religions, such as the Maria-Kanno he created for his wife for their engagement. All in all, Mr. Miyamoto was one of the most interesting people with a fascinating professions!

We then headed to Arashiyama through a nice, brisk walk in the crisp winter air. After enjoying lunch, we toured Tenryū-ji and its surrounding garden. Here I had the most insightful moments of the day. 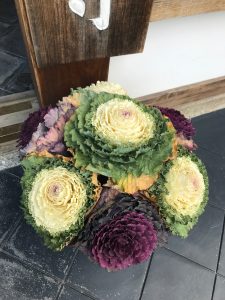 A traditional new years arrangement outside of Tenryū-ji. Who knew cabbage could be so beautiful!?

The clean, beautiful temple, combined with Mr. Miyamoto’s words about Buddhism as a way of life ringing in my head, prompted me to think about Zen as a way of life and the idea of living in such a clean and thoughtful manner. After Louisa taught me the most extreme basics of za-zen or zen meditation (which I thoroughly enjoyed in the quiet space of the temple), I began to think of how many of these teachings are already in tea ceremony, and how I can incorporate them into my daily life. 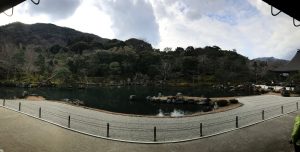 While walking around the gardens with Louisa, I had a nice conversation with her about these thoughts, and it turns out she had been thinking about similar things as well. I know I will personally continue to think about this throughout the trip and possibly may come up with a list to include on the last post about how we can all include a little more zen in our daily life. As Mr Miyamoto says, “the way we eat, the way we clean can be zen. It’s not just about praying.” The video below is of part of the garden that really made me think about zen in daily life:

After grocery shopping in the most fascinating shop-street and then a very fancy grocery store (I unfortunately have no pictures because I was so tired and forgot!), our whole class worked together to make a great dinner! I’m pretty proud of the way we put everything together in unique ways (I learned about choco-banana gyoza, which is so delicious!), and sitting and eating together while having such joyful conversation is probably one of my favorite parts of this trip! 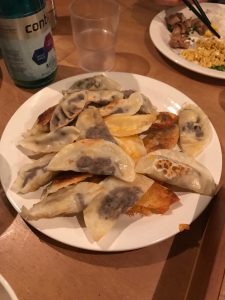 Choco-banana gyoza, which Cassie taught us how to make! 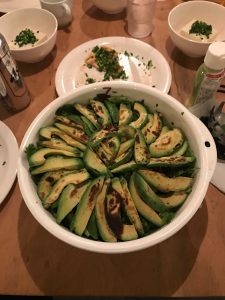 Louisa and I teamed up to make a salad. We decided to grill the avocado, which turned out quite nicely!

Listening to the bamboo trees in Tenryū-ji sway back and forth as the sunlight dropped through and the wind rustle against the leaves and my own skin, I felt so calm and at peace. This trip has been entirely incredible thus far!