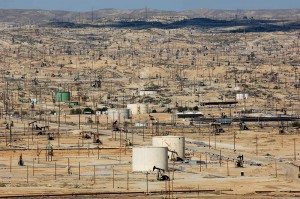 1.    Kern County: Where residents and their allies act in defiance

Later that year, in July, Rodrigo Romo sues California Governor Jerry Brown and the Division of Oil, Gas & Geothermal Resources. Romo fights for his two daughters, seeking to eliminate the source of their severe asthma and epileptic attacks.[4]

On November 6, 2015, Javier Cruz wears a poster around his neck, sitting in a lawn chair outside the Kern County Board of Supervisors building in Bakersfield, CA. Black words across neon orange paper insist “No Fracking in my HOME!” Cruz and his fellow community members recently embarked on a four-day fast to protect their dignity and their children’s future.

Activists march, Romo fights, and Cruz fasts to put an end to the hydraulic fracturing and oil extraction in Kern County that jeopardizes residents’ health and their environment. Hydraulic fracturing (fracking) is a process used to release and extract oil or natural gas from reservoirs with low permeability and porosity. Developers blast large volumes of water mixed with sand and a slew of toxic chemicals deep underground in order to fracture the rock.[5] To understand what motivated Romo, Cruz, and the 8,000 activists protest against fracking, let’s rewind five years to 2011.

2. Kern County: Where bureaucrats fail to protect their constituents

Derek Chernow once served as the former acting director of California’s Department of Conservation. Chernow claimed in court that back in 2011, Governor Jerry Brown ordered him and then-State Oil and Gas Supervisor Elena Miller to fast-track permits for risky oil and natural gas extraction, bypassing substantial environmental reviews required under the Federal Safe Drinking Water Act.[6] Chernow and Miller refused. The next day, Brown fired both. Fracking activity in the state then grew rapidly; Governor Brown reported six months later, “I fired them, and oil permits for drilling went up 18 percent.”[7]

In 2013, Governor Brown signed into law Senate Bill No. 4, the state’s first piece of legislation that directly regulates fracking activities.[8] However, the bill omits regulations that are key to ensuring public protection from environmental harm. For instance, Senate Bill No. 4 contains no setback clause governing the distance of new oil and gas wells from sensitive land use areas such as public schools, residences, farms, or orchards.[9] California’s fenceline communities need protection from fracking fumes, and Senate Bill No. 4 falls short.

More recent attempts to manage the impacts of fracking on California communities and the environment have crumbled under the pressure of groups such as the Western State Petroleum Association, California Independent Producers Association, and Independent Oil Producers Agency, often collectively referred to as ‘Big Oil.’ An unprecedented $22 million of oil lobby money flooded the state legislature in 2015.[10] Big Oil effectively gutted or defeated bills that the oil industry opposed.[11] For instance, it delayed or weakened key clean air legislation, like the emission targets of Senate Bill 32 and the clean energy goals of Senate Bill 350.[12]

On November 9, 2015, the Kern County Board of Supervisors dealt a further blow to their constituents. The Board unanimously voted to pass an oil and gas zoning amendment for the county, an initiative funded by oil industry groups[13] that approves up to 70,000 new wells en masse, under one environmental review. Those who drafted the zoning amendment claim that the associated environmental impact report thoroughly addresses the impacts of new oil and gas projects over the next quarter of a century, an impossible achievement.[14] This spatially and temporally broad review cannot provide the site-specific descriptions of projects and their expected impacts at the time of installation, which are fundamental to an informative, legally sufficient environmental impact report.[15] With the new amendment, oil and gas producers can now obtain a permit to drill new wells in as short as a week, without holding public hearings.[16]

The liquids used in hydraulic fracturing can be described as a “toxic soup of chemicals.”[21] Of 353 common constituents of fracking fluid: 75 percent have been found to affect the skin, eyes, respiratory systems and gastrointestinal systems; 40-50 percent can impact the kidneys, the central nervous system, the immune system, and the cardiovascular system; 37 percent are known endocrine disruptors; and 25 percent are associated with genetic mutations and cancer. The toxicity of this soup increases as it mixes underground with water that can contain heavy metals and radioactive materials. Between 10 and 80 percent of the fluid resurfaces after the extraction process. Volatile components evaporate into the air. This toxic soup has made its way into nearby surface water and groundwater,[22] as a result of malfunctions such as backflows at the well heads, well casing failures, or pipeline leaks.

Noise and light pollution linked to stimulated oil and gas wells is often extreme and prolonged. Trucks, generators, pumps, and drilling operations contribute to the clamor. Natural gas that is not captured is flared (burned off) at all hours of the day, generating an incessant roar and intense light. Health consequences of noise and light pollution include sleep disturbances, fatigue, high blood pressure, and cardiovascular issues.[23] 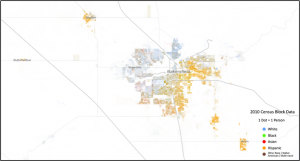 Kern County residents already bear hardships from environmental pollution. The 839,631 residents of Kern County, 50 percent of which identify as Latino[25] (see dot map above), breathe contaminated air. The air quality in Kern places amongst the worst in the nation. The American Lung Association published a report in 2015 that ranked Kern County as number five in a list of the most ozone-polluted US counties, number two in a list of US counties most at risk of short-term particle pollution, and number two for year-round particle pollution.[26] A total of 63,430 active and new oil and gas wells dot Kern County, the epicenter of California’s fossil fuel industry. That’s almost 75 percent of all the state’s active and new wells.[27] In addition to leakage of benzene and methane from oil production, pesticides and exhaust from the agricultural industry make Kern County’s air quality poor. Kern County constitutes the southern portion of the San Joaquin Valley. In the Valley, asthma is technically an epidemic, with one in six children diagnosed with the disease before the age of 18.[28]

As fracking expands in California, Latino and African American communities in Kern County shoulder the greatest risk of adverse health impacts.[29] In 2014, the NRDC found that people of color make up almost 92 percent of the 1.8 million Californians living within a mile of oil and gas development in communities already grappling with heavily polluted air and water, as well as pesticide exposure. In Kern County, this number is 76 percent.[30] The county’s low-income, rural communities of color are “at the frontline” of new drilling technologies and the associated dangers of air pollutants, wastewater disposal, heavy diesel truck traffic, and wastewater disposal.[31] A 2014 study found that school campuses with a larger percentage of Latino and other students of color are more likely to be in close proximity to oil and gas wells. Furthermore, the great majority of students attending school within 1 mile of an oil or gas well are non-white (79. 6%), especially Latino (60.3%).[32]

New stimulation notices filed under Senate Bill No. 4. All but three of the mapped stimulations are located within Kern County.[33] Well stimulations, including hydraulic fracturing, are techniques that improve the flow of hydrocarbons into the well.[34]

What would environmental justice look like, in contrast to the situation in Kern? The EPA defines environmental justice as, “the fair treatment and meaningful involvement of all people regardless of race, color, national origin, or income with respect to the development, implementation, and enforcement of environmental laws, regulations, and policies…It will be achieved when everyone enjoys the same degree of protection from environmental and health hazards and equal access to the decision-making…”[36] Kern County residents, and residents of color in particular, bear a magnitude of the externalities entirely out of proportion to their “fair share.”

The lack of sufficient fracking regulation in California, such as setback clauses, shatters any illusions of equal protection under environmental laws. Weak laws also stifle public participation in environmental decision-making processes. Attorney Madeline Stano of the Center on Race, Poverty, and the Environment explains that extraction companies and government officials are not required to provide notice to students, parents, teachers, or school officials when fracking will occur close to schools. Ordinances like the revised Kern County zoning law further exclude community members from the process of developing environmental laws, granting oil and gas producers permission to bypass public notice and hearings.[37]

A fracking well next to a playground at Sequoia Elementary School in Shafter, Kern County[38]

4. Kern County: Where community members and their allies refuse to keep quiet

On February 7, 2015, 8,000 Californians gathered in Oakland for the March for Real Climate Leadership, which shaped up to be the largest anti-fracking demonstration in U.S. history.[39] The activists demanded that their Governor lead efforts against climate change by discontinuing fracking activity in California.[40]

In July, 2015, Rodrigo Romo sued Governor Brown and the Division of Oil, Gas & Geothermal Resources on behalf of his daughters, stating that they had come down with severe asthma, and in one daughter’s case, epileptic attacks, ever since well stimulations began in close proximity to their public schools in Kern County. Romo claims that in omitting setback clauses, Senate Bill No. 4 violates the anti-discrimination provisions of California government code. The overseeing judge dismissed the case, but Romo will appeal his decision.[41]

In November, 2015, Kern County community members and supporters engaged in a four-day fast and a mid-day rally to protest a proposed oil and gas zoning amendment. The amendment would relax the oil and gas corporations’ responsibilities to provide thorough environmental reviews and public hearings before opening new wells.[42] After the Kern County Board of Supervisors unanimously approved the zoning amendment, the Sierra Club and an alliance of community and conservation groups filed a lawsuit against Kern County, claiming that the amendment jeopardizes the health of hundreds of thousands of people living in Kern County.[43]

Kern County communities demand that those who claim to represent them actually consider their voices. Rodrigo Romo said, “…because we are Latinos or because we don’t speak English, [Governor Brown] thinks this will keep us quiet. But I don’t see this as a boundary for myself, nor will it keep me quiet.”[44]