“‘I would cough so bad, ooh, it feels like I’m going to throw up…sometimes I couldn’t breathe so bad I thought I might die.’”[i] These are the words of Sadi Fontana, a seven-year old living in a sixth-story public housing unit in Harlem. He has asthma, as do many of New York City’s 400,000 public housing residents.[ii] The disease has, indeed, become an epidemic across the country, but particularly in urban areas. Within New York, Harlem and the South Bronx have the highest concentrations of childhood asthma.[iii] Asthma has symptoms like those Sadi describes — shortness of breath, wheezing, nausea, headaches.

In a class action suit filed in 2013, Upper Manhattan Together, inc. and South Bronx Churches, Inc. claim the New York City Housing Authority (NYCHA) is responsible for the epidemic. Their suit asserts high levels of mold in housing projects cause asthma.[iv] But is this asthma epidemic and the mold that causes it an incidence of environmental justice, or simply a result of unfortunate living conditions? To determine whether that is the case for Upper New York City, one must first look at the history of Public Housing in New York to understand the system that the plaintiffs in this case claim is responsible for their illness.

When urban rehabilitation programs began in the 1950s, NYCHA built public housing units hastily. They were poorly constructed, high-rise buildings often separated from other neighborhoods and devoid of public amenities.[v] Many of the original public housing units of the twentieth century have been updated and re-built in “attractive town homes and apartment buildings”[vi] However, developments in Harlem and the South Bronx, like Webster Morrisania, Rangel, and Drew-Hamilton, remain high-rise.[vii] The implications of high-rise public housing are actually quite dire. In other words, if neighborhoods are mixed-income, they will be more economically successful and contain better resources. Now, a high-rise unit does the opposite. Not only does it segregate its residents, but it does not attract any higher-income residents. With that, very few businesses and public services will come to the area, and the residents are left with “inequality not just in housing but in all aspects of social and economic life.”[viii]

New Yorkers still live in these sub-standard housing units, and so the communities of NYC housing projects are, given the history of public housing and no fault of their own, subjected to harsher living standards than other communities. Furthermore, the housing communities created during the 1950s were strictly segregated, and exhibition of institutional racism.[ix]

The implications of this inequality are not just economic, but also racial: the populations of the South Bronx and Harlem are 52% Latino and 35% black.[x] Proportionally, the Bronx is home to almost three times as many immigrants as the United States as a whole.[xi] More than half of (Bronx?) residents speak a language other than English, and the average household income is almost $20,000 below the national average.[xii] Research shows a link between all public housing and poor living conditions. Tenant selection policies traditionally skewed public housing to the lowest possible income bracket, creating risk of disease, “chronic joblessness,” and illegal activity in those housing developments.[xiii] Furthermore, the voucher system for entering public housing has little guidance and leaves families of color in the worst possible neighborhoods,[xiv] in which the housing is often in disrepair and run-down condition at the hands of negligent landlords.[xv] Housing in the South Bronx and Harlem fits these patterns, and in the case of mold and asthma, the negligent landlord is NYCHA.

Damp, moldy housing conditions in NYCHA housing are today made worse by negligent processes of fixing those problems.

Mold, which is common in NYCHA housing, exacerbates asthma symptoms, and what’s more NYCHA is aware of this connection and makes note of it in its “A Home to be Proud of” publication.[xviii] Furthermore, the agency put off or ignored mold-related maintenance requests for long periods of time, claiming they had lost them.[xix] When NYCHA did respond to complaints, though, their process was flawed: the agency’s mold policy notes that water damage is the underlying cause, but requires only a visual assessment by a maintenance staff to assess mold growth. This visual assessment cannot account for all sources of mold in an apartment.[xx] Presence of a plumber was never required, and there were no limits on the toxic chemicals used inside apartments to eliminate mold.[xxi] Not only did NYCHA often fail to respond to mold complaints, but when they did the staff members disregarded residents’ safety.

Oscar Cruz, a resident of Webster Morrisania Houses in the South Bronx, described his personal experience with NYCHA’s dangerous mold response practices to a reporter at citylimits.org: “[NYCHA] said the problem was a neighbor’s bathroom wall and they fixed that. On May 22, housing came and spread a chemical in the bathroom to kill the mold. I told them I guarantee you this is not going to solve the problem. Today (July 3), the mold came back.”[xxii] Often, though, the repairs wouldn’t even involve identifying a cause, and instead maintenance staff would simply paint over the walls and tell residents the problem was solved.[xxiii]

Not only are residents forced to live with mold on their walls and ever-present danger of asthma, but they are subject to poor practices on the part of NYCHA.

The neighborhoods involved in this lawsuit are certainly a part of the legacy of systematic segregation in this country, as seen in part in the foundations of public housing policy and infrastructure. Decreased access to public amenities, like healthcare or access to legal aid are a direct result of the segregationist high-rise housing system with its roots in a racist American past. Residents of housing projects in upper NYC are subject, not of their own doing, to not only the negligence of NYCHA and molding walls,[xxiv] but also the dangers of other environmental hazards in the surrounding area, like dangerous waste management facilities and diesel fuel busses.[xxv]

Yet in the home, where the poor conditions are a vestige of racist policy and patterns, NYCHA residents are blamed for poor management of their health. The very New York Times article that quoted Sadi, the 7-year-old, later stated condescendingly that “with some families, it becomes a matter of simply teaching them how to clean house.”[xxvi] Furthermore, solutions place burden on individual families to “keeping house” well.[xxvii] Does this type of policy not underscore the manner in which these communities are marginalized? Even when the hardship of residents’ public housing realities are exposed, powerful institutions still blame the residents themselves. The class-action lawsuit of two years ago demonstrates that marginalized communities often have to be their own advocates, as they are the only ones aware of the injustices with which they live. 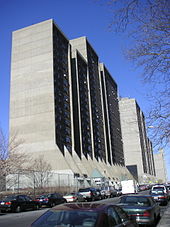