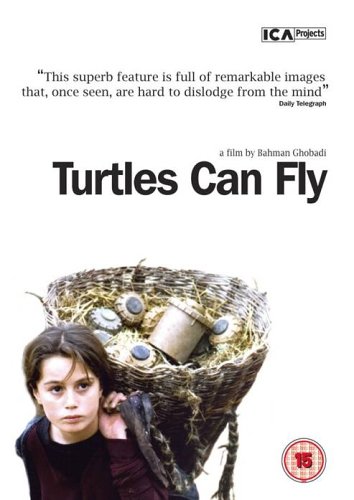 In the eighth grade I was introduced to the most horrifying film I have ever seen. I am no expert critic of horror or drama film. As a person who considers herself a fan of both genres, however, and as someone who has seen innumerable films of both types, I can say with confidence that no film left me more disturbed than Kurdish Bahman Ghobadi’s 2004 movie “Turtles Can Fly.” Its plot could be best described as every parent’s nightmare, with hundreds of orphaned children living in an impoverished war territory. Picture the tragedy of a movie like “The Boy in Striped Pajamas”, but multiplied and compounded by dozens instances of children in distress. I am talking about a movie that’s effects on the viewer are hundred times more heartbreaking, and infinitely more traumatic. So traumatic, in fact, that 8th-grade-me, along with many of the friends I watched with, had to watch multiple episodes of Modern Family right after finishing “Turtles Can Fly” to prevent sudden teary outbreaks at any point later that day. Yet, in a movie that appears to be so dystopian, expressing the horrors experienced by the Kurdish children living in Iraq near the Turkish border, Ghobadi decided to include certain events that express themes inconsistent with the mood of the rest of the film. That is, throughout the film, it appears that there are glimpses of what might be considered by some, a utopia.
Symbols representing traditionally considered virtues or of positive utopian notions contrast with the scenes they lay in. “The red fish”, for example, representing a beacon of hope, is a spot of color in a world of grey and reminds us of the beauty still left in the world. In the film it seems a bit out of place as it appears after a scene about how three children drowned looking for said fish, and is followed by an unhappy young girl running off home from the river to deliver water to what is left of her family. Or for example, a scene where a boy’s leg being blown off by a land mine contrasts with the symbolism of an arm broken off a Saddam Hussein statue, representing the breaking away from the oppression of Hussein and the beginning of a revolution that potentially could lead to peace.

Making the argument that this film has an utopian aspect based off these few symbols is a bold position. The waves of positivity from these symbols, however, is reinforced by various random yet significant acts of kindness and perseverance scattered throughout the film. In the town where the movie was filmed, everyone is equally poor and living in the same fear that any day the town can be attacked and and life would end, yet everyone keeps relatively calm and works together to make the most of the situation. Surprisingly enough, even the children become equal to adults as they take on many adult jobs like mine defusing, bartering for satellites and guns in a nearby town’s marketplace, gas mask distribution, or for one of our protagonist, managing large bodies of people to complete such tasks.
In addition to this unity of young and old coming together to create a better environment, there is an overall embrace of the disabled members of the community, another surprising silver lining to the horrors displayed in the film. There are scenes where one’s disability is used as an insult, but for the most part these disabled people work and are treated as everyone else. In fact, the managing protagonist even goes out of his way to make amends with another protagonist, an armless protagonist, that he has had previous quarrels with. While the manager may not be a fan of the armless boy, he puts his personal issues aside and tries to keep his composure to maintain peace. The crippled protagonist also offer’s some examples of kindness, as he goes out of his way to make sure that his own sister does not do anything to harm of her child (that, I should mention, was a result of a rape by a member of band of guerrilla fighters that came to their town.) In addition, in between scenes of our managing protagonist screaming at children working, and quarrels (sometimes ending in a bloody nose) between the two male protagonists, the crippled boy offers help to the managing kid, just to benefit the greater good and safety of all people.
These two aspects, along with some reoccurring positive references to America, combine to point to a central beacon of utopian hope: American Intervention. Following a scene where our single female protagonist, the sister of our crippled protagonist, has a flashback to the night she was sexually assaulted, there is a scene of hundreds of people gathering on a hill to have American helicopters fly overhead and drop flyers with phrases like “It’s the end of injustice, misfortune, and hardship.” and “We will make this country a paradise.” This scene of America-provided inspiration to carry on fighting through the town’s harsh life is followed by the image of a group of kids going to a marketplace to try and buy machine guns with land mines (AMERICAN lands mines to be precise).