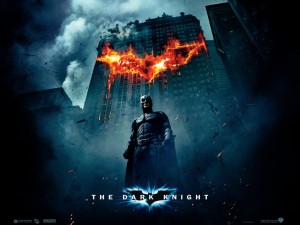 For those of you who, as children, wanted to grow up to be a “superhero,” like Batman, I presume “fascist” was not part of the job description. The Dark Knight, a 2008, Christopher Nolan blockbuster, shows us that justice is not absolute. Our beloved childhood superhero, Batman, isn’t so ideal. Though a superficial, with the grain reading of The Dark Knight would go along with the consistent depiction of the Batman in various other films and comics, Nolan attempts to show us that justice has shadings, and they are not as clear-cut as they might seem. The mere fact that the film was named The Dark Knight licenses some curiosity in even the least skeptical of critics. For the sake of making my argument even clearer, Batman is not the knight in shining armor we might see him as, on the contrary, he is a knight that works in the shadows, a vigilante. Because he attempts to solve the problems of crime plaguing Gotham, we see him as a hero, however, audiences overlook the fact that his actions fit the mold of a blatant fascist. Batman steps outside the legal realm to engage in violence and, more often than not, infringes upon the privacies of the people of Gotham. He reserves the enforcement of justice for elite like himself. Complementing this, his nemesis, the Joker, is an anarchist, priding himself on the destruction of societal norms. The film is actually more of a dichotomous relationship between fascism and anarchism, where the true colors of Batman shine through. Even the seemingly most pure symbols of justice are flawed.

Though this goes without saying, the Joker is not in the slightest sense a materialist. Yes, we see several scenes associating the Joker with money, but it becomes quite evident that the Joker is not your average “money is power”-type criminal. He torches Gotham’s mob’s extorted funds without batting an eye. The Joker professes, “It’s not about money, it’s about sending a message”. Withholding money from those who want it most is his way of gaining attention in the capitalist economy. Alfred makes the piercing observation that, “Some men…they can’t be bought, bullied, reasoned, or negotiated with.” This is precisely why the Joker is untouchable. The Joker has no material desire. Nothing can lure him out of his cage. The fact that he has nothing to lose, only a drive for means (and not ends), makes him close to perfect. When threatened by Batman during his interrogation, the Joker remarks, “You have nothing to hurt me with.” Pain is fleeting. The Joker has no Achilles heel. His nihilism makes him a devout anarchist. 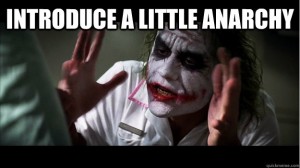 Whereas it is evident that forces of good, like Batman and the law, attempt to contain situations, what makes the Joker’s character so powerful is lack of control. The Joker gets off on the fear that causes mayhem and disorder in society. He explicitly says to Harvey Dent in Gotham General, “I try to show schemers how pathetic their attempts to control things really are.” Control means you have and end. It means you are vulnerable and expendable. Essentially every attempt by the “good guys” to contain situations is their undoing. The Joker goes on to explain, “Do I really look like a guy with a plan?…I’m a dog chasing cars.” A lack thereof a plan means that there are no expectations. The Joker is just a grown up version of that delinquent child who would always exceed expectations (and I don’t mean this in a good sense). Rules were there to be broken. The Joker is a blatant anarchist because his sole purpose is to tear at the roots of society, taunting those with a plan. The Joker even says, “I just did what I do best. I took your little plan and I turned it on itself.”

When it comes to Batman the great, Batman the fascist, we are blinded by our naiveté. Batman is supposed to be the hero, enforcing justice where the law cannot. We so very much want him to be perfect. So what if he has a little bit of a power complex? The Dark Knight’s authoritarian tendencies are evident very early in the movie. The opening scene of the film depicts ruthless mob members, who cringe at the sighting of the menacing bat-crest that lights up the sky. When the Dark Knight is done beating up the mob-members, one of the bandwagon, copycat batmen asks, “What’s the difference between you and me?” The response given is one implicit of power and wealth. Looking past the fact that Bruce Wayne is a smart, billionaire, playboy, trust-fund child, Batman uses his wealth and resources to act in ways the law does not. Whereas Gotham Police can’t afford high-tech, carbon-fiber armor, cutting-edge, military grade vehicles, and gadgets that seem to be handy in the worst of situations, Bruce Wayne can. The film’s audience is blinded by the fact that everyone wants to be a smart, capricious, billionaire playboy. We overlook the fact that his money gives him power, which he uses to act in ways he sees fit. Much like the Joker uses fear to stir society, Batman uses fear (in conjunction with brute power) to control crime. In a sense, Batman’s power goes beyond controlling law offenders as he also holds sway over law enforcement. The police won’t arrest him—Commissioner Gordon is essentially his puppet. Gordon gives Batman priority over raids, investigations, etc. Clearly this is a blatant transgression of what law is supposed to be. Batman is the muscle who acts in ways the police can’t and won’t physically and legally act. In a sense, Batman has monopolized every aspect of society. His power lets him enforce justice the way he sees fit, and, in turn, he walks unscathed. The Dark Knight is premised on totalitarian control of the justice system. Gotham is a corrupt city, even under the guard of the Batman. 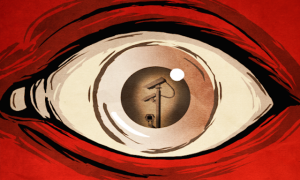 Batman takes the Patriot Act to a whole new level. The Dark Knight goes beyond visible power tactics by formulating a highly-illegal, complex cellphone surveillance system to monitor society for threats. Batman infringes upon the privacies of each and every citizen of Gotham. Lucius Fox, the head of Wayne Enterprises, recognizes that the machine is “too much power for one person,” but, of course, concedes to the rhetoric of the Dark Knight and provides his services. Mass surveillance is a blaring signal of Batman’s fascist tendencies. Not only does he use money and power to influence and control people, but he also monitors the most intimate, undisclosed facets of people’s lives by turning their cellphones into pulse-generating, live microphones. As no one is beyond the reach and influence of the Dark Knight, we must ask, what are the limits of good intentions? Batman wants to keep society safe, but, in doing so, is he justified in infringing upon other basic liberties?

Anarchism and fascism are at odds with one another throughout the film. As these two forces duke it out, Nolan attempts to show the audience that a normative view of justice is nonexistent. Justice has shadings, and for every person there is a tipping point. The Joker mocks Batman, “You are truly incorruptible, aren’t you?…I think you and I are destined to do this forever.” Evidently the weakness of the Dark Knight is his compulsive sense of justice. The Joker and Batman are at odds with one another just as disorder and an obsessive urge for control oppose one another. The system is in constant swing.

Knowing that Batman’s weakness is his ardent sense of justice, the Joker pushes the Dark Knight to challenge his own beliefs. The Dark Knight seems like an “immovable object,” but seeing that he was willing to risk the lives of the partygoers at the Wayne fundraiser to save Rachel, it becomes clear to the Joker that Batman cares about something other than justice. In an attempt to corrupt the Dark Knight, the Joker gives Batman a choice between the two things he holds most dearly: Rachel, a symbol of lust, and Harvey Dent, a symbol of justice for the people. While being interrogated, the Joker says to the Dark Knight, “Then that’s the rule you’ll have to break to know the truth. The only sensible way to live in this world is without rules, and tonight you’re going to break your one rule.” Ironically, the Joker is in a cage: he has no control, but nor does Batman. For once in his crime-stopping career, Batman loses his grip on the world. This explains why he goes to the extent he does to infringe upon the law. The Joker’s job is made easier by the fact that he can tear people apart internally, even in the position of a prisoner. The Joker lies about the locations of each hostage, in turn internally tearing the Dark Knight to pieces. Batman intends to go after Rachel, but finds Harvey in the warehouse at which he arrives. Batman’s intentions show viewers that even the most consistent sense of justice is corruptible. Not only did the Joker pervert the authoritarian justice that Batman stood for, but, like a double-edged sword, he also corrupted “Gotham’s White Knight.”

When we think that all has come to a close and justice has been served, the Joker reminds us, viewers, of the loose cannon that he has set upon society, Two-Face Harvey. Dent is the one man Batman can’t control. If society were to learn that the man serving as Gotham’s district attorney had been stepping outside the law, to serve justice as he saw fit, order would crumble. Paradoxically, Batman seems to already fit this role, enforcing justice the way he sees fit. Just as Batman breaks laws to bring society under his control, Two-Face Harvey kills in order to bring the world to its knees. Until the end, it seems as if the only thing separating Batman and Dent is the fact that Batman won’t kill. Ultimately we are proven wrong when the Dark Knight assumes his role, hurling Dent off the edge of a building. The Dark Knight takes Harvey Dent’s life to reaffirm the sense of justice that the Joker took from him. In Gotham there can only be one fascist that decides how to interpret justice. Corrupted by the Joker, Harvey Dent threatened that establishment.

Nolan’s film depicts a struggle between fascism and anarchism, a battle of polar opposites, where justice is not absolute. Even the things we take for granted are corruptible. The title, The Dark Knight, is implicit of a struggle more than just that of good versus evil, as most viewers see it. A society, heavily monitored and maintained by one individual, is challenged by a nihilist, who attempts to break away the most fundamental facets of what makes the public human. The Dark Knight is in no sense clear-cut. Justice has shadings, and those shadings are determined by those individuals who hold the most influence over society. The conflict of the film is Batman’s attempt to hold onto his twisted sense of justice, even in the face of a villain who tries to show that justice is obsolete.