What makes a work of art “great” or “classic”? Can there be modern classics? And how is that decided? While looking for a response to these questions, I searched for “modern classic movies” in Google. The third result was an article on the Business Insider website which listed the 2008 Disney/Pixar film, WALL-E, as a “modern classic” because it “explores so many different issues that you can watch it a dozen times and enjoy focusing on each one.” (Guerrasio) According to this article a classic is re-watchable and able to be returned to with a new focus. The word, “classic,” often implies antiquity, especially because of its use with reference to Greek and Roman culture, but the other aspects of its definition and connotation do not require that a classic be from a distant past. In the claim: “It is important to study great works of art, and especially great works of literature, because they give you a head start on the path of human perfection. They help make you fit for a humane existence, help you plan out a life worth living,” a “great” work of art is valued as being able to effectively present ideology of living a “good” life or a “life worth living.” Using this criteria, WALL-E still fits. It first presents the potential negative consequences of not resolving social issues before arriving at an imagined solution which promotes ideals. WALL-E is a great work of cultural art because of its positive message in response to multiple social issues. 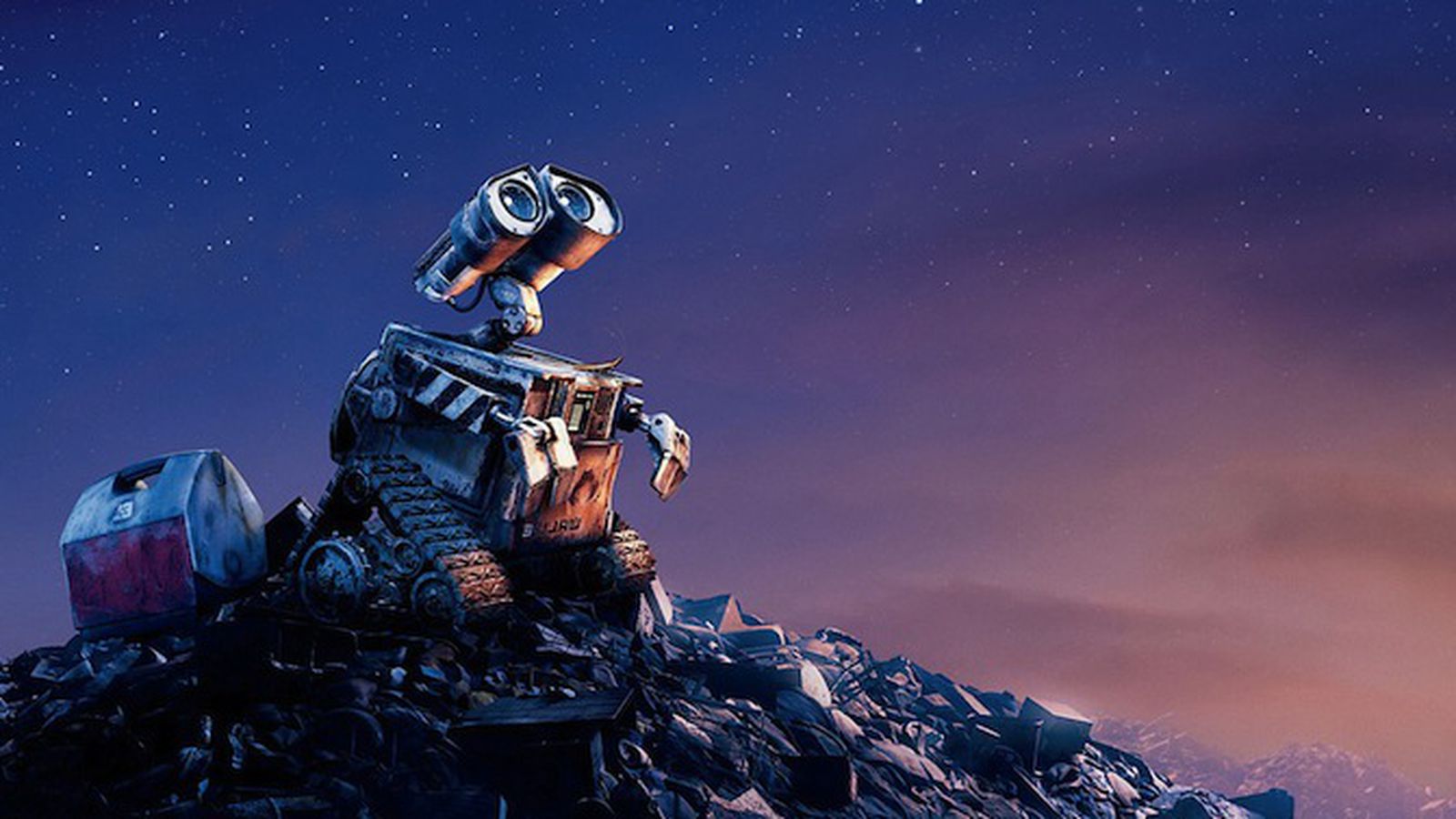 WALL-E brings to light the issues of climate change, obesity, and attachment to technology. It also critiques big business and ignorance before arriving at a semi-happy ending when the people work to resolve the issues. The issue of climate change is the most obvious. The film takes place in a post-apocalyptic future where humans have lived on a giant, highly technological spaceship, the Axiom, for over 700 years because the waste and pollution on Earth made it unable to sustain life. Once any sign of plant life is found on Earth, the humans are supposed to return to restore and re-inhabit the planet. The name, WALL-E is an acronym that stands for “Waste Allocation Load Lifter – Earth-Class.” WALL-E appears to be the only functional robot of his kind left on Earth. He lives all alone with his cockroach friend in the run-down, complete landfill that is now Earth. He collects the trash, forms it into cubes, and builds towers out of it. Sometimes he finds objects that interest him and he takes it home where he organizes them. One day, he finds a little plant and saves it. Then another robot, named EVE (another acronym, which stands for Extraterrestrial Vegetation Evaluator), arrives to search for plant life. After meeting WALL-E and finding the plant, she returns to the Axiom in hibernation mode with WALL-E following her. On the Axiom, we meet the humans, who are constantly lounging in hover chairs with video screens in front of their faces to chat with each other and watch advertisements about food and drink on the ship. Robots run the ship while the humans relax like they are always on vacation. They are all obese because they barely even have to move. They are also so focused on their screens that they do not notice anything else around them. The Axiom is operated by Buy N Large, the corporation whose logo is the only one that appears – both on Earth and on the spaceship. When the former leader, who sent the humans to space, is shown, we see that he was not the President, but the CEO of Buy N Large. The movie seems to blame all big businesses for ruining the Earth and causing all of the other issues. The movie suggests that this (a waste-filled, barren Earth with humans living in outer space as little more than blobs) is what could happen if we do not resolve these issues now.

After critiquing and presenting the issues, the movie then provides solutions for them and arrives at a semi-happy ending. Shortly after the Axiom left, it was thought that Earth would forever be uninhabitable so the CEO sent a message to the Axiom that they should never return to Earth. However, this movie shows that there is still hope to reverse the pollution on Earth, even after it has been completely overcome by garbage. Therefore it is also possible to change now so that Earth does not get to that point. In addition, WALL-E and EVE take care of the one little plant and treat it as precious and valuable as they protect it from the auto-pilot robots who want to destroy it and force the humans to stay in space instead of returning home to Earth to recolonize. This shows how we should treat plants, even now, because they are necessary for our survival on Earth. At the end of the movie (after the captain changes the “Auto” robot to manual), the humans return to Earth and begin to farm to begin to reverse the damage done by all the pollution and waste. This ending is only semi-happy because there is still much work to be done; it is only the beginning of more struggles as they try to rebuild the Earth and start over. Because the captain turns off the autopilot of the head robot, he shuts down the former big business leader and gains control. The movie presents the ideology that in order to restore the planet, big business leaders have to realize that there is still hope for the planet and treat plants the way WALL-E and EVE do by taking care of them instead of destroying them.

An interesting part of the movie is that WALL-E and EVE act like humans more than the humans do. WALL-E watches black and white movies on a TV in his home and wants to fall in love and hold hands with someone. He acts like he has a crush on EVE when he meets her and eventually they seem to fall in love. They are the only robots who make decisions on their own and show human emotions. In fact, they also teach the humans how to take charge, stand up (both metaphorically and literally) for the planet, and care for one another. The fact that humans learn from robots also presents hope because technology will not necessarily ruin the planet.

The movie also suggests that we should be aware of our surroundings and appreciate nature instead of being so attached to technology. WALL-E accidentally knocks a man off of his chair and introduces himself as he helps the man back up. With the video screen no longer in front of him, the man finally looks around and says “I didn’t know we had a swimming pool.” Later, WALL-E interrupts a woman’s video chat because he wants to move closer to EVE and she was in the way. Again, without the screen in front of her, she notices that they have a swimming pool. The man and the woman meet and later they observe in awe as WALL-E and EVE fly around outside the spaceship. They appreciate the beautiful stars and scenery that they only notice now that they are not constantly watching a screen. They also leave their chairs voluntarily and exercise a little bit as they have fun swimming in the swimming pool and they disregard a robot that tells them it is time to leave. The movie encourages physical activity and agency both in this scene and when the captain finally has to stand up and walk to turn off Auto. The captain takes charge of the technology and tells Auto “I don’t want to survive, I want to live.” Even though humans are surviving on the Axiom, they are not living because they are not being active or taking agency. The ideology presented in this movie makes this movie a great work of art because it is positive and teaches how to live a life worth living.

Several cultural critics would disagree that WALL-E could be considered “great.” Matthew Arnold, whose argument is paraphrased in the claim quoted above, implies in his writing that his definition of a great work of art would almost exclusively include art created before the Industrial Revolution. F. R. Leavis, who would also agree with the above quoted claim, draws a distinction between popular media intended for mass consumption and great works of literature and art that makes the two mutually exclusive. Theodor W. Adorno and Max Horkheimer introduced the term, “the culture industry,” to criticize the mass production and standardization of cultural media and the arts because it turned art into a product to be marketed and sold and it caused all the works to be very similar to each other. Louis Althusser, who also critiques the capitalization of the arts, argues that popular media is used by the ruling class to indoctrinate the proletariat with ideology that maintains them as subservient workers. All these men agree, although for different reasons, that cultural works which are the products of the entertainment business are damaging to society because they are not produced freely. They would all likely contest the above assertion that WALL-E, a children’s movie created by one of the largest and most influential media companies, could be likened to a classic work of art because of its positive messages. But it fits Arnold’s and Leavis’ criteria for a great work of art even though it is a product of the culture industry and it was made for both entertainment and ideology.

I disagree with Althusser’s cynical view and I believe the ideology in this movie is intended to teach values and ideals to children because the producers actually believe in their ability to change the world for the better – not because they want to prepare future workers. Leavis’ point that we should be able to tell the difference between a work of art which can teach ideals and one that represents what we should not follow is applicable even to products of the culture industry. WALL-E’s ideology is what makes it valuable and worth watching despite its production. Even some mass-produced works of art can be great in the way that Arnold and Leavis argue.