In 2003, a group of college dropouts were about to make the best decision of their lives. These friends had been making articles and videos about video games on the internet for a couple of years, but when an old video of theirs was going to be featured in Computer Gaming World, a popular PC gaming magazine, they decided on a whim to use the publicity to launch a new video series (Rigney). That series would go on to be the longest running web series on the internet, winning many awards. 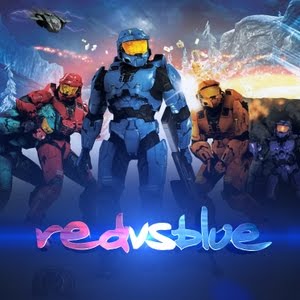 Still running today with 258 episodes and 14 seasons, Red vs Blue spawned one of the most successful internet entertainment companies of the past decade, Rooster Teeth. Around this company is a large fandom with fans that aren’t just passively consuming the content. The unique internet culture fostered by companies such as Rooster Teeth offer many opportunities for their fans to be creative in their own right. 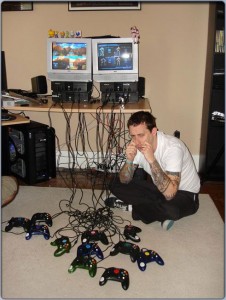 Rooster Teeth’s setup to make an episode of RVB from 2004. Each controller is a different camera/actor.

Red vs Blue is a machinima, a film that uses video games as a medium for its production. All the sets, characters, and action are filmed inside of a video game (Lowood). When the founders of Rooster Teeth made Red vs Blue, they had no idea there was even a term for what they were doing. Though the art form predates Red vs Blue by a few years, it is by far the most popular machinima to date. It was the first machinima that many people ever saw, including the current CEO of Machinima.com, a popular machinima hosting website (Rigney). 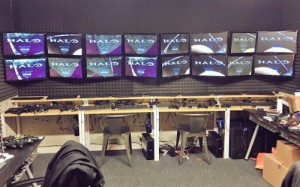 Rooster Teeth’s current setup to make an episode of RvB.

The creation of machinima itself is a great example of how fans can be creative with the media they love. Rooster Teeth has gone on to produce live action shorts, web comics, game shows, news shows, animated series, documentaries, podcasts, and most importantly let’s plays

Let’s plays are recorded videos of a game being played as the player provides commentary on their actions (Fjællingsdal). This phenomena has grown in popularity in the past decade thanks to video streaming sites such as YouTube. Rooster Teeth entered this market with their Achievement Hunter division. By this point, Rooster Teeth had grown to such an extent that it was comprised of many different divisions, one such division was Achievement Hunter. This was a group that produced videos that showed how to attain certain achievements, challenges that can be completed in a game for a point value, for new and upcoming games. They then ventured into entertainment let’s plays with their aptly named Let’s Play label. This started with just Achievement Hunter, but has since grown to include many subsidiaries of Rooster Teeth including Funhaus, Screw Attack, Kinda Funny, and the Creatures. Rooster Teeth continues to be popular, with videos hosted on their own site as well as YouTube. As of 2016, the Rooster Teeth YouTube channel has 8.5 million subscribers, and the Let’s Play Channel has 3.5 million subscribers.

Though they became a viral phenomenon in their first year as a company, they did not see monetary success for some time. In fact, hosting a website where people could download that week’s latest episode was costing them more than they ever anticipated. This prompted them to offer sponsor packages. For a small yearly fee, fans could become a sponsor which allowed them to view videos early (Rigney). This eventually grew into their community website. Similar to Facebook, fans could have a profile where they could post pictures, have blog posts, and form groups with other members. Rooster Teeth staff all had profiles and would often join in discussion with fans.

The Rooster Teeth website predates YouTube by a couple years, but they started using YouTube early on as a second location to host videos. YouTube has fostered a participatory culture where members can contribute in a number of ways. Members can view videos, which adds to its view count. This seems like just a number, but it determines how much ad revenue a channel receives, making it very important. Members can also post videos of their own and comment to have discussions about the video in question. This creates a community between the members. Through the medium of YouTube, “members build a connection with the community and the media content creator when providing feedback through comments and video responses” (Chau).  Through these connections, media consumption becomes more of a discussion than just a one way relationship. Viewers are able to share their ideas with the content creators and it’s not uncommon that they are actually listened to.

Rooster Teeth takes these discussions to another level with their live podcasts. In these podcasts, a rotating cast of Rooster Teeth staff have candid conversations with each other about their jobs and their everyday lives. 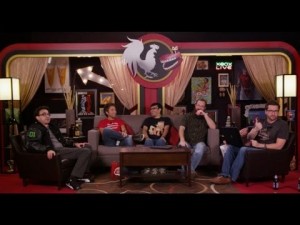 Because they are streamed live, fans are able to use Twitter to send messages that will be seen by the podcast members. Many of these messages are replied to during the live broadcast, creating a direct discussion between the fans and the creators. Fans often produce images based off of stories or jokes that are said on the podcast. They are then able to tweet these images to Rooster Teeth, where they can be featured on that very same podcast. In this way, creative fans can affect the media they are consuming as they consume it.

In addition, fans are constantly sending original artwork to Rooster Teeth. This might include paintings, sculptures, knitted apparel, written works, and even swords. Any notable submissions may be featured on a video or a podcast. The relationship Rooster Teeth has with its fans is much more intimate than those of TV shows or movies. They have candid conversations with their fans through blog posts on the community sites, comment threads on YouTube, and their live podcasts. This gives fans direct access to the people behind Rooster Teeth, making them feel as if they know the Rooster Teeth staff and are friends with them. This is why many fans send in gifts, because they genuinely like the people they are giving gifts to. It helps that any artwork sent in has a chance of being featured by the staff themselves; this encourages creativity in order for your work to be shown on the media you love.

Let’s plays are creative works. Few successful let’s play channels are silent and only show off the game, viewers are drawn to amusing commentary or activities done by the players in the game. 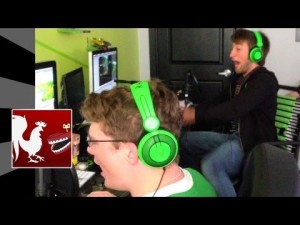 Successful let’s play channels add their own personality and creativity into their videos (Fjællingsdal). Furthermore, in order to make a let’s play, you need to enjoy video games. That seems very obvious but it’s important. The audience of a let’s play and the creator tend to share a love for video games. This is why, “Let’s Plays meet the definition for interest-oriented communities; they consist of groups of people sharing the same passion or interest for games…” (Fjællingsdal). Because of this, the audience members are able to see themselves in the content creators they are watching.

When fans see Rooster Teeth, they see geeky fans who love playing with video games. They feel as if they’re not much different from the people they idolize. This entices them to make their own videos and become creators themselves. But they don’t need to go that far to flex their creative muscles; they can assist in the creation of the let’s plays by suggesting games or activities that can be the subject of a new let’s play. Like I said earlier, let’s plays are creative work but that doesn’t mean all the creativity has come from the creator. If fans have an idea that they think would make for a good let’s play, they can pitch the idea in the form of a comment on a video or a tweet. On top of that, in certain games where players can make their own maps, or levels, fans can even make the set on which a let’s play can be filmed. Rooster Teeth will often take these suggestions and will credit fans who come up with good ideas at the start of those videos. This connection with the community allows for the fans to be a part of the creative process, and so allows the fans to be creative themselves.

Due to their success, Rooster Teeth has been able to work on ambitious projects, such as their own video game and their own feature length movie. These are both things that require a lot of resources, but the core of Rooster Teeth, the let’s plays and machinima, only require a video game and creativity. Fans can set out to mimic the products they love by making their own let’s plays and their own machinima. The unique nature of the content Rooster Teeth produces allows anyone to try and copy the content they love with the same quality that they enjoy. Rooster Teeth actually offers a platform on which community members can post their own videos. Fans can create achievement guides and let’s plays for the rest of the community to watch. Each week, Achievement Hunter has a weekly update video. Towards the end of each week’s video, they highlight a community video of the week, congratulating and giving publicity to the creator of that video.

The online entertainment industry is full of successful young people who became sensations overnight.  Rooster Teeth itself was conceived by a few guys in their twenties. In fact, “seven of the ten most subscribed [YouTube] partners are teens and young adults ranging between ages fifteen and twenty-four…” (Chau). This tells fans that they themselves could be successful in this industry. It doesn’t require a lot of experience or connections, all it takes is a fan with a video game and creativity.

Rooster Teeth is well aware of the creativity of its fans. In an interview with the online website Indewire in 2014, Burnie Burns, a founder of Rooster Teeth, estimated that a third of their staff had their start in the fan community (Konow). They frequently ask the fans for artwork, suggestions, and names for their products. In the Rooster Teeth store, you can find countless designs that started as a fan submission. The current creative director of the company, Gavin Free, started as a fan over 13 years ago. As a young teen in Great Britain, Gavin loved their content and was an active member of the community for years. Now he lives in Austin, Texas, where Rooster Teeth’s offices are located, and plays a big role in many of the company’s productions.

The fans of Rooster Teeth receive many opportunities to be creative and contribute to the media they love. This is only possible due to the staggering amount of communication between the fans and the creators. There doesn’t seem to be as big of divide between the two as there are between Hollywood stars and their fans. This unique relationship owes itself to the internet and the culture it has created. I predict we’ll see more media take this form in the coming years, with more collaboration between content producers and consumers.