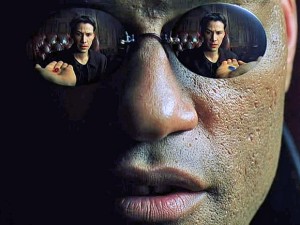 When the word “dystopia” is thrown around during a debate, most people’s minds jump to thoughts of 1984, The Hunger Games, or The Matrix. Normally, the visionaries, who portray such societies, pit a revolutionary protagonist against a seemingly indefatigable, fascist system. There is always this sense of absolutism that equates dystopia with totalitarian repression. Such is the message, that cultural pieces, like the ones mentioned above, seem to show us. In The Matrix, yes, there is clearly a struggle on the part of the “enlightened, real-world minority group” to overcome the prescriptive, coaxing, materialistic world of the matrix, controlled by the agents. It’s the modern reinvention of David and Goliath, where a charismatic, weaker force overcomes a dominant one. This, however, would only be a simplistic, with-the-grain reading of the film. Let us not overlook the fact that Morpheus’s crew, namely Neo, only overcomes the antagonist, Smith, so that he might replace him as the alpha in the matrix. My point being, the matrix actually has some redeeming intrinsic values. The matrix may support a dystopia of sorts, but it has utopian qualities. Even those individuals, who have been brought out of the matrix to the real world, appreciate the seductive possibilities when jacked-in. The matrix offers entertainment and culture, which, even, regretfully, in the eyes of the protagonists, holds promise of a better life. Ernst Bloch, the renowned Marxist academic, maintains a similar line of though, “seeing utopian potential in cultural artifacts ranging from advertising and display to Beethoven and opera” (Kellner 5). Though very anti-Adornian, Bloch seems to uphold that, what one may see as, “controlling” aspects of the culture industry might actually offer utopian qualities.

Much like critics before me, we can settle on the fact that the world of the matrix is fundamentally dystopian. People within society follow through with their lives under the assumptions that consumerism puts before them. They work, they buy, they work more…the cycle continues. This is the way in which Lilly and Lana Wachowski, the film’s directors, lead us to believe life in the matrix persists. Essentially the agents, the human-like subjects of the machines that control the matrix, act as the Big Brother authority figures that, ever so inconspicuously (to the everyday citizen’s eye), manage everyone’s lives. One might subsequently pair a conception of rigid control with dystopia. Jill Dolan, English department chair at Princeton, professes, however, that, “Fascism and utopia can skirt dangerously close to each other” (2). By this token, one might find parallel qualities in both dystopian and utopian societies. Hence my claim, though The Matrix depicts a dystopian society, it has shadings that give it utopian qualities. 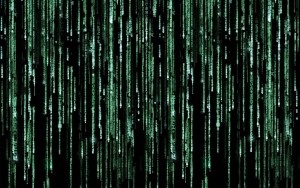 Cypher, a proven villain of the film, finds resolve in the world of the matrix. It is important to note that Cypher, like many other characters of the film, is a human, brought from the world of the matrix to reality. Having experienced both worlds, Cypher cuts a deal with Agent Smith to live a better life, within the matrix, as a famous actor. Fully aware of the “dystopian” consequences to which he is sentencing himself, Cypher voluntarily seeks out Smith. A critic might choose to ignore such a plot detail, or merely dismiss it as the action of a thoroughly materialistic antagonist. Cypher, however, is not the only one coaxed by the promise of the matrix—I will discuss that later. The intent of the rebel group, who lives in reality, is to enlighten people and pit them against the matrix. Once they are brought over, the assumption is that they will see the poison that seeps ever so quietly into the minds of those that live within the matrix. Having seen both worlds, Cypher decides to go back. Logically speaking, only an utter fool would choose something truly dystopian over something as liberating as reality. Cypher, however, through his systematic destruction of Morpheus’s crew, proves he is no fool. Why then, would he choose to go back? The matrix has certain utopian qualities that offer something reality cannot: limitless possibility.

Neo, our protagonist, only has the ability to be a kung-fu master, a parkour legend, a weapons expert, and a bullet dodging superhuman when he is jacked-into the matrix. Similar abilities go for other characters in the film, like Morpheus and Trinity (disregarding the last, god-like ability to dodge bullets). When cops come after Neo and Trinity, police prove no match for the martial arts masters. Furthermore, in the conclusion of the film, where the all-powerful agents are obliterated, Neo exercises divine powers. His abilities are only possible when he has entered into the matrix. In the real world he is a weak, unconfident, pasty man. Contrastingly, when in the matrix, Neo is, as we see in the film, nearly invincible. The matrix may in fact be dystopian, but such abilities and changes in character present viewers with a problem: the matrix is almost too good to be true. When Neo jacks-in, he’s hooked. What he can do in the matrix makes him worth something to the crew, and it gives him character. Douglas Kellner puts it quite well, in that, “many people wear masks…to get a new and more satisfying identity through immersion”(5). One can’t deny that Neo, along with Trinity, appreciates the matrix more because of what he can do in it. It makes grey, listless people great. Everyone, who enters the matrix from reality, becomes super-human. Given, these abilities they are granted are materialistic, but they shape the development of the film’s characters so much that they seem to scream utopia. What in fact gives us our identities is a combination of what we do and how we reflect on what we do. 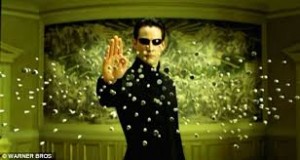 Not only does the matrix give one superhuman abilities, but also one can have most any skill uploaded to their mind. Nearing the end of the film, Trinity desperately needs to know how to fly a helicopter in order to save the day. Within seconds a file is uploaded to her animus and she is a professional pilot. Similar things happen throughout the film, from learning advanced martial arts to speaking several languages. Essentially anything that our protagonist and his crew need can easily be provided. This aspect of the matrix is borderline comedic. When a problem arises, a solution is almost always within reach. Oddly enough, in such a cruel, repressive world as that of the matrix, one can find effortless perfection. This persistent deus ex machina aspect of the film sheds light on the utopian characteristics present.

Let us also not forget that the romantic relationship between Trinity and Neo was sparked in the matrix. The eroticized excesses of tight leather clothing, slicked back hair, and promiscuous shades that Morpheus’s crew bear far outweigh the grey, tattered, sub-thrift rags that the crew wears in reality. They could wear whatever they wanted, but they choose to wear sexy, tight clothing. Even though they have all left their former lives in the matrix for a promise of something better, it is evident that they still appreciate the clothing they wear in the matrix. Though speculative, one might add that Trinity’s seductive outfit played a large part into why Neo even listened to her in the first place. Jill Dolan goes as far as describing aspects of utopian unity as “clinging to the fleshy seductions of old-fashioned primal emotion and presence” (3). Clothing enhances physical attraction and image. The tight leather garb Trinity wears simulates her wearing no clothing whatsoever. By this token, the matrix offers solutions to primal urges. The clothing Neo and Trinity wear in the matrix plays very much into their relationship, affecting their sense of character. Neo goes from being a low-life computer hacker to being a decked-out badass. Such sexually amplifying materialism makes even those that have been enlightened (the crew) more intimidating and cohesive. If the “pure” specifically appreciate what they wear, there must be a certain degree of utopian qualities to clothing. In no doubt is flashy clothing consumer culture. Obviously, however, it has benefits in the eyes of those, who ought to know better. 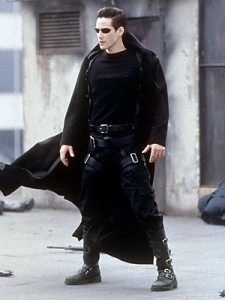 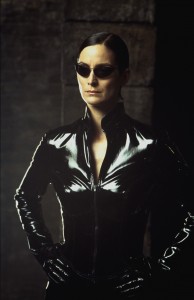 If you want to become “aware” and leave the matrix, essentially you have to trip on drugs. Morpheus offers Neo a choice, roofies or DMT, a blue pill or a red pill. The blue will make him forget and the red will make him essentially experience the most vivid trip anyone has ever had, thus “awakening” him. It’s kind of ironic that one can leave the matrix, a dystopia, by taking a drug. One might suppose that Morpheus’s choice of narcotics as a solution to a system of oppression isn’t quite so favorable. It makes one question whether “finding reality” through vices is really all that genuine. Within the matrix, at least, you’re not about to be drugged by some cult-leader who claims he has answers. I digress. 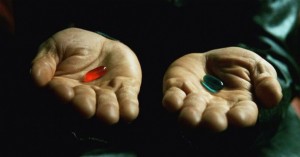 The dystopian nature of society in the matrix must not be seen as an absolute. The matrix has several utopian qualities that provide our group of protagonists with various popular cultural choices. As it seems, even though our group of protagonists have made it their goal to undermine the power of the matrix and its subsidiary agents, they cannot seem to evade the luring utopian qualities that permeate from the lines of code. Neo, among others, enjoys the feeling of invincibility. Cypher recognizes that the matrix is full of culture and vibrancy that gives one a sense of identity. In the visceral minds of each crew-member, there exists this burning desire to advance beyond a reality of grey, cold, faceless monotony. For this exact reason, even those that have seen beyond the matrix choose to live the better part of their lives in the matrix, where power is transcendent. Unbridled potential lies in the dystopia critics call The Matrix. Why would the forces so deeply pitted against a dystopian regime be so coaxed by its influence? What appears to be a dystopia, in the absolutist sense of the term, actually has various shadings of utopian qualities. Such can be seen in all that our utopian-oriented protagonists, Neo, Trinity, Morpheus, etc, strive towards.