Women truly come in all different shapes and sizes, and consequently feminism should as well. This is why when mainstream feminism failed to include women of all sizes, there were women who came to fill in the gap through activism with groups like the Fat Underground. 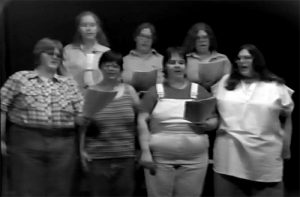 The Fat Underground was an organization that acted as a catalyst in the creation and mobilization of the Fat Liberation movement. Based in LA in the 1970s, the Fat Underground did not fight to change discriminatory laws but rather discriminatory thoughts and practices in different aspects of society. These discriminatory practices included those of doctors and other health professionals who perpetuated the unhealthy habits encouraged by diet culture. This approach to reform the health profession stems from the Fat Underground’s roots in the Radical Therapy movement, which sought to reform the mental health profession. According to the rhetoric of the Radical Therapy movement, people with mental illness were not to host the burden of changing themselves. We are instead supposed to change the stigma surrounding mental health. This “change society, not ourselves” ideology was the foundation for much of the activism in the Fat Liberation movement.

aggressive, they ultimately came to adopt much of the Fat Underground’s logic in their respective fields.

In November 1973, Judy Freespirit and Aldebran published the “Fat Liberation Manifesto” on behalf of the Fat Underground. A manifesto is a written statement declaring publicly the intentions and views of who issued it. In this case, the manifesto outlines the ambitions and views of the Fat Underground, who takes the liberty of speaking on behalf of all fat people. Judy Freespirit and Aldebaran, pioneering members of the Fat Underground, designed these seven points to solidify the desires of the Fat Liberation movement and ended with a call to action. The manifesto first establishes that fat people are entitled to what they were denied on a daily basis: “human respect and recognition.” The other objectives then outline the commercial exploitation of fat bodies by both corporations and scientific institutions. This manifesto marked a key point in the Fat Liberation movement because it is one of the first times there was a public call for unification of fat women and fat people under one common purpose. The rhetoric dictated in this manifesto set the tone for the movement.