An Imagined Solution to a Real Problem: Political Correctness and South Park

UncategorizedOctober 16, 2016Comments Off on An Imagined Solution to a Real Problem: Political Correctness and South Park

Trey Parker and Matt Stone have something important to say – something that might be somewhat difficult and uncomfortable to come to terms with. Something that throws a wrench into a certain line of thought that claims to devote itself to the fair treatment and well-being of all people. That is to say, a movement that might be called “Political Correctness,” or “PC,” has the ability to be morphed from a well-intended attempt at inclusivity into something with sinister undertones. In the minds of Parker and Stone, PC commodifies and hurts the very people it aims to help and deprives those who partake in it of autonomy and free thought.

This point reveals itself in the 19th season of the animated series, South Park, in the way that the show makes vivid a real social crises and then proposes an imagined (and flawed) solution to that crisis. Season 19 tells of South Park’s attempt to reshape its image from a vulgar and intolerant town to one that is inclusive and, in the show’s own words, PC.

Perhaps the show presents Political Correctness as the solution to the issue of social injustice. PC Principal is ushered in as the new principal of South Park Elementary to reform it into a more tolerant school after someone made a rape joke (the show would later reveal that it was Mackie, the counselor, who made the joke). Kyle, one of the central characters, is excited for these changes, saying he looks forward to South Park becoming a place “where people can begin to have a dialogue.” While Political Correctness is displayed as having its faults – its most ardent followers are college-aged white males who live in a fraternity house together and are prone to prioritize women and alcohol over social justice – these faults are mostly worked through by the end of the season, and South Park is a happy town that embraces PC ideals.

The idea that PC is the imagined solution to the real problem of social injustice, however, is a red herring. If one looks deeper, PC culture itself is presented as the real social crisis in need of a solution. It all starts with the demographic of those partaking in PC culture. It is very curious that none of the people partaking in this PC culture are a part of any of the marginalized groups that they claim to defend. This leads to an interesting issue when PC Principal tries to indoctrinate Jimmy, a physically handicapped student, in the ways of Political Correctness. This is problematic, since there is no way PC Principal knows more about being handicapped than Jimmy does, having not actually had this experience himself. It becomes evident through this exchange that PC Principal cares more about his own smug sense of satisfaction that he gets from pointing others’ transgressions out to them than he cares about actually achieving positive social change. The relationship between PC and marginalized groups then, is not that of a protector and the protected, like it might seem to be at first glance, but something else. 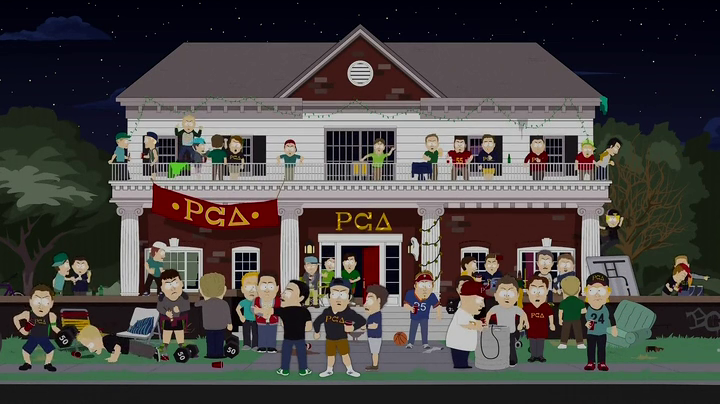 The PC frat house  during a party. All the members are straight white males (Source: southpark.wikia.com/wiki/PC_Delta)

But what, then, is the relationship between PC culture and those it claims to defend? Parker and Stone use several instances throughout the season to suggest that this relationship that of a consumer to a product. Take for example the episode “The City Part of Town,” in which the people of South Park try to get a Whole Foods (which is used here as a symbol of PC culture and of gentrification). The grocery chain sends a representative who asks to visit a classroom. In the classroom, a handicapped child and an African-American child – who is by no coincidence named Token – are conspicuously displayed in the middle of the front row. If one pays attention to other depictions of the class without the Whole Foods representative, one sees that this is not the normal seating arrangement. So we have two people who are part of the marginalized groups that PC culture claims to defend being used as commodities or bargaining chips to push PC’s own agenda to get a Whole Foods, an agenda which is harmful to one marginalized group – the poor – in particular, for reasons that will be discussed later.

This consumer/product relationship is further fleshed out in the episode “Tweek x Craig.” When rumors start of a gay relationship between Tweek and Craig start, the entire town wants to show its support. The way that the people of South Park do this is by giving the two supposed lovers money. When the two face disciplinary trouble for fighting, PC Principal refuses to punish them because they are gay, and instead sends them home with $100 each. This puts a price tag on the identities of Tweek and Craig, showing how those who are PC act as consumers and commodify marginalized groups. Viewed this way, PC culture is more about the fulfillment of the egos of those who practice it than it is about social change, since giving money to gay couples does little more than make the donors feel good about themselves.

Another way that PC is depicted as a social crisis is that it brings with it gentrification. Early in the season, the run-down part of South Park is renovated as a revitalized arts and foods district called Sodosopa (this includes the aforementioned Whole Foods). This district is built up around Kenny’s old, derelict house, which is left standing with Kenny and his family still living in it. This is an example of further commodification by PC culture of those it claims to defend, since Kenny’s house is advertised as a novelty, a remnant of the past – to bring more consumers to Sodosopa. Any contentment that Kenny and his family had with their small, private home was lost as they were forcefully thrust into the heart of the busiest part of town as something not unlike a carnival attraction. Kenny represents one of the groups that PC culture claims to defend: the poor. In the case of Kenny, the wants and needs of the poor are ignored in favor of PC’s own selfish wants.

Related to gentrification is perhaps the most significant way in which PC is a social crisis: it leads to a loss of autonomy and free thought. While hints of this phenomenon are evident throughout the season – PC Principal turns to physical violence to repress people who say politically incorrect things more often than he has a dialogue with them – its most notable instance is in the development of a conflict between PC culture and sentient advertisements. These advertisements look and talk like people, and ultimately have an agenda to gentrify the human race to extinction by making necessities too expensive to afford.

Before looking into what this conflict means, it is important to realize the function of advertisements in our day-to-day lives. The job of advertisers is to make you, the consumer, buy their product. Through methods like catchy jingles or marketing to impressionable young children, advertisements deprive consumers of autonomy.  More often than not, the products you decide to buy are based more on the quality of the ads you’ve seen than the quality of the product itself.

So it should say a lot about what Parker and Stone think of PC when the ads manage to push their agenda on the back of PC culture by taking advantage of the fact that the two are nearly indistinguishable. One character, Nathan, explicitly states the similarities between ads and PC: “what is PC but verbal form of gentrification? You spruce everything up, get rid of the ugly in order to create a false sense of paradise. Only one thing could live in that world — ads.”  Ads and PC function in the same way and have the same agenda: they both deprive people of autonomy and seek to do away with the ugly and leave the pretty.

So Parker and Stone depict Political Correctness as a social crisis. What, then, is the imagined solution to this crisis? The solution starts with Mr. Garrison, a proxy for Donald Trump. Garrison gets angry at the influx of illegal immigrants from Canada in South Park early in the season, and he kicks off a political campaign based on the idea that the illegal immigrants should be “rounded up and f*cked to death.” 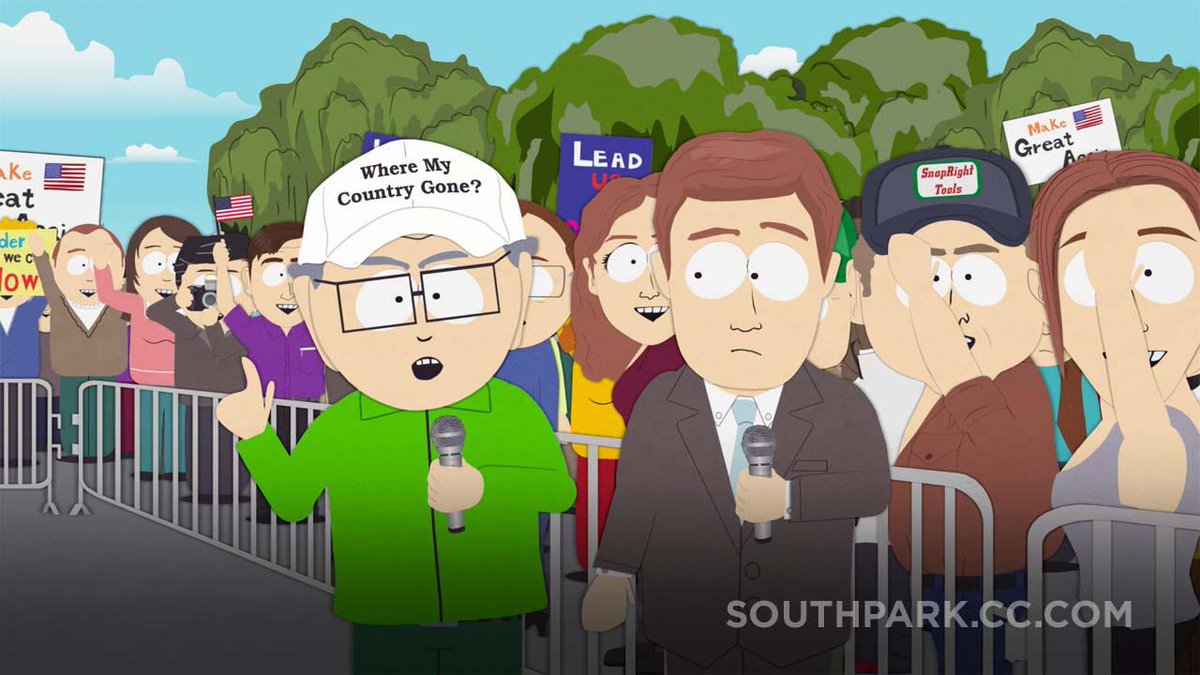 It might be tempting to call Mr. Garrison anti-PC, but this is not quite the case. When one considers that his running mate is Caitlyn Jenner, whom the Politically Correct consider to be “stunning and brave,” the question of why Parker and Stone made the decision to pair these two arises.

The answer to this question lies in the show’s depiction of Jenner. The viewer is not allowed to forget about the time she committed a hit and run – she runs a person over (and presumably kills them) with a car in every episode that she appears in. This shows that despite being the object of PC culture’s affection, she is still a bad person. Furthermore, there exists for Garrison and Jenner a physical removal from PC culture, since the two leave South Park to campaign for most of the season, helping to put them outside the sphere of PC culture altogether. 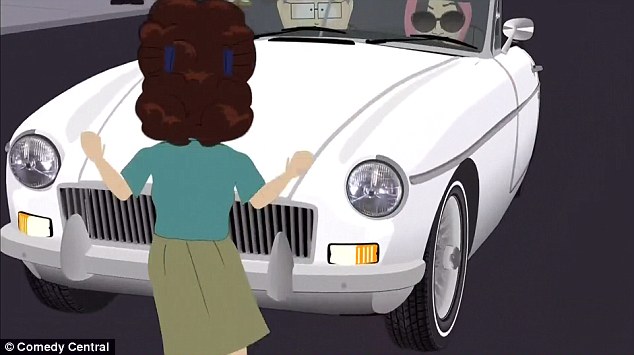 Caitlyn Jenner hits a pedestrian every time she takes the wheel in season 19 (source: dailymail.co.uk)

When Garrison and Jenner return near the end of the season to help fight the advertisements, the two take on the role of protagonists, by virtue of the fact that they help to save the human race from extinction. In the very end of the season, Jenner and Garrison team up with those who are PC, and all the people of South Park decide to shun gentrification and pursue a continuing fight against the ads emphasizing human unity.

Parker and Stone are caught in a moment of fantasy here. They made the viewer cheer for a rapist and murderer, then implied that the solution to PC culture’s flaws is to be inclusive of them. This solution is problematic: The fact that no action was taken against Garrison and Jenner, both of whom committed murders, is disappointing. The implication is that criminals should be allowed amnesty without any consideration – that everybody deserves inclusion. Furthermore, recalling that Garrison is a proxy for Donald Trump, this might be seen as an implicit endorsement of Trump (recall that season 19 was created during the primaries). This is an noteworthy if for no other reason than that South Park is often seen as dismantling ideology rather than displaying it.

Despite Parker and Stone’s unsatisfying solution to the problem of PC culture, there is a hint of a better solution that exists in the South Park school newspaper, for which Jimmy is the editor. Jimmy refuses any sponsored content (i.e. ads), and the paper seems to be a place of legitimate discourse, providing a place for the dialogue that PC culture promotes but does not provide. There is little censorship, which runs contrary to the deprivation of autonomy by PC culture. The South Park school newspaper is a much better alternative to PC than that proposed by Parker and Stone. Perhaps the real answer to PC culture lies in having a no-holds-barred civil discord about the very real social problems that are faced by groups of people.