The New Way Forward in the Middle West 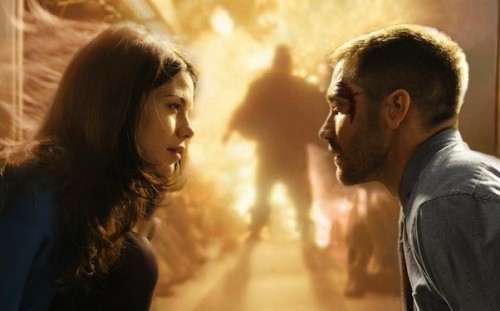 A few quick observations about Zowie Bowie’s Source Code, from earlier this year.

But first, the plot: A terrorist has just blown up a commuter train on the outskirts of Chicago, killing hundreds, and is headed downtown to hit Play on a dirty bomb, which will kill thousands more. Government scientists send a US soldier back in time—onto the train, ante-boom—and instruct him to identify the bomber. The soldier, however, is operating under two major constraints: First, he hasn’t exactly been teleported onto the train. He is, in fact, already dead; portions of his brain are being kept alive; and it’s only his consciousness that has been lobbed backwards into the day’s bad start. In order to conduct his investigation, therefore, he will have to occupy the body of some civilian already on the train; he will have to take as his avatar one of the attack’s imminent victims. Second, the government’s time-travel technology can only project him back eight minutes before the event, which interval he will have to relive over and over again until he can give the government a name: eight minutes—whoosh!—mass death—almost had it—and again, please—a fresh eight minutes are on the clock, like injury time….

The movie is set almost entirely in Chicago, and yet its plot is closely modeled on the invasions of Afghanistan and, especially, Iraq. That the detective-soldier is actually an Air Force helicopter pilot recently shot down by the Taliban is enough to establish that the movie has the war on terror on its mind. But it’s the soldier’s character arc—the transformation he has to undergo in the course of the film—that most powerfully channels the history of the past decade. What’s notable about Source Code—what makes it rather unlike an ordinary action movie—is that its hero keeps failing; he keeps letting the train blow up. The movie thinks it can provide an explanation for this, that it can make clear why an American soldier might be rather bad at stopping terrorists. Or rather, it thinks it can teach you—by teaching him—the difference between anti-terrorism and hapless, counterproductive bullying. At first, the soldier panics; he starts yelling at people; he engages in a little racial profiling; he throws a few punches and before long has drawn a gun on the other passengers. One onlooker asks: “You’re military? You spend a lot of time beating up civilians?” The turning point comes when the living officer running the mission from a government super-computer tells our undead hero: “This time try to get to know the other people on the train.” And from that point on, he just keeps ratcheting it down; stops confronting people; gets in nobody’s face; begins coolly collecting information; and finally, in one last triumphant replay of those endlessly fatal eight minutes, slips handcuffs onto the terrorist before anyone else on the train even knows they’re living amidst emergency. The movie, in other words, thinks it knows the right way to prevent a terrorist attack, and in this regard it simply mirrors David Petraeus, whose film this is. The soldier only succeeds, in other words, because halfway through he is given a new counterinsurgency manual, and the difference between hero-at-beginning-of-movie and hero-at-end-of-movie is meant to communicate the difference between Iraq in 2004 and Iraq in 2008. Source Code is, in sum, a Surge movie—it is, to my knowledge, the only Surge movie—with the New Way Forward staging itself in Illinois instead of Anbar, and with science-fiction conventions serving to communicate the panic and steep learning curve of the early occupation. The film’s hyper-repetitive structure is quite peculiar here. It could—and perhaps for a few minutes in the movie’s middle depths even does—convey the infernal quality of the war on terror, the way in which the “vigilance” to which we are enjoined is already a doom: One gets up every morning required again to avert Armageddon. But that’s not really Source Code’s vibe. Repetition in this movie soon stops seeming demonic and becomes instead the medium for learning and self-improvement—this is more somber Groundhog’s Day than it is trashy Sisyphus—and the film’s understanding of recurrence as basically harmless gets at the first of its interlinked fantasies, which is that the US should be able, at no cost, to keep trying to round up the terrorists until it gets it right. The movie to that extent signs on to the central myth of the Surge, which is that it was empire’s magic do-over in Iraq, a geopolitical mulligan.

That first point requires that we read Chicago as Baghdad in disguise, but if we instead take the movie’s North American setting at face value, then the movie’s politics become somewhat harder to parse. This difficulty goes back to the military-civilian mish-mash that is at the story’s core: The US soldier has requisitioned the body of some suburban schoolteacher—deputized the dead schmo—drafted his virtual corpse into war without end. Like any such in-between or crossbred figure, this character can be described in two contradictory ways at once, such that Source Code is simultaneously a story about a military guy becoming less militarized and a story about a civilian conscripted into special ops without his even knowing it. At the end of the movie, the soldier, having just arrested the madman and saved morning drive-time, gets to stay in his host body; he just skips off into the city with a pretty girl. At that level, the movie is an innocuous fairy tale about undoing some of the damage the US government is inflicting on a generation—not just giving a soldier his discharge papers and sending him honorably back into street life—but unkilling him, making stupid amends. But the equal-and-opposite story of the civilian who can suddenly break up terror plots sponsors a rather different fantasy, bespeaking the desire for a less obtrusive war on terror, a war less punishing to the Iraqis and the Afghanis, and kinder to Americans, as well—a war on terror without full body scanners at airports or the kind of heavy police presence that makes even white people nervous. In this sense, the movie gets us to wish that the war on terror were even more covert than it already is—that it were all undercover—its representative figure the plainclothes air marshal, the old-fashioned name for whom is Secret Police. Let me repeat a sentence I’ve already written: At the end of the movie, the soldier gets to stay in his host body, which means that the schoolteacher never gets his person back, and Source Code’s happy ending requires not that civilian life be rescued, but that it be negated.

Even by the low standards of Hollywood sci-fi, the movie’s fake science is notably addled and underexplained. Worse, having already committed to bushwa in its first act, it just ups and changes the rules in the last ten minutes, which I generally imagine is the one thing that a science-fiction screenwriter has got to promise you he’s not going to do. The audience has been told throughout the movie that the hero cannot change history; he is not really in the past; he has been inserted, rather, into a simulation built up from the memories of dead people; he can therefore only retrieve information; he will never actually save the train. But then in the last ten minutes we discover that each simulation has created an alternate universe after all, and the viewer has had the good fortune to arrive at last in the lone scenario in which every American gets to work on time. That’s feeble, to be sure, and irritating, but there’s something remarkable about it all the same. The single most striking thing about Source Code is that it brings to bear all the dopey arcana of cut-rate science fiction—the full arsenal of time-travel pataphysics and pop Leibniz—in order to generate … the world we already live in. It has maneuvered American normalcy—the AM commute, a commonplace Tuesday, just another trek to the office—into the position of the bizarro world or utopia you might otherwise have expected. The movie’s happy ending feels entirely rote, yeah, until, that is, you realize that it exists only in ontological brackets. By the time Source Code finishes, the Midwestern everyday—the one in which trains don’t blow into the sky—has become thinkable only as a science-fiction scenario, a bit of extravagant speculation. It has shriveled down to the implausible thing that a genre movie must scramble unconvincingly to achieve. 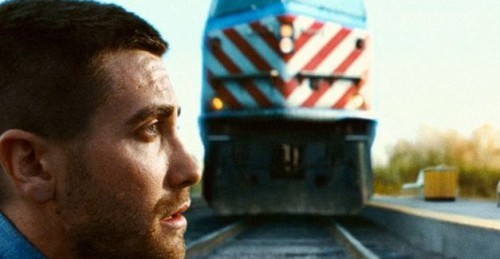