Caroline, Class of 2017, is a Political Science major and is concentrating in Environmental Studies.

The United States and China have had conflicting political agendas over the past few decades.  The American government continues to argue with Chinese officials over cyber security, human rights, trade protection, the South China Sea, etc. Disagreements have prevented successful negotiations from occurring at the international level over the past few years.  According to Mark Lynas, who attended the Copenhagen COP in 2009, “Chinese intransigence is the principal cause of the near-total breakdown of the last big climate confab in Copenhagen” (Lynas 2009).  However, over the last two years, the two nations have made incredible strides together toward creating plans for mitigating climate change (Schell 2015).

Last November, Presidents Xi Jinping of China and Barack Obama made a historic agreement between China and the United States calling for a joint effort in the mitigation of climate change (Office of the Press Secretary A).  A year later, the world is entering the COP21 Paris Climate Summit on November 30th continuing to December 11th, and the US and China look to be on the same team (UNFCCC 2015).  As the two largest economies and carbon dioxide emitters in the world today, both nations have a lot at stake during these negotiations.  However, due to the recent cooperation, the two countries will also have a strong influence on the negotiations and the actions of other nations around the world.

In early 2014, both the U.S. and China were showing signs of agreement on climate change.  In November of that year, China’s President Xi Jinping met with President Barack Obama in Washington D.C. where they declared the U.S.-China Joint Announcement on Climate Change.  After nine months of discussion, the United States and China agreed to approach the fight against climate change through joint effort.  The statement “describes a common vision” for what both nations agreed the climate agreement should look like when it is created in Paris in December 2015 (Office of the Press Secretary 2015 A).  In the agreed upon vision, both nations focused on the importance of a successful Paris Climate Summit, focusing on an economic transition to a low-carbon, global economy (Office of the Press Secretary 2015 A). 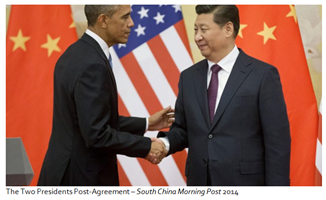 In the joint statement, there is also agreement about the importance of transparency within the system worldwide to build trust between nations over emissions related issues.  The agreement made set an international foundation for trust between nations. Before the agreement, climate experts and world leaders were skeptical the upcoming climate summit in December of 2015 would be successful.  Climate experts claimed that if China and the United States could not resolve their conflict, “few other countries will agree to mandatory cuts in emissions, and any meaningful worldwide pact will be likely to founder” (Landler 2014). The two nations needed to come to a common conclusion.  According to many sources, due to the agreement, China has begun a different approach to climate change that is more constructive than the last (Levi 2014).  Although the goals on both sides are lofty, the cooperation between the two nations is a great first step when moving together toward the Paris Climate Summit.

After what occurred in Copenhagen, what has changed?  There are two obvious answers: Economic Security and Human Health. The risk of climate change to China’s economic security has two major parts: Food Security and the transition of the world’s economy to sustainable or “green” economic ideas.

Due to the impact of climate change, China has begun experiencing extreme weather events.  According to the World Wildlife Fund, average temperatures in different regions throughout China have risen.  As more CO2 is emitted, temperatures throughout China and around the rest of the world will continue to increase (World Wildlife Fund 2015).  China’s average rise of temperature over the past few decades has been much higher than the global average (Chunfeng 2014).  Rising temperatures in China have led to glacial shrinkage, extreme droughts and significant reductions in wetland areas.  Intense droughts are challenging food security throughout the nation.  Humans are putting pressure on the landscape and water supplies to maintain food security in its current state.  As CO2 emissions aid in temperature increase, Chinese agriculture is threatened, and thus, China’s ability to feed its population is under threat.  China’s population continues to grow. Therefore, maintaining food security is vital.

Another significant threat to China’s economic growth is global economic change.  The idea of a “Green Economy” has begun influencing future goals for nations around the world, especially now that the need to mitigate climate change has been recognized globally.

Coal and fossil fuel burning will not drive future economies.  Cleaner forms of energy and sustainable industry will drive future economic growth around the world.  Emphasis on “Green Economies” took hold in 2011 with the United Nations Environmental Programme’s release of “Towards a Green Economy: Pathways to Sustainable Development and Poverty Eradication” (UNEP 2011).  The document focuses on the idea that “natural capital” and ecological services have value for nations around the world; and that creating sustainable economies in the present, will pay off in the future (UNEP 2011).  As China’s economy continues its substantial growth, China must begin to decrease its carbon footprint. The transition from a carbon-focused economy to a sustainable economy will protect from future spending on disaster relief.  As other nations around the world begin shifting to environmentally friendly energy consumption, China must too if it is to compete on the global stage (UNEP 2011).

China’s economy is one built on coal.  In 2013, it was recorded that China used coal for 68.5% of its energy to fuel its economic growth.  Since then, energy consumption has only increased (Dröge 2014).  With the intense burning of coal comes excessive air pollution.  Severe health impacts are becoming common due to air pollution throughout China, specifically in urban locations.  According to the Bloomberg Editorial Board, the air pollution in China kills on average 4,000 people per day (Editorial Board).  A study performed in 2015 proves that smog events due to air pollution increase the chance of death by cardiovascular and respiratory diseases (Zhou, 396. 2015).  Based on this study and others like it, it is very clear that China’s continued massive burning of coal is negatively impacting the health of its citizens (Zhou 2015).

For China to protect its economy and the health of its population, China must commit to the mitigation of climate change; thus, the joint agreement with the United States.

Scientists have concluded that a two-degree increase (some countries have claimed 1.5-degrees) will lead to devastating impacts around the world (World Resources Institute). As temperatures increase, the pressure to mitigate climate change is building.  The ability of China and the United States to work together, specifically during the climate summit, is essential to the worldwide success of climate mitigation. 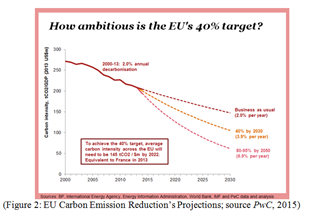 Three key common ideas between the US and China have potential to influence the rest of the world:

Idea #1:  The US and China have committed to limiting investments, both domestic and international, in carbon-intensive situations (The Office of the Press Secretary 2015 A).

Potential: Because the United States and China are the world’s two largest economies, the change in where the United States and China are willing to commit investments will influence investors around the world.  The two nations hold a lot of power due to economic status, and have the ability to drive the economy in lower-carbon direction if they wish (Henderson 2015).

Idea #2: The US has pledged US$3 billion to the Green Climate Fund, and China has “announced that it will make available… US$ 3.1 billion through a bilateral fund designed to help developing countries combat climate change. ” (The Office of the Press Secretary 2015 A).

Potential: China specifically showed developing and underdeveloped nations that financial help to mitigate climate change can come from a much more diverse group of contributors, including developing nations (Henderson 2015).

Idea #3: Most importantly, the two nations who have disagreed so often in the past are standing beside together on the future of our entire planet (The Office of the Press Secretary 2015 A).

Potential: The cooperation between the two countries proves the China can take a leadership position on the global stage. Specifically taking on the role as a leader supporting the mitigation of climate change, which could negatively impact its economy (Henderson 2015).

Interested in Learning More? Check out a few of these links for more information! 

More Information on the UNFCCC

China and the New Climate Economy. 2014. The Global Commission on the Economy and Climate. 2014. http://2014.newclimateeconomy.report/china/

Chunfeng, Wang. May 7, 2014. Why China will Fight for a Global Climate Deal Next Year. Beijing, China: ChinaDialogue. https://www.chinadialogue.net/article/show/single/en/6957-Why-China-will-fight-for-a-global-climate-deal-next-year-

Editorial Board. Sept, 25, 2015. China to Congress: This is How You Tackle Climate Change. New York, NY: Bloomberg. http://www.bloombergview.com/articles/2015-09-25/china-to-congress-this-is-how-you-tackle-climate-change

Lynas, Mark. 2009. How do I Know China Wrecked the Copenhagen Deal? I was in the Room. London, England: The Guardian. http://www.theguardian.com/environment/2009/dec/22/copenhagen-climate-change-mark-lynas

The National People’s Congress. March 2011.  China’s Twelfth Five Year Plan (2011-2015). Translated by The Delegation of the European Union in China.

Office of the Press Secretary. Sept. 25, 2015. B. Remarks by President Obama and President Xi of the People’s Republic of China in Joint Press Conference. Washington D.C.: The White House. https://www.whitehouse.gov/the-press-office/2015/09/25/remarks-president-obama-and-president-xi-peoples-republic-china-joint