Another day in Kyoto, another jam-packed day of learning and experience! I woke up this morning and went on a walk with Professor Yamamoto and Carl. We took a quick jaunt around town and ended up at Modoribashi, the bridge on which Sen no Rikyu’s statue was publicly burned. Hearing more about the history of the bridge (a place where executions took place and bodies were thrown over into the river) put some perspective into the history of the city. 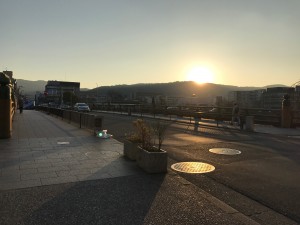 A beautiful Kyoto morning, as seen from our walk. This is the bridge.

Another aspect of the history of the city was visiting the temple at which Oda Nobunaga was assassinated (this is turning out to be a dark start to this post!). It’s very wild to me that such deep and rich history is living in all aspects of this city! 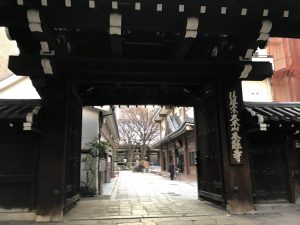 The temple at which Oda Nobunaga was assassinated.

On the way back to the hostel, we stopped at a yuba (skim of tofu) shop. It is a very old, famous shop — it’s really more of a yuba factory rather than a shop. Professor Yamamoto asked for a little sample box, and while it was being prepared, we were able to look around and watch the yuba being made. See below for some photos and video! The yuba tasted so wonderful warmed up with a little bit of shoyu! 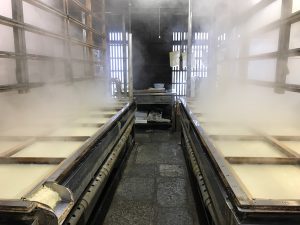 I just thought this lighting with the steam rising up looked awesome!

This is how they bring the yuba up: 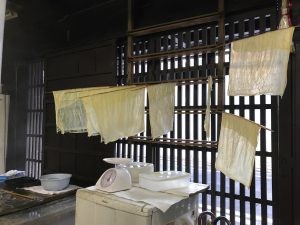 This yuba drying by the shop window looked like paper to me!

We then made our way to the event space in which we will be giving our final presentations and listened to two lectures: one on Noh theater and one on Nehan scenes. The first lecture on Noh was given by Professor Diego Palleccchia of Ritsumeikan University, who is also a practitioner of Noh theater as a shite, or main character, actor. The lecture on Noh was incredibly engaging and informative. After hearing more in depth information about the style of theater, I am even more interested in going to see a Noh performance this upcoming Sunday! I think my favorite part of the entire lecture was breaking into two groups and trying to mimic the kakegoe — shouts used to communicate between musicians — one group as the musician with the shoulder drum and the other group (the one I was in) as the musician with the drum held by the waist. I found the rhythm and shouts to be quite challenging! Knowing more background information will be very valuable on Sunday! 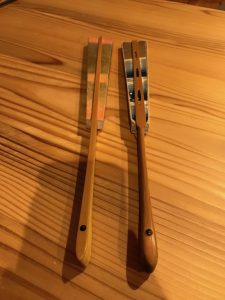 The different schools of Noh theater have they’re own distinct styles for fans! 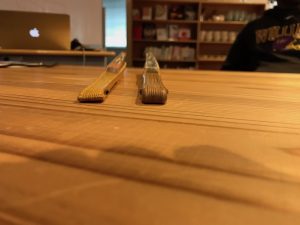 More angles of the fans.
Notice the difference between these two schools of Noh Theater.

Professor Catherine Ludvik then returned to give our class another lecture, this time focusing on the Nehan scenes, or the passing of the historical Buddha. I found this lecture to be really inquisitive and eye-opening. I had no idea that there was an idea such as “kitamakura” where sleeping with your head facing north was not good until death, since the Buddha died under the eight sal trees, it’s head facing North. We discussed the different Nehan scenes that could be found all over Japan, and she then further focused on Itō Jakuchū, the man who painted the famous “Vegetable Nehan.” The creativity and originality within the painting is more than fascinating. This nehan features a daikon radish as the Buddha and various vegetables as different aspects of the traditional piece. I very much look forward to seeing this piece in the Kyoto National Museum!

Mayumi Oda’s painting and rendering of a vegetable nehan was similar but simultaneously entirely different from Jakuchu’s pieces. In this rendering, the daikon looks much more feminized, and there are various bugs and animals as a nod toward organic gardening. Oda’s piece intrigues me, and I’d like to know more about her work with goddesses and Buddhist beliefs.

Our group visited Mr. Akihisa Yamamoto at his studio/workshop in Kyoto following the lectures. This was my favorite part of the day. Mr. Yamamoto, who is believed to be the only makkyo sacred mirror maker remaining in the whole world, gave us an introductory presentation to his work. Translating this one was a little harder, since there were some very difficult vocabulary and dialectical differences, but I’m always glad and appreciative of the opportunity to translate and practice my Japanese, as well as the second-layered thinking to process all the information. I won’t detail everything he talked about, but something that astounded me was the difference between makkyo and regular bronze mirrors. The only difference is in how much the mirrors are filed, sanded, and polished. While regular bronze mirrors are about 3mm — 4mm thick, the makkyo are polished down to 1mm. The makkyo are polished down to a point where the design is not concave, but convex and thus rebounds the light as an image! I loved that Mr. Yamamoto let us try the polishing and even casting our own design! I was slightly startled that Mr. Yamamoto only has a supply of the specific wet stone and charcoal to polish his mirrors for him and one other person in the generation that will succeed him to work. Finding a person to take over the work, as well as finding a polishing material to replace the coal and wet stone, are exemplary of trying to balance the tension between the contemporary world and the historical one. 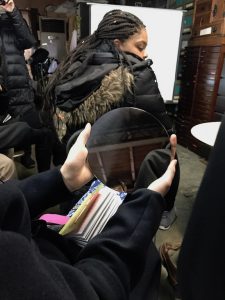 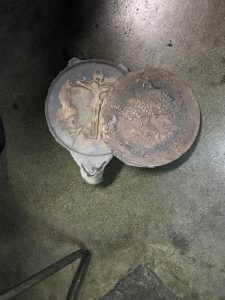 Christians used makkyo to hide images of Christ ! Here, there is a fake mirror to cover the design of Christ.

Mr. Yamamoto’s discussion of his work had moments that resonated with Mr. Miyamoto’s discussion of his work on Buddhist sculptures. Both men discussed the spiritual aspect of their work and especially emphasized the need for balance in their approach to grappling with trying to make their work more known and accessible to a contemporary audience and trying to maintain the traditional, genealogical aspect of their craft. I have a feeling this tension will be a running theme throughout the interviews with these artisans who are working to keep their crafts alive in their traditional formats. 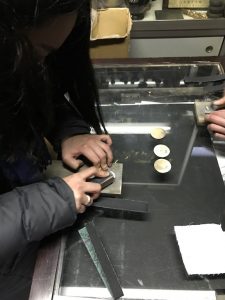 I try my hand at polishing! 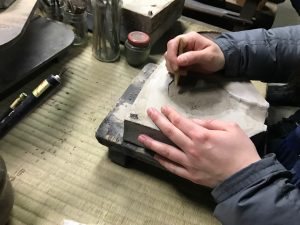 I try my hand at designing a mold!

Today was a more understated day, but one that was filled with subtle points to pick up on, and I deeply appreciate the quiet moments between myself and others that occurred throughout the day. It’s hard to believe how quickly our time in Kyoto is passing by, and I hope to have more quiet moments of contemplation throughout the hustle and bustle of each day.