The day began with a lecture on Noh from Professor Pellecchia. I was pleasantly surprised by how much I enjoyed the small Noh videos he showed. Specifically, I found the musicians’ combination shouts and playing to be strangely entrancing.  I’m still unsure as to why they use shouts to communicate instead of just slightly facing each other. I also didn’t realize that Noh performances were truly one-offs, with no official Noh production teams or companies. For me this does make the performance we will see more special.

After lunch Professor Ludvik gave a lecture on Nehan paintings. In traditional Nehan paintings, the Buddha is surrounded by grieving followers and animals. They were all clearly a ways off from enlightenment judging by their extreme reactions to the Buddha’s death. In contrast, the vegetables featured in Ito Jakuchu’s Vegetable Nehan seemed completely serene and unmoved; a sign of enlightenment.  Reaching enlightenment does require discarding aspects of human existence. How close must a human come to being a vegetable to become enlightened? If enlightenment requires complete indifference and passivity, what use are enlightened beings? I’d like to get Professor Ludvik’s opinion at some point.

My favorite part of the day was the tour of Yamamoto-san’s workshop. He gave us an excellent history of bronze mirrors that definitely helped clarify the lineage and evolution of makkyo. After explaining what his job consisted of and demonstrating the steps necessary to create a mirror, Yamamoto-san allowed us to try out his methods on test pieces. We attempted casting tin, polishing, and making our own mold. The demos clearly required a good deal of setup and displayed Yamamoto-san’s dedication to engaging visitors and generating interest in his craft. Like Miyamoto-san, one of his main dilemmas was how to strike a balance between producing enough pieces to support himself while maintaining high quality standards. He’s been collaborating with other artists to find ways for him to produce pieces that retain the essence of mirror making but take less time than doing a full mirror. This kind of adaptation seems to be a common thread among practitioners of ancient crafts. Artists are being forced in many cases to decide what exactly defines their work and use that to guide novel experimentation. Though it’s an uncertain time for many artisans, it’s also one of great opportunity and innovation. With savvy use of the internet and some creativity I think Yamamoto-san can find new markets and retain the techniques that distinguish his work. 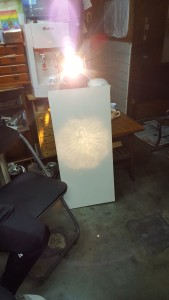 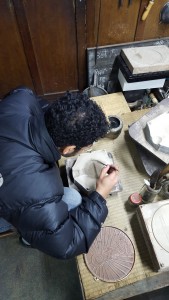