First measurement of 115In HFS in the 6P3/2 excited state.

This experiment used two lasers — the 410 nm GaN diode laser system described above, as well as an InGaAs diode laser system operating at 1291 nm.  By overlapping the blue and IR lasers in a heated quartz indium cell, we perform two-step spectroscopy.  Here is a relevant energy level diagram.

The blue laser selects one velocity class of atoms for first-step excitation, so that the second step spectrum is nearly Doppler-free.   We thus need to lock the blue laser to the first-step transition, and scan the IR laser, searching for the small absorption induced by the latter. Since only of order 1% of the atoms are selected by the blue laser, we detect the very weak IR absorption signal using lock-in detection.  We chop the blue light and detect the IR transmission in a photodiode phase-sensitively, giving us high signal-to-noise, background free hyperfine spectra of the excited 6P3/2 state.  Here is a layout of the blue laser locking, and two-laser spectroscopy setup.

Quantum mechanical selection rules imply that the IR laser can drive only three of the four hyperfine transitions at a time.  We produce both 3-peak spectra, and, with the aid of an electro-optic modulator (EOM) to produce first-order FM sidebands to the laser, we also produce “9-peak spectra”, which are then fit to a sum of Lorentzians to obtain frequency splittings.  The EOM technique allows convenient calibration and linearization information for the scans, since we drive this device with an RF synthesizer of exactly known frequency.

We obtained the three hyperfine splittings of the F=3,4,5,6 manifold of the 6P3/2 state with uncertainties of roughly 0.5 MHz.  This allows us to extract dipole, quadrupole, and octupole hyperfine constants for this state of indium for the first time.  The dipole constant agrees well (within 2%) with recent Safranova group calculations.  With additional atomic theory work, our precise measurement of the quadrupole hyperfine constant would allow the most precise determination to date of the Indium-115 nuclear quadrupole moment.

Two-step spectroscopy in thallium for HFS / IS measurement

With a very similar two-step spectroscopy scheme, a GaN diode laser system operating at 377.7 nm in our lab, and the same IR laser system used for indium (now tuned to 1301 nm) we explored the thallium 7p1/2-state hyperfine splitting, as well as the Tl-205 / Tl-203 isotope shift (see energy levels and schematic below).  By locking the laser in between the two isotopic resonances, we can excite both isotopes, and by controlling the relative propagation direction of UV and IR lasers, we can then distinguish the true isotope shift from the relative Doppler shift of the isotopic components.  Details of this work can be found both in this Physical Review article, as well as in the theses of David Kealhofer ’13 and Gabby Vukasin ’14 (see home page). 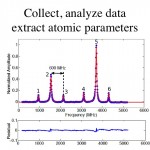