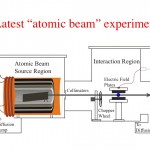 Some years ago, we completed an experiment measuring the Stark shift (scalar polarizability) in the 378 nm 6P1/2 – 7S1/state transition in atomic thallium.  Here is the optical layout for producing UV light using a frequency-doubled red diode laser, as well as a view of the interaction region configured for this experiment.  Our final value had a 0.5% uncertainty, improving the precision by more than an order of magnitude over previous work.

This work was published in 2002 with three Williams honors students as coauthors.  In 2006 the atomic theory group of Safranova et al. (U. Delaware) calculated this atomic polarizability from first principles, using ab initio thallium wavefunctions, and produced a value in remarkably good agreement with our experimental result.

Recently, we completed a similar polarizability measurement in a beam of atomic indium, where the much lower vapor pressure/density required the use of FM spectroscopy to detect the weak atomic absorption.  This work, which had a final uncertainty of 0.3%, was published in 2013 and in the same issue of Phys. Rev. A, the Safranova theory group published an ab initio calculation that agreed beautifully with our result.  We also realized that a comparison of our result to the theory could be used to infer highly-accurate values for the excited-state lifetimes in both indium and thallium.  See the 2013 publication co-authored with M. Safranova on this subject.

We are now pursuing a two-step excitation experiment in the indium atomic beam, to measure the much larger polarizability of the 6s1/2-6p1/2,3/2 excited state transitions.  This experiment will make use of the two-color spectroscopy work we have developed in our vapor cell studies.

The final error bar in the 2013 result was dominated by uncertainty in the electric field plate separation (which was measured mechanically, using gauge blocks).  We have begun the design and construction of a new set of plates, using optical flats (instead of polished stainless steel) coated with ITO, and plan to measure the separation using an optical interferometric technique. 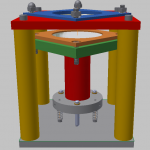