↓
Home→Explore the Era→The Fifteenth-Century Organ
The Fifteenth-Century Organ
The foundation documentThis legal document, drawn up in the spring of 1487, enabled musicologist Reinhard Strohm, almost five hundred years later, to identify the occasion for which Obrecht composed his Missa de Sancto Donatiano… establishing the memorial Mass for Donaes de MoorDonaes de Moor belonged to the upper eschelon of the merchant class in Bruges… explicitly required the use of the “great organ” during the ceremony, and set the organist’s compensation at three grooten and the organ blower’s at one groot. Presumably the new organist at the Sint-JacobskerkIn Donaes de Moor’s and Adriane de Vos’s time, the Sint-Jacobskerk, dedicated to St. James the Apostle, was the most affluent of the parish churches in Bruges…, Jan van Hille, played for the Mass, but precisely what role the organ took is unknown. Perhaps, as was the practice at the nearby collegiate church of Sint-Donaas, it accompanied or alternated with certain plainsongs (the sequencea style of text setting in which each syllable usually corresponds to a single pitch would seem a likely choice), and may also have given the pitch for the plainsong intonations. The location of the instrument on the choir screen, some distance from the private chapel, would have made it difficult to coordinate with singers performing the complex polyphony of Obrecht’s Mass, although its use to double the tenors on the slow-moving plainsong cantus firmia Latin term meaning “firm song,” applied to a previously existing melody, usually drawn from the chant or song repertories, used as the basis for a new polyphonic setting can’t be ruled out. A sense of the architectural placement and proximity of the fixed organ to the liturgical action can be gleaned from an illumination in an early sixteenth-century Book of Hours painted by Simon Bening, who lived and worked in Bruges from 1510 until his death in 1561.

In this re-creation of Donaes de Moor’s memorial Mass, we imagine Jan van Hille improvising a prelude prior to the beginning of the ceremony, while those attending entered the chapel to the tolling of bells. Likewise, we imagine the possibility that Jan might also have improvised a bit following the Offertory chant, while the celebrant prepared the offering of bread and wine, and again after the dismissal, as people made their way out of the church.The fifteenth-century “great organ” of the Sint-Jacobskerk on which Jan played has long since disappeared along with the choir screen on which it stood, and no documents or pictures survive to inform us about the details of its construction. It is, however, possible to surmise certain general features on the basis of historical information about the development of the fixed (i.e. not portable) church organ during this period. Both documentary (i.e. treatises, builders’ contracts) and iconographic (i.e. paintings, illuminations) evidence reveal clear regional differences.

Unlike Italian and southern French organs of the period, which generally favor a single chest of pipes with just one manual (keyboard), Flemish organs of the fifteenth century were generally “double-chest” instruments, each with its own bellows and manual. One manual controlled the Blockwerk (the main chest of principal pipes) and the other the Ruckpositiv (a smaller chest of pipes placed at the organist’s back). Usually only the Ruckpositiv was capable of two or three different timbres, enabled through the use of stops (“mixtures”) that allowed the organist to combine different ranks of pipes to create different colors. Although Henri Arnaut de Zwolle’s well-known organ treatise from the mid-fifteenth century mentions reed stops, flute and reed stops were not in mainstream usage until the early sixteenth century. There were probably no separate pedals on the Sint-Jacobskerk organ in Obrecht’s day; they too only become common after c.1500.

Interior pipes were generally fashioned from an alloy of lead and tin, with tin serving for the front pipes, and the bellows, pumped manually, were of leather. The organ case was of wood, and only modestly decorated if at all.

The organ used in our re-creation is played by Wim DiepenhorstWim Diepenhorst studied organ and church music at the Sweelinck Conservatorium in Amsterdam with Hans van Nieuwkoop and musicology at the Rijkuniversiteit Utrecht… on a small, single manual instrument built c.1550 by Jan Slegel for the Grote St. Andreaskerk in Hattem, The Netherlands. 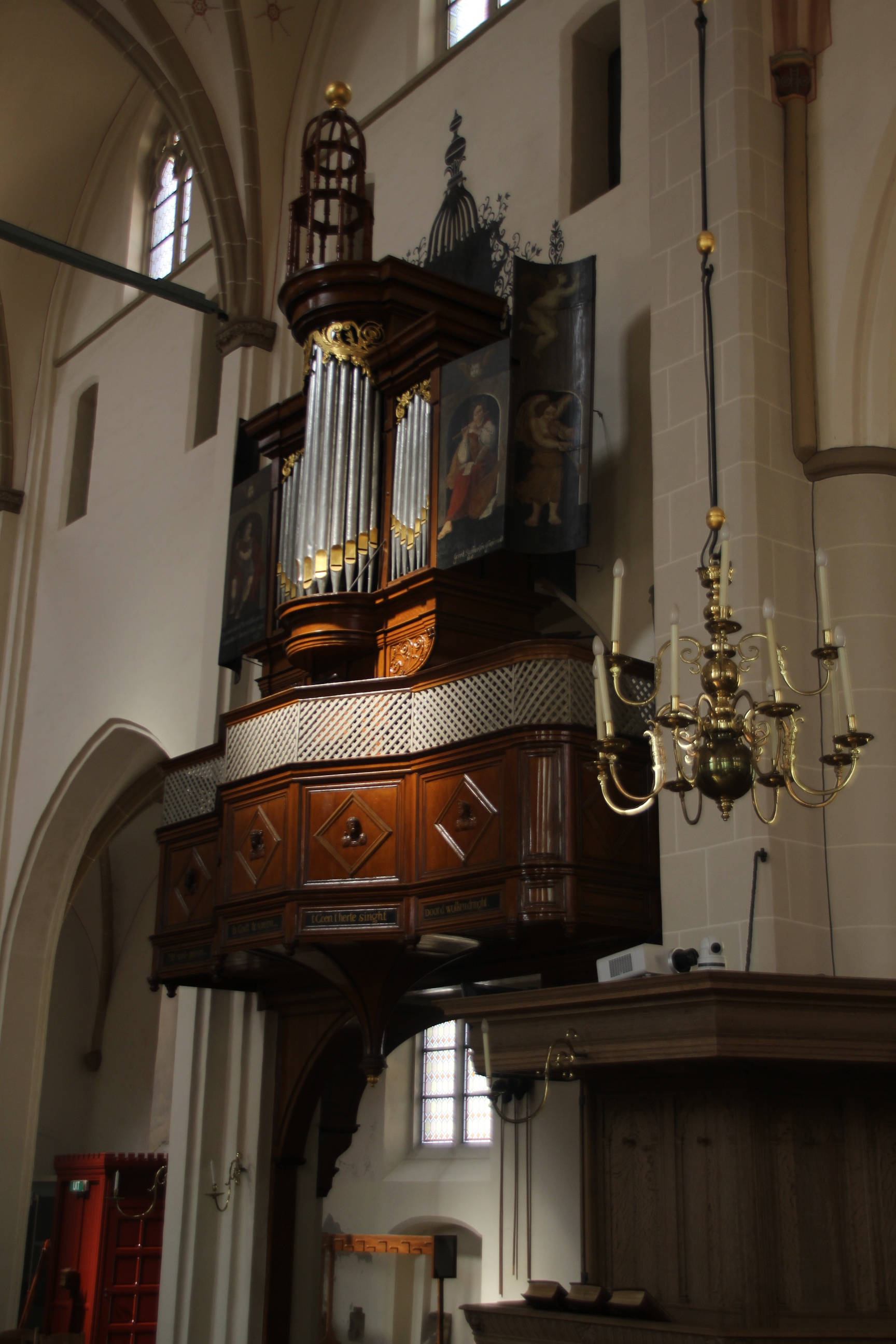 This file is licensed under the Creative Commons Attribution-Share Alike 4.0 International license.
You can read more about this rare gem of an instrument and view more pictures of it here.
Additional pictures, including views of the manual and stops, can be seen here.

Williams, Peter. A New History for the Organ: From the Greeks to the Present Day. Bloomington and London: Indiana University Press, 1980. See in particular pp. 46-76.