In 1184, the original Sint-Donaaskerk structure was damaged by a fire and rebuilt in a Romanesque style. The new church sat on the north side of the “burg”, a complex of buildings surrounding Bruges’s central square, which served as the seat of local authority in the city. Beside the church was the provost’s palace, with the city hall and assembly hall of Flemish nobility across the square, the castle to the east, and the prison to the west. An aerial image of the Burg, with the church at the bottom left, is shown below.

The church had a traditional cruciform shape, with the choir and apse oriented as customary towards the east. The long side of the cross paralleled the north edge of the square, with the main entrance through the south transept, as captured in this early 16th century illustration by Flemish artist Gerard Horenbout, who lived and worked in the nearby town of Ghent. 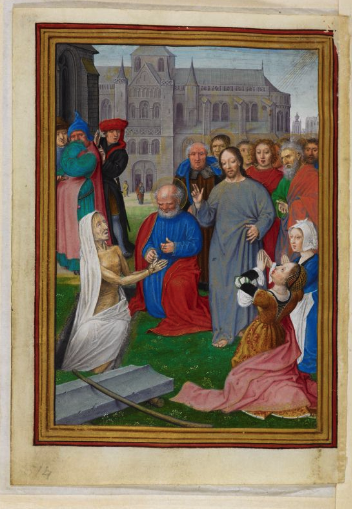 Even more detail is visible in this 1641 illustration of the front of the church by Flemish cleric and historian Anton Sander: 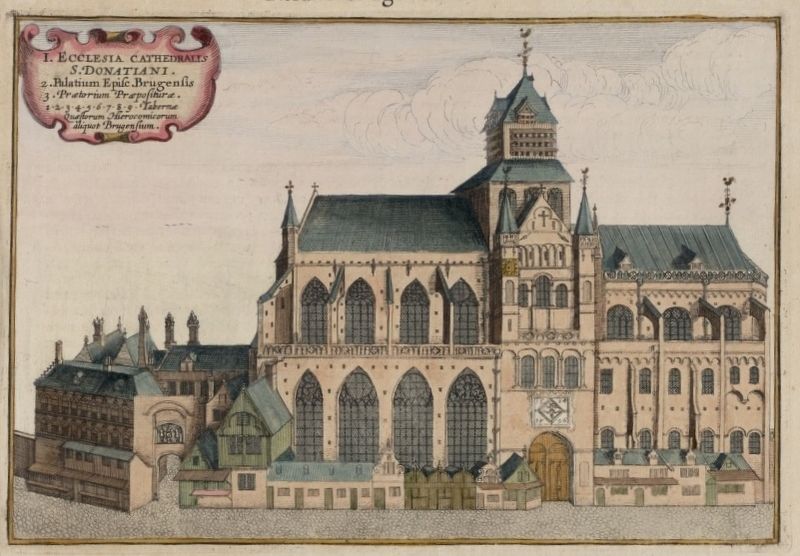 For most of its existence, including when Obrecht lived in Bruges, the Sint-Donaaskerk was not a cathedral, because it was not the seat of a bishop. Instead, like many of the most important churches in medieval Flanders, it was a collegiate church – governed by a non-monastic community of clergy called a “college of canons”. However, this did not make the Sint-Donaaskerk any less powerful in the growing city of Bruges. Indeed, its provost, the head of the college of canons, was also a chancellor of Flanders, endowed with secular as well as spiritual authority.

Daily activities at the Sint-Donaaskerk exemplified ecclesiastical life of the time. The college of canons performed Mass as well as the daytime hours of the Divine Office every day, and they employed an impressive administrative staff. In the century before Obrecht was born, its musical activity in particular flourished. From the mid 13th century, records show the employment of an organist, a rector scholarum to teach music, and a succentor, who was responsible for supervising the choir. In the 14th century, that list expands to include numerous choirboys, composers, and music copyists, who had the laborious job of notating and illuminating the new liturgical books purchased by the church with increasing frequency. In addition to psalters, missals, ordinals, and sequentiaries, these books are thought to have included codices with special liturgies for holidays, and music for festival processions and liturgical dramas. The first reference to polyphonic music in the Sint-Donaaskerk dates from 1377, when the church added 12 new leaves to a liber motetorum, a book of polyphony. In 1421, the chapter of the Sint-Donaaskerk provided a large endowment for the revitalization of the boys’ choir, with the explicit purpose of performing regular polyphonic masses.

ObrechtJacob Obrecht was a South Netherlandish composer known mainly for his substantial output of Mass Ordinary, as well as for his motets and songs… was one of a number of famous composers associated with the Sint-Donaaskerk. Gilles de Binchois and Guillaume Du Fay both held non-resident benefices at the church, and Gilles Joye served as a resident singer and canon. In 1484, Jean Ockeghem, the most celebrated composer of the time, visited Bruges, and the church held a banquet in his honor. Obrecht served as succentor between 1485 and 1491, and again from 1498 to 1500, during which time he was responsible for training and leading the church singers on a daily basis.

The Sint-Donaaskerk was raised to the status of cathedral in 1560, and it remained at the heart of spiritual life in Bruges until its destruction during the French Revolution. The Crowne Plaza Bruges Hotel now occupies much of its former site, but a partial outline of the old walls is inlaid in brass on the Burg to mark where the church once stood. In 1955 the foundation of the church was uncovered during construction of the Crowne Plaza, and its underground crypt, shown below, can still be seen today in the hotel’s cellars. 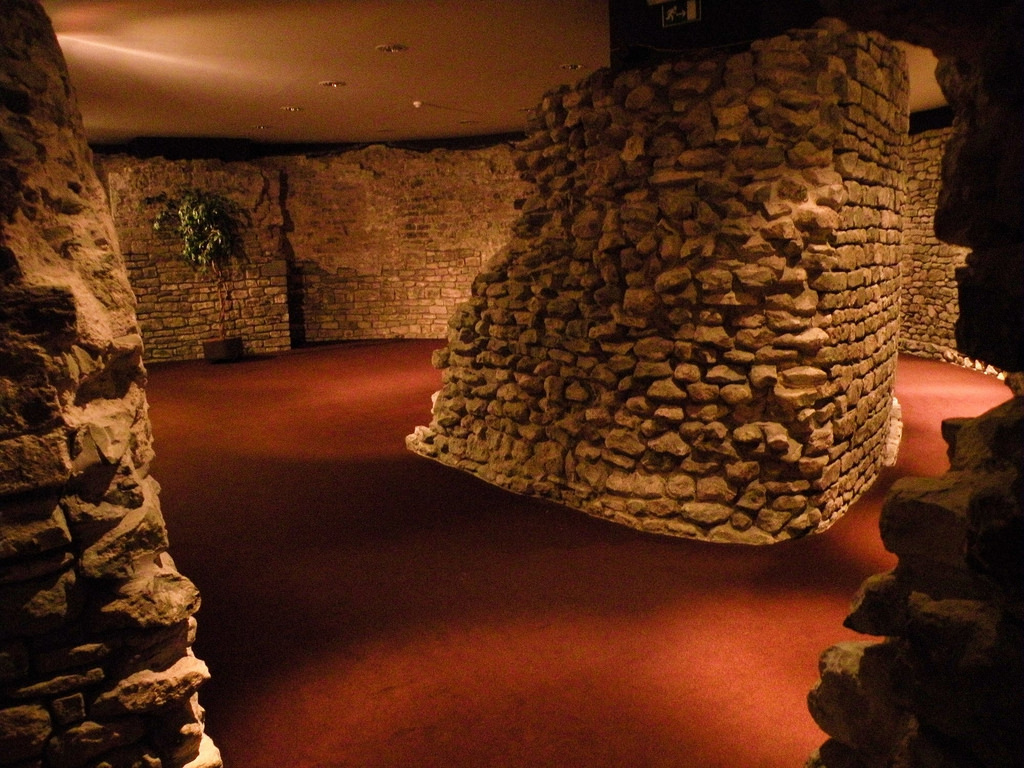