Download the Google Earth placemark to view the Sint-Jacobskerk and modern-day Bruges.

Marcus Gheeraerts the Elder (ca. 1520 – ca. 1590) was born in Bruges, but may have had early training and employment in another town before joining the Guild of St. Luke in 1558. While he worked with many forms of art, he is best known for his etched book illustrations (including his naturalistic Aesop series) and his status as the first known etcher working in England. The latter followed his banishment from Bruges in 1568 for his satirical Allegory of the Iconoclasts, a political print that revealed his Reformist position towards the Church. His son, also Marcus Gheeraerts, became a portrait painter in London, and some suspect that their work has occasionally been confused.

The Bird’s-Eye View of Bruges, his first major etched work, was commissioned by the Bruges city council in 1560 to promote trade in the port city. With ten copper plates, this 100 x 180 cm map depicts houses, streets, and canals that are still recognizable. The inscription reads, “Illustrissimo amplissimaque senatui Brugensi Marcus Gerardus pictor et sculptor dedicabat” (the painter and sculptor Marcus Gerardus was dedicating [this] to the most great and illustrious senate of Bruges). 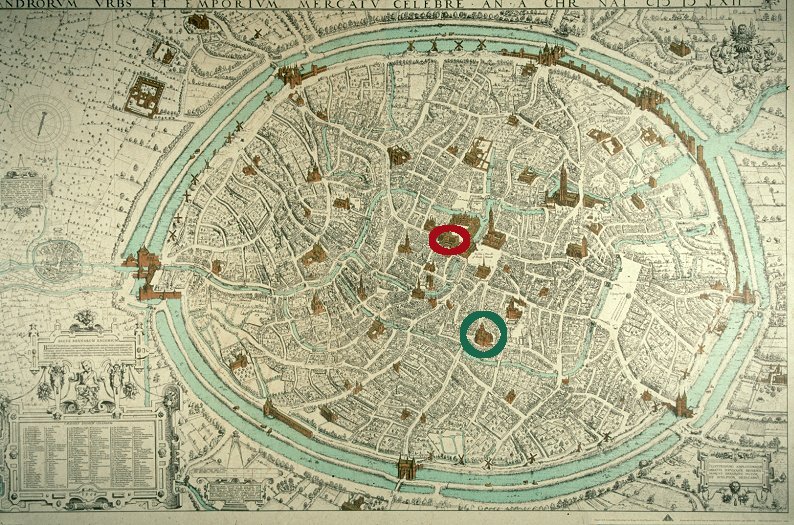 Twelve years later, Gheeraerts’ map of Bruges served as the basis for the map of Bruges included in the first volume of Braun and Hogenberg‘s great atlas of city maps from across the world, the Civitatis Orbis Terrarum (Cologne, 1572). Click here to visit this map in detail; a closeup view from that map shows the Sint-JacobskerkIn Donaes de Moor’s and Adriane de Vos’s time, the Sint-Jacobskerk, dedicated to St. James the Apostle, was the most affluent of the parish churches in Bruges… quite near the canal where it still stands today. 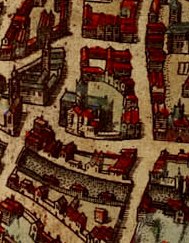