Williams College Math Camp (WCMC) is a ten-day residential math camp for mathematically talented high school students. Campers will be immersed in mathematics, learning about areas of math not typically seen in a high school curriculum. Campers will learn how to look for patterns, study examples, make conjectures, and rigorously prove their discoveries.

A typical day at math camp includes the following:  group problem solving sessions, interactive lectures with ample time for student-driven mathematical discovery, a math talk by an award-winning mathematician or a panel discussion on what it’s like to major in mathematics at college, and plenty of time for fun including hiking, museum trips, and a math movie night!

The primary area of mathematics we will explore is the theory of numbers.  What is number theory?  Number Theory is one of the oldest branches of mathematics.  It’s the reason your credit card information is safe when you make a purchase online. We will discover the beauty and usefulness of numbers, from ancient Greece to modern cryptography.  Starting with nothing more than basic high school algebra, we will develop the logic and critical thinking skills required to discover and prove mathematical results. Topics to be covered include the meaning and content of proof, prime numbers, divisibility, rationality, modular arithmetic, Fermat’s Last Theorem, the Golden ratio, Fibonacci numbers, coding theory, and unique factorization.

“I feel that I was enlightened mathematically.  Before I attended WCMC my mind was closed to certain mathematical areas and possibilities.”

“It was an amazing experience.”

“I realized that … [math] requires much more creative thinking than I thought it did before.”

“I think that the camp was an incredible experience and an awesome opportunity to see math in another light. I think that it pushed me more than I have ever been challenged in mathematics and it gave me a better idea as to whether or not I want to major in mathematics (and it convinced me I do).”

“Having to work together on problem sets was wonderful because you had to discuss ideas and thoughts, and you push each other to think better.”

“It’s broadened how I see mathematics and expanded my view of what mathematics can be. I really enjoyed my experience here!”

“Thank you so much, this has been awesome! … there should be a part 2 so we can come back!”

“A whole new door of mathematics has been opened for me.”

“My understanding of math has skyrocketed.”

“I love number theory, just like I love calculus. And I could make a proof, which wouldn’t fit on this page. Thank you for this amazing experience!”

“I never imagined that you could prove all these amazing theorems using logic and math I know… The math was definitely challenging and unlike anything I had done before and it made me think in ways that were brand new to me. I was never in a bad mood all week and I had a great time meeting everyone.”

“… The challenging course work has given me confidence in approaching high-level math and opened my eyes to many different aspects in the field. I particularly appreciated the speakers and panels you organized and left Williams much more informed about higher studies and careers in math. Beyond the challenging work, I thoroughly enjoyed the extracurricular activities and developing friendships with the other students. The overall experience far exceeded my expectations….”
“Before this week, I thought everything in math had already been proven, and now I know differently. Also this camp made me want to major in math.”
“It was such a great experience and I learned more than I ever thought I could in 10 days. It was truly enlightening and so much fun.”
“This camp really invigorated a stronger interest in studying math at a deeper and higher level for me.”
“I had an amazing experience in my … time at camp. The other kids were by far the smartest, and likely the most interesting kids I have ever met and I was so glad to get
know them, as I know they are the future of the mathematics world… thank you, Professor Pacelli, for broadening my knowledge of what my future in mathematics looks like, as well as challenging me beyond what any teacher has ever done for me.”

“The lectures were better than from any other teacher I’ve ever had!”

“I gained an appreciation for different kinds of math than what is studied in school. I also feel that my math skills have greatly improved and that I am now able to write
complete, complex proofs. It was cool to learn about the various applications math has in the real world.”

“I now know that ‘math for math’s sake’ isn’t useless at all, but leads to new fields of math with new applications, and the scope of math is big enough to always have something new to prove.”

“Thank you for one of the most amazing weeks of my life. I have learned so much, and I can’t wait for more fun math in my future.”

“From the career panel, I learned that math is helpful for logical thinking even if you do not have a career in mathematics. I think I am much more likely to major in math, now.”

“I have a much better idea of what mathematicians actually do, and how math involves this structured way of thinking that is useful for almost any field that I wish to go into.”

“I learned that there are other girls like me who love math and aren’t ashamed of it, and it makes me excited to meet more.”

“Previously I thought of math as a combination of logic, calculations, word problems and derivatives… However, at camp, we delved into much deeper areas of math, and I will leave with a greater understanding and appreciation, as well as a new curiosity, to see the proof of each math theorem I encounter.”

“My biggest fear at the moment is that I will be bored in math class for the whole of next year, now that I’ve been shown how pretty math can be.”

“Thanks so much for such a fun week. I’ve never had so much fun and learned so much math at the same time. Thanks for reminding me why I love math.”

“I easily consider those nine days to be among the best weeks (about a week, anyway!) of my life, if not because of the overwhelming amount of crazy math we learned then for the new perspectives that I got to view the subject from and for the incredible people I got to meet.”

“Thank you for teaching us so much – I have never had an experience so equally humbling and inspiring.”

“The entire attitude of the camp was to get us thinking in different ways about things and being curious as to what or why something is.”

“The people, the attitude, and the instruction at WCMC were all phenomenal. QED.” 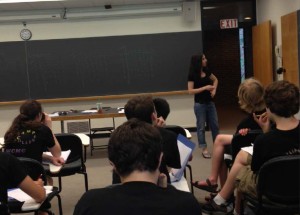