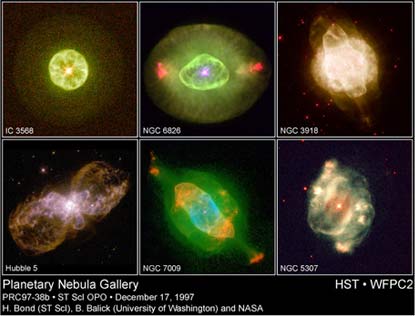 RESEARCH INTERESTS
My research focuses on the chemical compositions of planetary nebulae (PNe), in particular the abundance patterns and ratios that constitute clues to their nucleosynthetic origin; the late stage evolution of low- and intermediate-mass stars; and the chemical enrichment of the the Milky Way and other galaxies over time.

Planetary nebulae are glowing gas shells ejected by low- to intermediate-mass stars near the end of their lives. They represent a treasure trove of information about stellar evolution, nucleosynthesis and environment. Their chemical compositions, central stars, morphology and origin have been the focus of my work. Astronomy students have participated extensively in all aspects of my research, joining my colleagues and me on observing trips as well as working on campus over the summer and writing senior honors theses.

CURRENT WORK
My recent work has focused on chemical abundances in planetary nebulae as a means to understand the formation history of the Milky Way Galaxy and M31 (the Andromeda Galaxy, our neighbor and sibling), concentrating on the spiral disks of both galaxies. My main collaborators are Prof. Richard Henry from U. Oklahoma and Prof. Bruce Balick from U. Washington. Our team, which includes astronomers and students from institutions in the United States and Spain, was awarded a three-year National Science Foundation grant for this work in 2008. A new aspect to this research, described in the following paragraph, concentrates on the most luminous PNe to understand what underlies their reaching the same maximum luminosity in all galaxies, despite their very different environments and star-formation histories.

My latest project is a review paper/tutorial on planetary nebulae, which I am writing with  Prof. Richard Henry from U. Oklahoma; we anticipate publication next year.

The Most Luminous Planetary Nebulae in the Andromeda Galaxy (M31) and the Large Magellanic Cloud
We are studying the most luminous PNe in the Local Group of galaxies. Because of the the difficulty in observing PNe at the large distances of the most far-flung member galaxies, and the problem identifying luminous PNe that may be obscured by the thick dust clouds in our own Milky Way, we focus on two nearby galaxies: M31 and the Large Magellanic Cloud (LMC). Our collaboration, including R. Shaw (National Optical Astronomy Observatories), B. Balick (U. Washington), R. Corradi (Instituto Astrofisica de Canarias), and G. Jacoby (Giant Magellan Telescope), was granted time in the fall of 2015 to observe in PNe in M31 with the Gran Telescopio Canarias, and in the LMC with ESO’s Very Large Telescope. From the spectra of these PNe we can derive their chemical compositions and the characteristics of their central stars. The goal is to understand the history and demographics of these PNe and their stellar progenitors.

My honors student, Anneliese Rilinger ’17, worked on this data for her honors thesis, which will be part of an upcoming publication. Anneliese is now a Ph.D. student in Astronomy at Boston University.

Planetary Nebulae in the Andromeda Galaxy (M31)
Using the 3.5-meter ARC telescope at Apache Point Observatory in New Mexico (which we operate remotely via the web from the Williams campus!), colleagues and I initially observed 10 PNe in the the Andromeda Galaxy. These objects are so faint that even larger telescopes are necessary for good detection of faint emission lines; we obtained time with the 8-meter Gemini North telescope in October 2009 to observe six more PNe. Emma Lehman ’10 traveled with Henry, Balick and me to the Big Island of Hawai’i for the Gemini observations which formed the core of her senior honors thesis. Here is Emma with me, Dick Henry, and Keck Northeast Astronomy Consortium exchange student Andrew Koontharana (Swarthmore ’12), during Dick’s visit here in July 2009. During the summer of 2011, Matt Hosek ’12, Aven King ’12, and Alice Sady ’13 worked on generating photoionization models for these PNe. We published a paper in 2012 in the Astrophysical Journal.

Since then, we have continued to observe M31 planetary nebulae at APO. Starting in the fall of 2013, Williams has joined with several other small colleges in a consortium to obtain observing time at APO on a regular basis, allowing our students to observe either remotely from campus, or to travel to observe on-site in New Mexico.

In 2012, we began a collaboration with Romano Corradi of the Instituto de Astrofisica de Canarias, and observed two PNe with the 10.4-m Gran Telescopio Canarias (GTC) on La Palma, Canary Islands, Spain, one of the largest optical telescopes in the world. The data from this telescope provide an unprecedented look at M31 PNe spectra. We published a paper in 2013 in the Astrophysical Journal describing the abundances of the ensemble of these PNe and implications for the history of M31. We obtained further observing time with the GTC in the fall of 2013 to observe eight more PN. This data was the basis for Kerry Hensley’s (’14) honors thesis, results from which were published in a paper in the Astrophysical Journal. Kerry is now a Ph.D. student in Astronomy at Boston University.

In the summer of 2015, MeiLu McDermott ’16 and Tim Nagle-McNaughton ’18 worked on photoionization modeling of the M31 PNe observed with the GTC. Using Cloudy, it typically took up to 100 runs before a successful model could be discovered. MeiLu and Tim created a set python programs (The Dank Suite), that automates the running of many Cloudy models to find the best solution.

Carbon Abundances in Galactic Planetary Nebulae
Dr.Reggie Dufour (Rice U.), Henry, Balick and I (plus Dr. Dick Shaw of NOAO) were awarded 32 orbits of Hubble Space Telescope time in Cycle 19 to observe a sample of ten planetary nebulae in the ultraviolet and optical, in order to determine the accurate abundances of carbon, nitrogen and oxygen. Results from this study will enable us to understand the relationships among these elements and the conditions in the progenitor central stars that produced them. In the summer of 2013, Kerry Hensley ’14 and Tina Seeger ’15 worked with me to analyze this data. The first and second papers from this project were published in 2015 in the Astrophysical Journal; the third is in press.

Previously, beginning in the fall of 2003, I worked with Henry and Dufour on a project with the Hubble Space Telescope to obtain images of planetary nebulae and H II regions in the Milky Way and other galaxies, in order to study the abundance of carbon in these gas clouds; we received time in Cycle 12 and again in Cycle 15 to carry out these observations. During the summer of 2004, Joseph Gangestad ’06 worked on analysis of archived ultraviolet spectra taken with the IUE spacecraft.

Chemical Abundance Patterns in Galactic Planetary Nebulae
Dick Henry and I study the abundance patterns of important chemical elements in planetary nebulae. Here we are with colleague Jackie Milingo, now at Gettysburg College. We concentrated on the abundances of oxygen and nitrogen in “Type I” planetary nebulae – those that originate from the most massive parent stars – to see if there is systematic evidence of oxygen depletion, which is expected if a certain sequence of nuclear reactions has taken place in the star’s core. Dr. Steven Souza from our department joined in this effort. In the summer of 2007, Cliff Harvey (Worcester Polytech ’08; Keck Northeast Astronomy Consortium exchange student) worked on infrared spectra of two planetary nebulae in the halo of the Milky Way, obtained with the Infrared Spectrograph aboard the Spitzer Space Telescope. Such spectra allow us to measure the intensities of emission lines from ions not detectable with optical spectra, thereby aiding our determinations of the nebula’s chemical composition.

ELSA: A Package for Spectrum Analysis
In the summer of 2005 Jesse Levitt ’08 and Matthew Johnson (Wesleyan ’07; Keck Northeast Astronomy Consortium exchange student) worked on updating and automating a computer code written by Henry that calculates nebular conditions and abundances from measured spectroscopic data. In addition to being co-authors on the resulting paper, Jesse and Matt presented their work at a January 2006 meeting of the American Astronomical Society in Washington, D.C. and at an April 2006 symposium on planetary nebulae sponsored by the International Astronomical Union in Waikoloa, Hawaii. Here we are at the IAU. This program, called ELSA, is available to the community.

During the summer of 2006, two students, Jesse Levitt ’08 and Peter O’Malley (Haverford ’08; Keck Northeast Astronomy Consortium exchange student) upgraded ELSA. Here we are during a mini-conference in July 2006, when Dick Henry and Matt Johnson both came to campus. Jesse also worked on ELSA in the summer of 2007. And, here are ELSA folks at the 2007 KNAC Student Research Symposium held at Williams in September.

PAST PROJECTS
Integral Field Spectra of the Eskimo Nebula, NGC 2392
Dufour, Henry, and I, along with colleagues from the University of Texas, used the VIRUS-P integral field unit on the Macdonald 2.7-m telescope to study NGC 2392. The observations produce roughly 600 individual spectra across the face of NGC 2392. Matt Hosek ’12 has analyzed the data for his senior honors thesis.

The Sulfur Anomaly
Dick Henry and I have also been exploring the abundances of sulfur, argon and chlorine in planetary nebulae. In the stellar mass range that produces planetary nebulae, the abundances of these elements are not expected to be affected by the nuclear processing that drives changes in the carbon, helium, and nitrogen abundances during billions of years of stellar evolution. So by studying sulfur, argon and chlorine in planetary nebulae now, we have the exciting prospect of investigating the chemical evolution of the Galaxy over time, analogous to the use of the iron abundance to track Galactic chemical evolution in stars. In 1999 we received an NSF grant to pursue this work and made observations at Kitt Peak and Cerro Tololo, in which students participated. Jackie Milingo and Bruce Balick participated in portions of this work. We have discovered and are investigating an unexpected, systematic deficit in the sulfur abundance as the oxygen abundance increases; we have called this the “sulfur anomaly” – see the paper entitled “Sulfur, Chlorine and Argon Abundances in Planetary Nebulae. IV. Synthesis and the Sulfur Anomaly” below. Henry and several outside collaborators continue to study this puzzle, and have published a paper in the Astrophysical Journal.

Analysis of Newly recalibrated IUE Spectra to Study Carbon Abundances in Galactic Planetary Nebulae
Henry and I used newly recalibrated ultraviolet spectra from the IUE satellite, combined with optical observations from the 2.1 meter telescope at Kitt Peak, the 1.5 meter telescope at Cerro Tololo, and computer modeling to study a sample of planetary nebulae and the evolution of their central stars. We investigated production of carbon as a function of stellar mass and metallicity by stars that eventually produce planetary nebulae.

Imaging Haloes of Planetary Nebulae
During the 1990’s, with colleagues Prof. You-Hua Chu ( U. Illinois) and Dr. Ronald Downes (STScI), I obtained large-field CCD images with the Burrell-Schmidt telescope at Kitt Peak, and discovered halos around several planetaries. (Click here to see long-exposure images of M27, the Dumbbell Nebula or NGC 7293, the Helix Nebula.) The gossamer-like outer shells testify to the history of stellar wind and ejection of envelope material from the star all during its history. Most recently, the National Optical Astronomy Observatories issued a press release highlighting our images of Owl Nebula.

Other examples of student research participation:
During the academic year 2009-2010, Soraya Membreno ’12 worked with me to identify new planetary nebula candidates in the Sloan Digital Sky Survey archives.

In the summer of 2002, Matthew Hoffman ’04 and Mun Chan (Middlebury ’03; Keck Northeast Astronomy Consortium exchange student) accompanied me to KPNO to observe several planetary nebulae with the echelle spectrograph on the 4-meter telescope.

In the summer of 2001, Roger Cohen (Wesleyan ’03; Keck Northeast Astronomy Consortium exchange student) worked with me to calculate and assemble abundances of sulfur, argon and chlorine in 45 southern planetary nebulae. The resulting paper, on which Roger is a co-author, was published in the Astrophysical Journal Supplement (see below).

In the summer of 1999, Joel Iams ’01 and Hugh Crowl (Wesleyan ’00; Keck Northeast Astronomy Consortium exchange student) came to Kitt Peak National Observatory with me to observe with the 2.1 meter telescope. Iams and Crowl, along with Leila Zelnick ’00 worked with me to analyze the data.