In the backcountry of Greenwich, CT, narrow roads twist and turn and rise and fall through the woods. If you peer into the passing trees, you’ll see vestigial structures that at first might perplex you: stonewalls. They’re everywhere. Millions of rocks piled into neat walls between waist-high and chest-high, crisscrossing through the woods, bordering roads, forming fences around nothing but trees and fallen leaves. 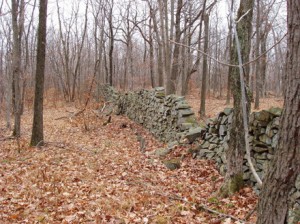 Built by farmers coping with the rocky Connecticut soil, the stonewalls in my hometown are remnants of settlements that no longer exist. Walking in the woods and passing stonewalls that lead nowhere, I often imagine the fields that used to exist where I stand, the cows or sheep that roamed, the crops that grew. But the stonewalls of Greenwich tell about more than human history; they also tell about geological history.

Approximately 24,000 years ago, long before farmers settled Greenwich, a glacier called the Wisconsin Ice Sheet covered half of North America. The glacier retreated about 16,000 years ago, and when it retreated it left behind debris called till, the very same rocks that are so abundant that farmers nicknamed them “New England Potatoes.” However, the Wisconsin Ice Sheet’s retreat impacted Greenwich in more ways than simply leaving behind materials for stonewalls. It also created Long Island Sound and inlets along the Connecticut coast, both of which have shaped my region’s history (Bell, 1985).

But before looking at how the glacier has affected my hometown, it’s necessary to put the Wisconsin Ice Sheet in context with the rest of Connecticut’s geological history. After all, neither Connecticut nor most of New England would exist had it not been for some significant events that occurred in earth’s deep history.

On a geological bedrock map, New England is a conglomeration of colorful bands running roughly north-south, indicating different types of rock (Figure 1). Its conglomerate nature is the result of continental collisions and breakups. In a system called Plate Tectonics, the heat in the earth’s mantle drives the crust to constantly move. Plates subduct (get pushed) under each other and new crust rises. As the crust moves, it pulls along continents with it, and over billions of years continents collide and separate. New England as we know it today was not part of the original “North American” continent, Laurentia, but rather formed from terranes – continental chunks – that collided with Laurentia’s east coast over millions of years. The main terrane that formed Connecticut is called the Gander Terrane. It collided with Laurentia approximately 360-416 million years ago, and it is believed to have come from Gondwana, a former supercontinent composed of South America and Africa (Raymo, 1989). 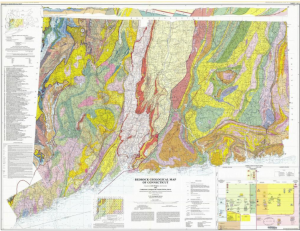 Over time, the land of Connecticut underwent many more collisions, including those that formed the supercontinent Pangaea. All during this time, Connecticut’s landscape was affected by water. One of the strongest geological forces, water erodes rocks. In other words, it breaks them down and carries along sediments or particles in rivers. The sediments are then deposited elsewhere in layers that will eventually form new rocks. Therefore, erosion and deposition have changed and sculpted Connecticut’s landscape since it was formed.

The last significant event in Connecticut’s geological history was glaciation. Around 10 million years ago, relatively recent in geological time, the planet’s climate began cooling due to changes in the earth’s orbit explained by something called the Milankovitch Theory. Glaciers formed and spread all the way from the North Pole to the edge of present-day Long Island. Over time, temperature fluctuations caused many cycles of glacial advances and retreats.

Glaciers are like very slow-moving rivers; they pick up sediments, rocks, sand and clay as they move forward. When they retreat, they leave behind the debris, called till, that they picked up while advancing. They leave the most till at their limit, or farthest point of expansion. The Wisconsin Ice Sheet’s limit was the area of Long Island (Figure 2), and the land known today as Long Island is actually a massive deposit of glacial debris called a moraine. 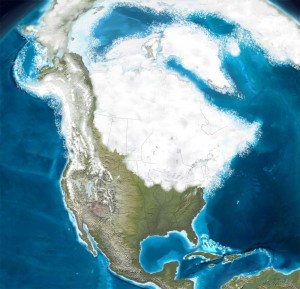 Figure 3. Limit of the Wisconsin Ice Sheet. Millions of years ago an ice sheet covered much of North America, stretching down to present-day Long Island. Its retreat created many of Connecticut’s geological features (source: www.americanroads.us).

The Wisconsin Ice Sheet’s retreat shaped Connecticut’s history in a few ways. First, it created Long Island, which shelters the coastline from storms, high winds, and big waves. Second, when it retreated the ice melted into the ocean and raised sea level. The sea flooded river gorges, helping create Connecticut’s distinctive “flooded coastline,” with many harbors. This combination of shelter and harbors has allowed Connecticut, including Greenwich, to be successful in many industries such as shipping and fishing (Bell, 1985).

As the Wisconsin Ice Sheet continued retreating, it left glacial till all over New England. Almost all the material that sits on top of Connecticut’s bedrock is from the glacier. It is often sandy and clayey, but varies from place to place. Eventually, this thick layer of debris was all that remained of the glacier. When settlers came to Connecticut, they coped with the debris by building stonewalls, but for a long time they did not know why the soil was so rocky (Flint, 1930).

Nowadays, when I’m walking in the woods and come across an abandoned stonewall, I can think back two hundred years to the settlers who built it, and then back 16,000 years to the retreating glacier that deposited its constituent rocks. The stonewalls in my town are omnipresent reminders of the changes that occur on both human and geological timescales.