As I drove north on State Highway 75, I found an Idaho that I was not expecting. I was on my way to Ketchum for a year of Nordic skiing and my cross-country drive had taken me from the green hills of New England, through the Midwest to Nebraska and the endless monotony of southern Wyoming. A brief spell of Rocky Mountains in northern Utah had reassured me I was still headed west, but as I crossed the border into Idaho I was completely disoriented. Road signs said I was close to Ketchum, but nothing about the surrounding environment could have told me that. I was on a massive plain of charred black rock. The road stretched straight out in front of me. Where were the mountains from the pictures? Where was I going to ski? Most importantly, where were all the people? 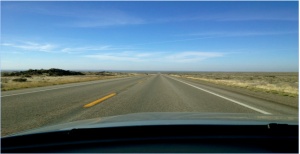 The view headed north toward Ketchum

But as I crested a small rise on the otherwise featureless landscape, I saw what I was looking for. Mountains rose out of the plain without warning or pretense; the rocky outcroppings faded then returned then faded again, giving way to chaparral flats and sagebrush; rugged outcroppings were interwoven with gentler hills; in my rearview, one world; in front of me, another. I was surprised by the Idaho I found because quite simply, Idaho is surprising.

Some of this mystery I could unravel by myself. I began to understand that Ketchum is situated at the transition between mountains and plains. To the north, the 12,000-foot peaks of the Sawtooth Mountains dominate the landscape but just outside the valley to the south, hot and dry summer air blows in temperatures well above 100 degrees, and you feel like you are living in the desert. This immediately struck me as an engaging geologic contrast. Why is there this drastic difference? And how did this happen? These questions led me perfectly to our assignment: what events or characteristics in the geological history of south central Idaho make this region so unique?

The Boulder Mountains, north of Ketchum

To start, the plains just south of Ketchum are like nothing I had ever seen growing up in New England. Flat, dry, and as I mentioned in passing, covered in black rock, the plains are part of the Snake River Plain, which forms a wide crescent stretching east-west along the southern Idaho border.

This region and the subsequent volcanic activity are the result of the north and south sides of the Plain being pulled apart. The plain is a fault-bounded basin, which means that faults, or fractures in the Earth’s crust, are on both the north and south sides of the plain and have been moving away from each other for the last 17 million years.[1] This faulting event is called “The Great Rift.”[2] The Great Rift, similar to the famous Rift Valley in East Africa, refers to the graben or depression that has formed between these two opposing forces.  The volcanic activity in the region has manifested itself as open fissures being drawn apart by tension cracks in the crust.[3] Any lava flow therefore seeps out of the ground instead of erupting from a conical peak. This explains the lack of typically shaped volcanoes and the widespread but random distribution of the lava. Again, because this region has an active and still forming geology, the rocks here are not that old: the basalt is mostly from the Quaternary Period, which started 2.5 million years ago.[4] The sedimentary rocks date back 5 million years to the Pliocene Epoch, or even as recently as the Holocene Epoch, which started only about 10,000 years ago.[5] So the black rocks that are visible from the side of the road and the sediments surrounding them? Those are basalt rocks cooled from the volcanic activity and sediments deposited by the faulting event that, in relative geologic terms, occurred recently. 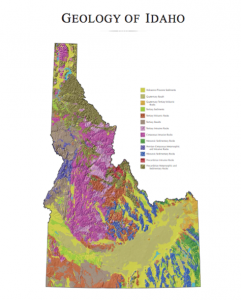 Stratigraphic Map of Idaho; the Snake River Plain is the wide crescent-shaped band of yellow; Ketchum is “central” (how central can anything be in a state shaped like Idaho?). It is right where the yellow meets the blue and orange section. Image courtesy of Idaho State University.

The mountains around Ketchum, however, tell a different story entirely. Starting at the northern limit of the Snake River Plain, the rocks are much older and of a much different composition than the plains. These mountains are actually a conglomeration of several mountain chains: to the west lie the Smoky Mountains and to the east, the Pioneers. To the north, the Boulders, and still farther north, the Sawtooths. These mountains are the product of several major influences. First, the cores of the mountains were formed by two groups of rocks. Dating furthest back in Earth’s history, early Proterozoic metamorphic rock (approximately two billion years old) makes up what Idaho State University’s Digital Atlas calls a “metamorphic core complex.”[6] This complex was made by the uplifting and recycling of metamorphic rock depending on the depth and fragility of its deposition.[7] Metamorphic rock is formed when any kind of rock changes its form (undergoes metamorphosis) under intense heat and pressure, so basically, the mountain formation was first triggered by two pieces of the Earth’s crust colliding; these pieces then pushed upward against each other, creating incredible pressure (changing the rock to metamorphic rock), and this newly formed rock created the base of the mountains.

The other notable component is Paleozoic sedimentary rock (approximately 400 million years old).[8] This part of the mountains has layered on top of the metamorphic core complex over a very long time frame; year by year, sediments have been eroded by the elements- primarily rivers and precipitation- and from these sediments, new layers of sedimentary rock have built up on top of the metamorphic rock. These two components establish the core of the mountains.

On top of this base, two mountain building events occurred much later in the history of the region that gave the mountains their recognizable shape. A granitic slab, called the Idaho Batholith, formed in the Cretaceous period (approximately 145 million years ago).[9] This batholith, which is essentially a large igneous intrusion in the Earth’s crust, intruded upon the metamorphic core complex as it cut down into south-central Idaho from the northwest.[10] The Digital Atlas of Idaho presents a good explanation with additional details and diagrams here. The second event was the formation of an arc of volcanoes called the Challis Volcanic Group in the Paleocene Epoch, about 65 million years ago.[11] A fault line developed in the crust, this time coming from the northeast, cutting across the batholith’s path and the impact of this was felt later in the mountain’s development, approximately 50 million years ago, when these volcanoes erupted.[12] These eruptions effectively “filled in” the mountains with volcanic rock, and helped give them their iconic shape that I had seen in all the pictures. 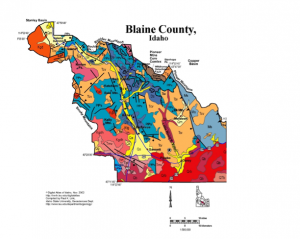 Ultimately, I found my way around last year. I found the ski trails and an apartment; the best free Wi-Fi and my favorite coffee shop. I found out the names of the mountains and that I liked driving too fast over the plains. I soon learned to love the state that had at first been so confusing. But my understanding of Idaho does not mean that it ever stops surprising me. This geological history hopefully uncovered some of those mysteries, but with volcanoes erupting and mountains eroding, I am sure there will always be more to learn.