When the FX TV show Archer broadcast its 5th season, fans of the show knew they were in for something different. Gone were the serial episodes split between the ISIS (the International Secret Intelligence Service and not the middle-eastern terrorist group ISIL) headquarters and exotic international locations. Instead, our heroes were on the run – fleeing US supervision and attempting to cash out a literal ton of cocaine. These changes brought a far more critical view of the spy-action drama Archer had parodied in prior seasons.

One possible method to understanding season 5’s message comes from Marxist philosopher Louis Althusser. In “Ideology and Ideological State Apparatuses,” Althusser claims that within the political sphere are multiple fighting groups. Each group promotes a different ideology that it believes everybody else should adopt. The key aspect of Althrusser’s theory is that this battle is cultural. As such, this struggle is reflected in our cultural creations. In the same way that groups fight to spread their ideology, movies and TV shows do too (Althusser, 146). If Althusser’s theory is correct, entertainment must be engaged in an ideological conflict.

Archer: Vice offers a particularly interesting window into this struggle because it is such a departure from the previous seasons’ format. If Althusser is correct, then the show critiques and battles the ideology preached by James Bond, Mission Impossible, and other similar movies in the spy-action genre. But the question still remains of what Archer subtly implies to its viewers, and how that is different from the ideology supplied by other shows.

The most prominent franchise of the spy-action genre is James Bond. Archer, and many other spy movies and TV shows, takes most of its tropes from this series. Specifically, the relationship between Sterling and Mallory is reminiscent of Bond and M’s. Archer’s surface aesthetic is much the same as Bond’s: they wear suits, are serial womanizers, and love a good drink. Both work for government agencies that send them all over the world for a multitude of reasons, the most prominent of which is assassination.

The defining trait of Bond and Archer is their nationalities. While American spies are common across all media, the “Bond-type” is a distinct trope with many characteristics of an stereotypical English gentleman. Archer, the show, takes the time to make sure that Sterling Archer emulates Bond but removes all traces of being British. Sterling lacks Bond’s sly demeanor, replacing it with a loud conspicuousness. Wry wit is replaced with overt sexual references and slapstick humor.   Bond’s powers of seduction come from a careful mental game combined with physical prowess. Archer gets with women by boasting about his job and all his achievements. Bond has a “martini, shaken not stirred.” Archer has whatever he can get his hands on. Even the two character’s theme songs reflect on their nationalities. Bond’s theme is an orchestral arrangement that plays as he walks triumphantly away from another vanquished enemy. Archer’s theme, “Danger Zone” by Kenny Loggins, literally describes him: Archer is a danger. The slick and posh versus the crude and common cleanly divides Bond from Archer in the came clichéd way that “American” and “British” are commonly differentiated. 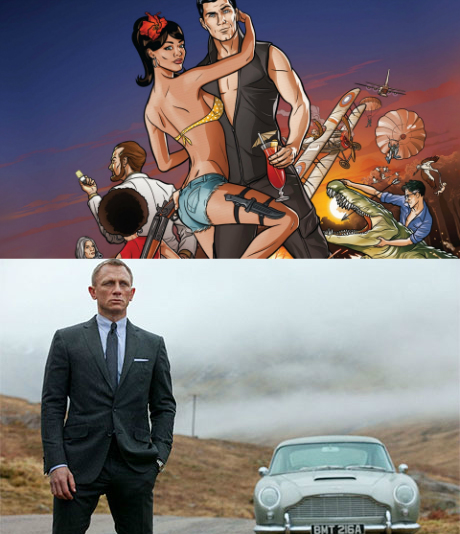 Archer, top, is chaotic and uses brute force while Bond, bottom, is calmer and more refined.

The attention to nationality changes the message of each Bond movie and the Archer TV show. In the modern Bond movie Skyfall, the climactic battle takes place on Bond’s hometown estate of Skyfall in Scotland. Bond, along with the groundskeeper Kincade and head of MI6 M, are on the run from a former MI6 agent named Raoul Silva. After retreating to Skyfall, the heroes set up a series of traps and devices in order to defend Skyfall against well-armed attackers. After a long battle, Bond is triumphant in killing Silva. Unfortunately, M is killed in the battle. She leaves a Union Jack emblazoned porcelain bulldog to Bond to remember her by( Skyfall).

The Althussarian interpretation of these events points back to nationality. Because Bond is so clearly identified with Britain, it follows that when Bond is defending his homestead he is also defending his homeland. The battle at Skyfall invokes a possible attack on England by terrorists. Furthering this interpretation is the knowledge that Silva was at one point an MI6 agent, implying that these attacks can come from the inside by people who aren’t loyal to Britain. But the way that Bond survived was by retreating to Skyfall, and using the resources it provided. The ideological interpretation here is that in order to be safe, individuals should be loyal to their nations. Skyfall, and Bond in general, promotes staunch nationalism.

Although Bond is British, and the movie does directly promote British nationalism, I believe the correct interpretation of the movie’s ideology is that it promotes nationalism in general. Most audiences viewing this movie do not identify with Britain, but they do identify with Bond. As a viewer, watching Bond defend his country will not inspire you to defend Britain as well. Instead, the ideology will rub off on you to defend whichever country you support. The distinction between Bond’s British identity and Archer’s American identity is only important in the contexts of the character’s stories. In terms of ideology, the concepts are generalized.

Archer argues against the type of nationalism promoted by Bond in Archer: Vice. The season begins with an attack by the FBI on ISIS, which results in the death of minor character Brett and the arrest of the main cast (“White Elephant”). This initial scene sets up the rest of the season: the disgraced ISIS agents attempting to sell cocaine in order to make some money before parting ways. I want to draw attention to two particular episodes in this season. First is “On the Carpet.” In this episode, we are introduced to Slater, the shady arms dealer. Slater gives Archer, Cyril, and Ray weapons in return for the cocaine they were attempting to smuggle, and tells them to fly south. Slater’s identity is revealed in “Arrival/Departure,” the final episode of the season. Slater is actually a CIA agent who was selling arms to a South American dictator to increase the CIA’s budget. The dictator could only pay for the weapons with cocaine, so the CIA needed people to sell the cocaine for them. The ISIS agents had actually been selling the CIA’s cocaine the whole time. Slater attempts to bring the ISIS agents to a CIA black site, but is disarmed. The episode ends with Mallory pulling a gun on the CIA agents and forcing them to reinstate ISIS.

As Archer’s defining trait, like Bond, is his nationality, we should look at these events through the national lens again. The initial crisis in the series is not an attack by a foreign group. The initial crisis is an attack by the US on an American – Archer. The breach of trust between country and individual doesn’t end there. The final reveal, that the CIA had used ISIS to fulfill their own goals, also demonstrates this point. Ideologically, Archer is implying that we should not trust our government. The government will only use you and abuse you, as they did to the ISIS agents. Furthermore, as indicated by Mallory, the only way to save yourself is to force the government to help you. That fact is reinforced by the attempted murder of the ISIS agents by the CIA once the ISIS agents had lost their utility. Archer counters the Bond style nationalism with a grim account of government secrecy and betrayal. Archer implores the viewer to not become a pawn in a much larger war.

Archer’s anti-nationalist agenda is unique and not a result of Archer’s satirical nature Austin Powers, another parody franchise that draws main elements from the James Bond, also advocates nationalism. Like both Bond and Sterling Archer, Austin Powers is known for his suits, nationality, and serial womanizing. But the ideology offered by Powers is in accordance with Bond, rather than Archer.

Take Austin Powers in Goldmember as a specific example. The major conflict is that Dr. Evil and Goldmember have commissioned a tractor beam (called “Preperation H”) that they will use to destroy the world. In the final confrontation of the movie, Austin pleads with Dr. Evil not to launch this rocket towards Earth. At the penultimate moment, Austin’s father reveals that Dr. Evil is actually Austin’s brother, which causes Dr. Evil to switch sides and fight off Goldmember to save the day.

There are a few key details that should be included to clarify Austin Powers’ ideology. First, the rocket is very clearly made by the Japanese – a whole scene in the movie is dedicated to infiltrating the factory where it was constructed. Second, Goldmember is Dutch, and a Belgian couple raised Dr. Evil. The enemy in this movie is foreigners, foreigners who want to destroy the world with foreign technology. And the way to stop this from happening is by uniting under a British identity. Austin Powers, while plainly parodying James Bond, agrees with Bond that nationalism and national identity is a solution to problems. Furthermore, it even identifies the specific way you should serve your country: accept the brotherhood of your nation and you will be protected from outsiders who mean you harm. Despite it’s nature as a parody, Austin Powers is on the same side as Bond in the cultural battle.

Austin Powers next to his car, “The Shagmobile”

For Althusser’s theory to be demonstrated, there must be an ideological war between movies within the same genre and of the same type. The traditional spy-action superpower, James Bond, has long argued that we should submit to our country and accept our place as a member of that particular society. Even spin off media, like Austin Powers, which parodies some of the central concepts and constructs in Bond, advocates the same position. But Archer, a firm fixture in the spy-action scene disagrees. It tells us to distrust our government and find our own path to safety. In doing so, it declares a cultural war on the other spy TV shows and movies.