Children’s movies seem very simple, so simple that some may be inclined to say that they are devoid of any hidden meaning. The cute aesthetics and simple plots make these movies attractive to children, but that doesn’t mean that there aren’t themes that underlay these movies. Even though kids might not consciously notice these hidden messages, it doesn’t mean they aren’t there. All stories work by presenting a real social conflict, masked to fit into the fictional universe of that story, and then presenting an imaginary solution to that conflict. In order for this to work, that social conflict needs to be applicable to our lives in some way. Films that are able to pull this off keep our attention because they are able to show us a solution to a problem that we deal with in our lives. Coraline is an example of this. This cute movie for kids is actually about being ignored and not fitting into the world around you. 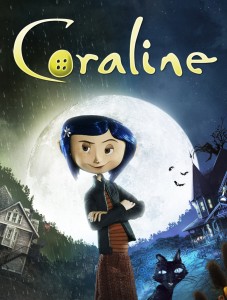 First let me summarize the film to you. Coraline is a stop motion film about a young girl who moves to a new home. Coraline is bored in her new home. She looks for some way to entertain herself, but her parents are busy, her neighbors are all dull people who can’t get her name right, and the one kid her age she meets, Wybie, is a creep that she catches watching her. Then she finds a small door in her living room. Beyond it lays a tunnel that leads to a world that looks very similar to her own, but everyone is focused on making her happy. And they all have creepy button eyes, but that’s beside the point.

Yup, there’s nothing unsettling about that at all

There she finds her other-mother and other-father, who actually pay attention to her. She spends the night there, having fun the entire time, and wakes up back in the regular world. Her mom tells her it was a just a dream and goes back to ignoring Coraline. That night, Coraline goes back to the door and finds the tunnel once again. This time she encounters many magical wonders, such as a garden in the shape of her face and an elaborate circus of trained mice. Then her other mother tells her that in order to stay, she has to sew buttons onto her eyes. Obviously, Coraline isn’t too thrilled about this. She tries to escape and everyone there deforms into ugly versions of themselves. 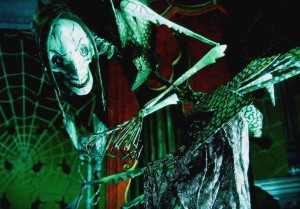 Should’ve seen this coming from the pretty creepy button eyes

Her other-mother is a terrifying spider-like monster that is controlling the whole world to try and keep her there. She eventually escapes, but she realizes her parents have been captured by the other-mother. She goes back into the other world to save her parents and after tricking the other-mother, she saves the day. When she returns to the real world, her parents don’t remember a thing. Coraline, with a new appreciation of her own world, seems happier and gets along with everyone she once despised.

Let’s take Coraline and first look at its most obvious theme. Coraline is a child who feels ignored. Throughout the beginning of the movie, she tries to make decisions for herself but never gets her way. She wants to spend time with her parents, but she is ignored. She says that she doesn’t like her dad’s cooking, but she’s ignored. She attempts to talk to her neighbors, but again she’s ignored. In fact, they all mistakenly call Coraline Caroline at some point, and when she corrects them, she’s repeatedly ignored. Coraline’s life is just a series of memories of being ignored by different people. 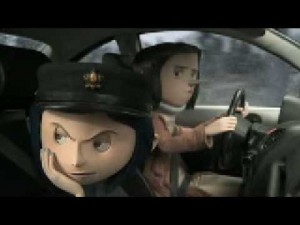 This is what it’s like to be a child. Children aren’t taken seriously, they can’t make decisions for themselves, and they need to listen to their elders. This can often make it feel to them that the world is ignoring them, that what they say doesn’t matter. Throughout the movie, Coraline is talked over by other characters. When Coraline comes back from the other world the first time, her mom doesn’t even seem to register what Coraline is saying. Coraline feels like she doesn’t belong in her own world and is frustrated by this. This is why Coraline finds the other world so attractive. This is a world where everything is literally about her. Everyone listens to her and respects her decisions, they let her decide what to eat for dinner. They even put on big shows just for her. She wants to stay there forever but in the end, it’s all a sham. They want to take away Coraline’s eyes and imprison her. Whenever Coraline goes into this other world, she is always wearing pajamas. This makes me believe that this other world is a constructed fantasy of Coraline’s. The struggle she undergoes with the other-mother is actually an internal struggle. She created the world she believed she wanted, but then it turned out to be too good to be true. This fantasy dreamland turned into a nightmare. This is Coraline realizing that a world where everything is about her just isn’t feasible. She is maturing. She’s giving up her childish view of the world and learning to appreciate how things actually are.  In the end, Coraline is seen working towards actually having conversations with her family and neighbors. Kids may feel as if the whole world is ignoring them, but that’s only because they’re looking at it the wrong way and they need to grow up. If you want to be heard by others, you have to make an effort to listen yourself.

Coraline tries to control people in the beginning of the film. She doesn’t do this on purpose, she simply wants to be entertained. However, being entertained means that her parents must drop whatever they’re doing and spend time with Coraline. She is selfish and doesn’t realize it. She encounters a fantasy where everything is about her, and she almost loses her eyes. Everything in Coraline is a puppet, but the puppets in the regular world are more human-like because they have actual eyes instead of creepy buttons. The eyes have been said to be the windows to the soul because they allow someone to express their emotions. They also show a person’s free will and intentionality; unlike buttons,  eyes can choose where to look unlike the buttons. Essentially, eyes are what makes someone a person. When Coraline constructs a world where she has everyone at her beck and call, she almost stops being a person. Being so self-absorbed that you believe that everything should be about you takes away your personhood. Our individuality arises from the fact that everyone else around us are different people with different wants and needs. If everyone around you wanted the same things that you wanted, would you still be an individual? This film is showing the dangers of narcissism. Coraline doesn’t realize that her parents have things that they need to do. Coraline’s mother was injured in the move, but Coraline doesn’t seem worried at all, she’s only worried that her mom can’t spend time with her. Coraline learns her lesson. She is seen serving others lemonade, an acknowledgement that the other people in her life also have wants and needs. In order to be happy as a person, you have to come to terms with the fact that you aren’t the most important thing to everyone in your life, they are also individuals with their own agendas. Accepting this will allow you to become a good person and avoid becoming a fake narcissistic doll.

Hidden inside Coraline, we can also see a commentary on the stop-motion industry. Stop motion is an old art form that require a lot of time and energy to get even a few seconds of film. In the Behind the Scenes for Coraline, they state that it took an animator a full work-week to get 90 seconds of film. With the rise of computer generated images, CGI, the stop-motion industry has gained some competition. CGI fills the exact same niche that stop-motion did. Throughout the beginning, Coraline is mistakenly called Caroline, a much more popular version of her name. Stop-motion can be mistaken for CGI, in fact I myself thought Coraline was an animated movie when I first watched it in 2009. It’s just not as popular as CGI so people will assume it is CGI unless shown evidence otherwise, such as a choppy frame rate. At one point, Coraline says “I’m way too old for dolls.”

This shows how stop motion is seen by people, it’s just playing with dolls like a kid would. Coraline is ignored throughout the film and feels like she doesn’t fit in. In this new world where CGI is becoming increasingly more popular, stop-motion needs to work to stay relevant. Coraline eventually learns to fit into the world around her by compromising and doing what others want to do as well, like letting her neighbor Bobinsky plant turnips in her garden. Stop motion has compromised in order to survive in the world of today. Instead of fighting against CGI, Coraline actually uses some CGI in conjunction with the real dolls in order to make certain scenes better.

Coraline is a film about not fitting into the world around you, but unlike many other films with a similar theme, the solution we’re given is that it is our fault. In order to find your place in the world, you need to work towards that. This film tells us that the fault lies in ourselves, not the world around us. Coraline felt as if everyone was against her and that they were ignoring her, but in fact she was just being a self-absorbed brat. We’ve all been there at some point in our lives. The only way to fix it is to accept the blame and grow up.