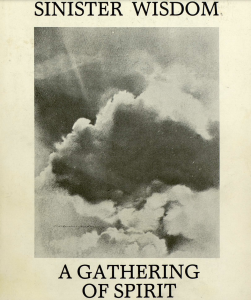 The cover of Sinister Wisdom‘s 1983 edition, A Gathering Spirit. The storm clouds were drawn in pencil by Rosemary Anderson in 1982.

Beth Brant was asked by Adrienne Rich and Michelle Cliff, editors of the lesbian feminist periodical Sinister Wisdom, to assemble its 1983 edition, in which they wanted to include solely North American Native women artists and writers. Brant—Mohawk essayist and poet—accepted, and prioritized elevating the voices of “women yet unheard” in A Gathering of Spirit. She searched for writers within the greater collective of Native women by writing to prison organizations, Native women’s health projects, and other networks to spread the word and collect stories previously silenced (6). Through this project, she established the power of the Native women collective that cultivates change through sharing stories.

Brant precedes the writers featured in this edition in her introduction titled “A Gathering of Spirit.” She calls upon the Women’s Liberation Movement to recognize its inherent flaws in excluding Native voices, a theme we see echoed throughout Native feminist poetry. She articulates her anger towards the “so-called women’s movement that forgets we exist,” that exploits Native women and their culture through “Romantic fantasies of ‘earth-mother’ and the Indian-woman-as victim” (7). One of the themes Brant draws upon that are echoed throughout the poems in this collection is the vital role that Native women play as the original “fire-tenders” and lifekeepers, whose hands “live and work in the present, while pulling on the past. It is impossible for us to not do both” (8). In her introduction, Brant initiates “The Ritual” of honoring Native women of the past, “The Gathering” of Native womens’ spirits, and “The Making” of a future that the collective of Indigenous women storytellers has been tending to all along (8). 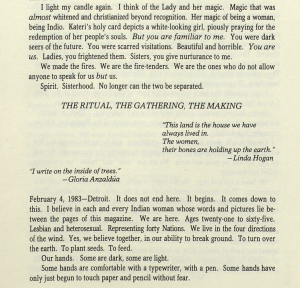 An excerpt from Beth Brant’s introduction to A Gathering of Spirit, including two quotes from Linda Hogan and Gloria Anzaldúa.