The Happy, the Sad, and the Open-Ended

UncategorizedOctober 15, 2016Comments Off on The Happy, the Sad, and the Open-Ended

Our relationship with nature has always been an uneasy one once we learned how to manipulate our surroundings to fit our needs. In a time when 150 to 200 species go extinct every day and just five countries produce half of the world’s 32 billion tons of carbon dioxide emissions from fossil fuels, now may be too late to start panicking. We are scrambling to stop and reverse the deleterious consequences of the Industrial Revolution, but at the same time, many of us are loath to relinquish our luxuries and exorbitant consumerism that continue to harm the environment. While blindly trying to find a solution, we support oil industries that spill millions of gallons of oil into the oceans and businesses that clear forests to provide more pasture land. What is it that allows us to make these choices that go against our moral obligations? Comfort, greed, and ignorance? Culture tells us to take a side, either with nature or against it, and to stick with it. But the path to understanding the problem starts with recognizing that there is no side to pick, an opposition to the dualist ideology we are constantly being fed.

In recent decades, the issue of sustainability and our relationship with nature has edged more and more into the public eye. Up until not so long ago, perhaps a few centuries in the 6,000-year history of civilization, we have shamelessly decimated natural resources, indifferently altered the Earth’s physiology, and killed those who refused to embrace “modernization”—all in the name of mechanical progress. As cities grew and everything else died, we began to pay more attention to our indelible footprints in the natural world. The media did not waste any time broadcasting the frightful crises of pollution, global warming, or depletion of vital resources, often spinning the issues into full-blown apocalyptic imaginations. Blockbusters like Dances with Wolves (1990), WALL-E (2008), and Avatar (2009) entranced audiences with depictions of the cataclysmic consequences that arise from the struggle between industrialization and the environment, all of which show a clear winner and loser.

Princess Mononoke is a 1997 Japanese animated film, written and directed by Hayao Miyazaki, that defies this binary solution. As the Forest Spirit restores life to the land, the opposing sides, Irontown and the forest gods, return to their respective realms after incurring heavy losses. Many forest gods have died to protect their forests, their bones and flesh consumed by the poison of the iron bullet. The resemblance of the metal stone in their bodies to the bezoar eerily represents the death of the gods as an antidote to technological barriers. On the other hand, although winning skirmishes, the entire village is destroyed as a result of decapitating the Deer god (also the Forest Spirit), whose manifestation oozes throughout the lands like melted iron ore. Both parties have lost, and Deer god or no Deer god, Mononoke’s world is split between industrial capitalism and militant environmentalism. 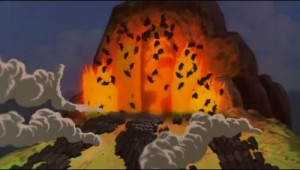 The extinction of the boar clan

It is no big surprise that many militant environmentalists are anti-capitalist. Capitalism runs on maximized profits. If Lady Eboshi, the leader of Irontown, has to kill every god in every forest to ensure the survival and prosperity of Irontown, you better bet she will. She is admired as a one who is not afraid of gods, for the drive for iron far outweighs the costs of destroying nature. Her people are a hodgepodge of workmen, prostitutes, and lepers, all taken under her wing for the sole purpose of producing iron for a profit. Every person is working for the continuation of Irontown, from the men collecting the ironsand, to the prostitutes working the bellows to the melt the iron, to the lepers inventing stronger, lighter rifles. The assembly line transcends and incorporates all the social groups. Just as Irontown’s singular purpose is to salvage all the iron in the forests no matter the cost, the forest inhabitants are pretty set on destroying the humans. The boar clan knowingly commits suicide when it charges at the town across a field planted with mines, and the ape tribe has resorted to eating human flesh, supposedly to gain human strength and fight back. Each is trying to survive by destroying the other. Looking at the film from today’s perspective, it is easy to blame Eboshi for being so uncaring towards the environment, but in the movie’s world, she is trying to support her town the only way she could, and her people’s adoration and trust in her reflect this.

So which side are you supposed to root for? It is ambiguous because both are just trying to ensure their own survival. (An evil that the film does warn against is pure greed and excessive consumerism that the emperor embodies when he demands the Deer god’s head in order to gain immortality. The emperor’s motivation differs from the town’s in that he wants more than he needs, perhaps lending a vision of what the capitalist Irontown will become in the future.) However, the movie did have to have an ending, and as in all stories, Mononoke attempts to coax the audience into believing that the movie’s resolution provides a viable solution to the crisis. The only problem is that it doesn’t do a very convincing job.

Let me first give a few examples of ideology’s workings in films so it may be easier to see how Mononoke differs. Terminator 3 (2003) is a generic killer robot movie about the rise of artificial intelligence who are the reason for the human apocalypse. The plot involves two robots from the future: one is outdated and male, the other is “smart” and female. Throughout the entire movie, the audience cheered as the Terminator bashed away at the surprisingly hardy Terminatrix’s head; after all, the male robot is good and the female robot is evil. Viewers breathed a sigh of relief as the Terminator finally obliterated the Terminatrix, which concluded the film. It was then easy to forget that, while the direct threat was gone, the protagonists actually failed to stop the apocalypse. Saving the world was the main issue and the movie glides over the abortive mission with a victorious Terminator blowing up the Terminatrix by sticking a fuel cell down her throat…which exemplifies the underlying ideology that the movies actually focuses on: the patriarchy must be kept alive and well even when obsolete. If this notion of putting women back in their place through rape were clear in the film, it would have had a hard time getting greenlighted. The ideological plot that the movie stresses with scene after scene of the two robots fighting has a solution, but it is one that no one in the right mind would endorse in the real world, only through the fictitious characters and events in the movie.

Avatar (2009), unlike Princess Mononoke, portrays humans as ruthless militants with no compassion for nature. Set in the year 2154, humans have even more advanced guns, tanks, and dreams, and it seems like a pitiful joke for the Na’vi tribe to be expected to defend themselves. But the Na’vi don’t just defend themselves, they expel a whole establishment of leaders, soldiers, and scientists off their planet. This ending runs counter to the entire history of colonization and basically every White encounter with indigenous people. So how do the Na’vi do it? The indigenous animals suddenly decide to fight the humans in a collective effort, as if understanding the direness that humans impose, giving the indigenous people a fantastical boost. Hammerhead Titanothere herds stampede through the forest like tanks and airborne predators serve as airpower for the Na’vi. The movie significantly amplifies the strength of the bow and arrow just enough to overcome gun and steel. Avatar achieves a happy ending by giving the indigenous people an imaginary advantage to rival the White people’s technology, but the pretense that indigenous tribes can win is, well, just that—imaginary. 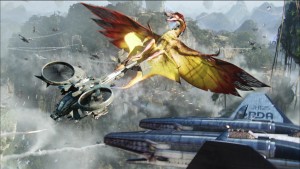 Dragons to the rescue!

Terminator 3 and Avatar affirm that stories work by providing imaginary solutions to real crises, but Mononoke specifies that the lack of a political fantasy reveals the true nature of environmental ideology of the real world. The town and the forest’s goals exactly align with the destruction of each other, and that is where the plot fails to offer a believable solution. In the end, idyllic greenery miraculously returns to the land, the protagonist’s curse is lifted, and everyone is optimistic that things will be different after a near-apocalypse. The land has undergone a dramatic transformation of death and rebirth, marked by the reappearance of kodama, spirits that signify a healthy forest. The casual viewer (as I was when I first watched the movie a few years ago), at best, might turn off the TV with a sense of emotional satisfaction and confidence in the industrial world’s peace treaty with nature. But upon deeper analysis, it does not take much to realize the plot is not offering a solution at all—fantastical or not. After the ultimate battle, both sides are diminished, and now they are supposed to coexist agreeably. Miyazaki seemed to recognize that this ideal was a fantasy, ending the film with Lady Eboshi, simply declaring: “We’ll start over again. We’ll build a good village.” But what does “a good village” mean? Surely a Muromachi-era town dependent on ironsand and thus deforestation isn’t supposed to suddenly start innovating ways to survive and grow without exploiting nature. In human history, nature’s loss was imperative to technological advancement in the first place, so only after we reach the point of sustainability can we retroactively try to fix the damage that we caused to get there. In the movie’s own terms, it is inevitable that Irontown and the forest inhabitants will clash again, but that is left open-ended. 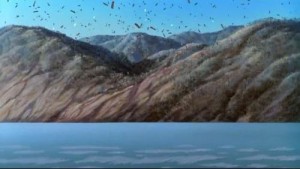 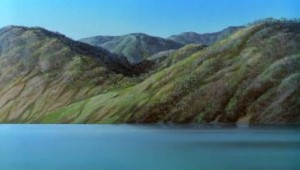 Whereas Terminator 3 and Avatar offer emotional release, Princess Mononoke refuses to resolve the environmental issue with a cop-out such as killing Eboshi. Instead, the false hope that closes the film offers viewers an illusory view. At the same time, the naïve easiness of it all and cursory wrap-up indicate a deeper discovery which allows the viewers to realize the fiction in the ideology. Even the imaginary world does not provide a solution. Miyazaki’s unsatisfactory ending reflects the political messiness of the real world and even the hopelessness that accompanies it. Our catastrophic relationship with the environment throughout history is not explicitly shown in Mononoke’s “happy ending,” but it is hidden beneath such a superficial optimism that people understand the film provides a fantasy which is at odds with the circumstances of the real world. Through the viewpoint of an ambivalent protagonist, whose undertaking is to journey to the west and “see with eyes unclouded,” Miyazaki portrays a crisis that cannot be solved by simply creating a winner or loser. Even though the film criticizes excessive consumerism, a large portion of the world does not participate in this kind of lifestyle; if anything, they are not getting enough to consume. It is not possible to condemn these people who live much like the Irontown folks do. Unlike other environmentally-focused films, Mononoke is not supposed to justify industrialism’s dominance over nature or inspire penitence for all the cruelty against our environment, but to delineate the current situation through the loss and destruction of both parties.

Note: Some ideas in this essay come from a conversation I had with Professor Christian Thorne on October 13, 2016.

Mononoke images were screenshot from movie.