UncategorizedDecember 15, 2016Comments Off on Little Charlie Bucket, Our Savior

If we look beyond the colorful fields of edible grass and chocolate rivers in Willy Wonka’s chocolate factory, we might find a something a bit less sweet to the taste. In the well-known version of the story, Charlie and the Chocolate Factory (2005), Charlie Bucket, an impoverished, yet kind-hearted English boy, finds the final golden ticket for a competition to win an unknown prize from Willy Wonka himself. Freddie Highmore, who plays Charlie, does a terrific job collecting a fan club for Charlie, the underdog, as he gets closer and closer to winning. But in Tim Burton’s rendition of Charlie and the Chocolate Factory, Charlie represents much more than a lucky little English boy. In fact, the plotline that we all know has a racial script that the movie simultaneously follows that establishes a racial hierarchy. 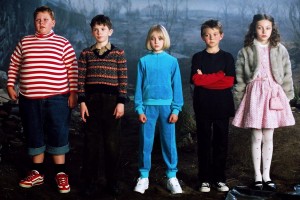 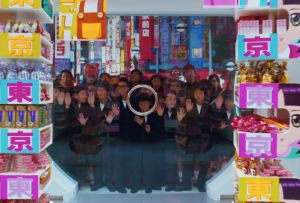 The racial script begins most obviously with the abundance of white actors in the movie. Upon Willy Wonka’s announcement of the five hidden golden tickets, the movie cuts to a clip of Japanese children scrambling to buy as many bars as possible in a store in Tokyo, and then to a clip of Moroccans bartering for Willa Wonka bars in a marketplace. But despite the appearance of a worldwide sale of chocolate bars, the winners of the golden tickets include two British children, Charlie Bucket and Veruca Salt, two American children, Violet Beauregarde and Mike Teavee, and one German child, Augustus Gloop, all white. So, here we have a white world-renowned factory owner, with five white kids and their white parents (or grandparents) as the main cast in the movie. By choosing children from Western Europe and America, and omitting minority groups, the movie seems to want us to associate whiteness with success and dominant mainstream society. This serves to make anyone outside this category become estranged to the audience, as we will see with the Oompa Loompas. 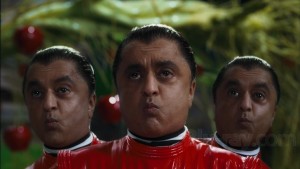 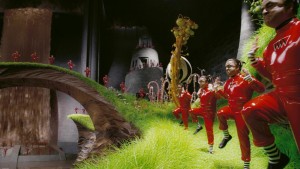 With the exception of a few very brief on-screen appearances, the movie’s most prevalent non-white characters are the Oompa Loompas, Willy Wonka’s little factory workers. Fifteen years prior to the movie’s present day, Willy Wonka fired all of his workers, Charlie’s Grandpa Joe explains, and shut his factory off from the world. In his seclusion, Willy Wonka explored the world looking for “exotic new flavors for candy” and came across Loompaland, where he found a population of small, hard-working, dark-skinned, Loompaland natives who would become his new factory workers. Willy Wonka extends an offer to the Chief Oompa Loompa: their labor in return for cocoa beans, the Oompa Loompa’s most prized possession. After exchanging a few hand signs and grunts, the Chief agrees to bring his people to work for Willy Wonka in his factory. I refer to Oompa Loompas collectively as an entire population, but perhaps the most interesting part of this population is that they are all played by the same actor, Deep Roy, who was born in Kenya to Indian parents, and whose height of 4’4” reflects the miniature physique of the Oompa Loompas in the movie. So let’s get this straight; the Oompa Loompas are identical, tiny, dark-skinned, foreign, large in numbers, receive no monetary pay, and work for a white guy. Does the movie mean for us to align the “race” of Oompa Loompas with Latinos?  In the historical context of the original book, the immigration of Latino immigrants, especially in England, certainly is not relevant, but I point out the similarities in the context of present-day associations, keeping in mind the movie was made in 2005. They share characteristics with the unfortunate present-day stereotype of Latino immigrants: petite, tan, hard-working, and replacing white workers for lower pay. The Oompa Loompas wear identical shiny, metallic suits with antenna-like hairstyles, a costume that strongly resembles that of aliens, or should I say immigrants?

Oompa Loompa’s dancing in a ceremonial gathering. The dancing Oompa Loompa wears a cocoa bean on his head. 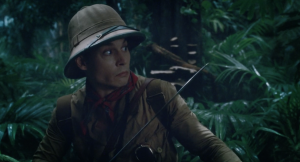 Alternatively, the movies intends for us to align Oompa Loompas with Central African tribal culture in the Congo Rainforest. In one clip the Oompa Loompas dance in grass skirts and other ceremonial adornment. Uncoincidentally, Roald Dahl’s original version of the book (1964) describes Willy Wonka’s factory workers as “3,000 amiable black pygmies… imported by Mr. Willy Wonka from ‘the very deepest and darkest part of the African jungle’”(Treglown). Associations with the Pygmy People of Central Africa are uncanny; they are little people, as are the Oompa Loompas in the movie, as is Roy Deep in real life. This also brings to mind the history of European colonization of Africa. The movie connects the Oompa Loompas, whose land was exploited by a white explorer (Willy Wonka), and whose labor is now vital to the production of the factory’s goods, to the history of the exploitation of African land and slaves. Despite the grim connections, it actually turns out that it does not matter whether the movie aligns the Oompa Loompas with Latinos, African people, or another non-white group, because the simple fact that they are not white is good enough. According to the movie, the anything-but-white race sits lower on the racial hierarchy. They work for the the white businessman, the white golden ticket holders.

But then the racial script gets even more complicated when sub-hierarchies of race emerge. In order to see this, I must introduce Richard Dyer’s The Matter of Whiteness. Whiteness, he says, is defined by the ability “to transcend” (Dyer 17) the physical body. It is embodied by “its energy, enterprise, discipline and spiritual elevation” (Dyer 21). He even compares whiteness to Christian culture by way of the “link between the body and spirit” (Dyer 18). Contrastingly, blackness confines people to their physical bodies, and we see this in Charlie and the Chocolate Factory most conspicuously in the Oompa Loompa’s musical performances, which makes up the bulk of their screen time. We must look closely, however, to notice a sub-hierarchy within the cast of white characters. As Willy Wonka gives a tour of his chocolate factory, each child faces an obstacle that ultimately requires physical repair. For example, the demise of Augustus Gloop, the fat, candy-loving German boy, occurs when he falls into the river of chocolate and gets sucked up by a pipe. He exits the factory with his body covered head to toe in brown chocolate. Violet Beauregarde, who takes immense pride in her accomplishments, specifically her gum-chewing championship, faces her downfall when she chews gum that Willy Wonka has not yet perfected; she turns violet-colored and blows up into a huge blueberry, and is then brought to the juicer. As she exits the factory, we see her new violet, ultra-flexible body twisting in unnatural ways. Spoiled Veruca Salt decides she wants a squirrel from the factory (Willy Wonka employs squirrels to crack open nuts). But when the unhappy squirrels deem her a “bad nut”, they throw her down the garbage chute to the incinerator. She leaves the factory covered in garbage. Finally, Mike Teavee shrinks to the size of a human hand when he misuses one of Willy Wonka’s new inventions, a chocolate bar teleporter. He is then taken to the taffy stretcher to be elongated. So there you have it, a picture of white people, transforming into discolored, deformed beings and in the process, losing their whiteness. Not only have Violet and Augustus literally changed skin color, all of them become confined to their bodies in some very conspicuous way, which implies blackness. Willy Wonka, simply by leading a tour of his factory, has rooted out the “bad nuts”, the children who, despite their whiteness, are deemed unworthy of victory. That leaves us with Charlie, the sweet, harmless, British boy who, by virtue of everyone else’s forfeits, has won the grand prize: heirdom to the factory. By emphasizing the children’s physical discolorations and deformities, the movie confines them to their bodies and essentially de-whitifies them, placing them lower down on the movie’s racial hierarchy. 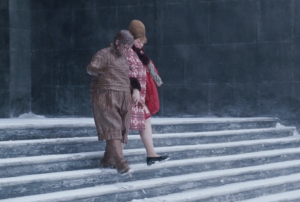 Augustus and his mother, leaving the factory. 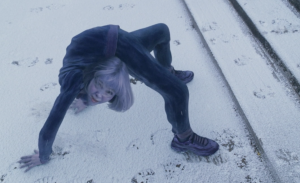 Violet and her discolored body.

So the children lose their status as white people. But what makes Charlie superior and, therefore, deserving of the grand prize? The movie’s central plot calls for an heir to run the chocolate factory, and it cuts out the entire population of the world except for Americans, Germans and the English. Even then, the story sends an underlying message to keep the power within British people. The British boy is next in line to power (note that the snobby British girl loses out, which is the movie’s way of placing a greater value on male, working class Brits). That Charlie is British and of the working class cannot be reason enough to declare his superiority though, so what else does the movie offer as key components to the ideal victor? 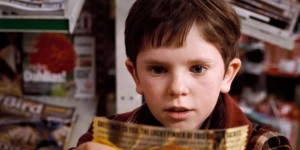 Charlie’s virtuous ways align him with Christian morals. He possesses generosity, as seen when he shares his singular birthday chocolate bar with all six family members. When Charlie asks Violet why not start a new piece of gum, she responds “because then I wouldn’t be a champion, I’d be a loser like you” to which Charlie barely reacts, showing his composure and forgiveness. Contrastingly, each of the four real losers exhibits one of the seven deadly sins: gluttonous Augustus, prideful Violet, greedy Veruca, and raging Mike, who seems to always be mad. Kara Keeling and Scott Pollard write that not just the four children, but everyone in the world except for the Buckets have a strange obsession and desire for food, which accurately speaks to the sinfulness and gluttony of the world (Critical Approaches to Food in Children’s Literature). Charlie’s Christian whiteness surpasses not only that of the immoral children, but that of the gluttonous, lustful world around him. 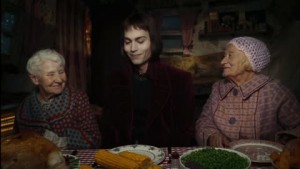 It turns out that the movie’s take on whiteness goes even beyond Christian morals. In fact, the movie seems to want us to associate ideal whiteness with heterosexuality and the traditional family unit (father, mother, and child). Willy Wonka’s unusual appearance, made up of a top hat, velvet coat, bug-eye goggles, and an effeminate hair style, combined with his lack of family, and questionable sexuality sets him apart from mainstream society. When Violet’s tall, thin, blond mother conspicuously flirts with Willy Wonka, he stares at her blankly, clearly either not interested or not able to pick up on the social queue. Something about him feels  uncomfortable; maybe it is his eccentric dress, his social awkwardness, or his queerness. Stuart Aitken writes in Composing identities: Films, families and racism about Heidi Nast’s argument “that “race” is inherent in modern conceptions of heterosexuality that constructs a normative family quadrad comprising Mother, Father, Son, and the Repressed (the Wild or Bestial). The Mother-Father-Son triad is encoded as white while the repressed Bestial is colored”. This applies to the Buckets, a family whose lack of financial stability is made up for in love, support, and an overall attractiveness as a family unit. Though he is not “colored”, Willy Wonka fills the role of the “bestial”. He lacks social skills, heterosexuality, and a family. But when Charlie, the superior white character wins the contest, he adopts Willy Wonka into his stable family and begins a process of “fixing” Willy Wonka’s queerness. The movie, then, tells us that even though Willy Wonka is white, he is not ideally white and so he must strive to be more like Charlie and his family, which he ultimately does in the final family dinner scene. We end with a movie that defines a racial hierarchy that, as it turns out, does not depend purely on appearance. Rather, Rather, Charlie and the Chocolate Factory establishes a vision of ideal whiteness embodied by Charlie Bucket, our little Christian white savior.