Give me your tired, your poor, Your Americanized masses

UncategorizedOctober 16, 2016Comments Off on Give me your tired, your poor, Your Americanized masses

According to Rotten Tomatoes’ critical consensus, DreamWorks Animation’s 2015 animated film “Home” is “Colorful, silly, and utterly benign… a passable diversion” (Home(2015)). The premise of the movie centers around a semi-purple, six-legged alien race called the Boov as they flee across the universe and resettle on Earth to escape their enemy the Borg, along the way displacing the planet’s human residents. Oh, a sincere, socially ostracized young Boov, sees his species’ relocation as the opportunity to finally win over his fellow Boov and make friends. In his excitement to invite his “best friend Kyle” to a welcome party, Oh nearly alerts the Borg to the Boov’s whereabouts and so he is forced into hiding where he meets Tip, a young human who is searching for her mother. By the end of the film, after a series of misadventures, Tip, Oh, and the Boov reach their fairly classic DreamWorks endings: Tip is reunited with her mom, Oh makes countless friends, and the Boov and humans coexist peacefully. Everyone is happy. It is a “colorful, silly, and utterly benign” ending. At least until it is viewed against a modern political backdrop. When analyzed in the context of recent backlash against immigration and refugees in the United States, “Home“, 2015’s family friendly DreamWorks Animation movie, begins to embody a strong xenophobic political ideology aimed directly at the most impressionable members of our society. 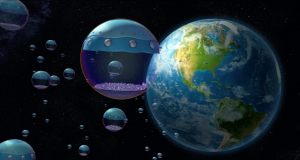 The Boov moving to Earth

First, let’s address the idea of the Boov as refugees. Homeland Security defines a refugee as “a person who is unable or unwilling to return to his or her country of nationality because of persecution or a well-founded fear of persecution on account of race, religion, nationality, membership in a particular social group, or political opinion” (Martin). The Boov fit this definition to a T. The catalyst of the entire movie is that the Boov are being relentlessly hunted by the Gorg. When the viewer is introduced to this concept, the film writers give no reason for the animosity between the two species, nor do they provide an adequate description of any cultural, theological, ideological, etc. differences. Because of this void of information, the viewers derive the aliens’ shared fundamental distrust of each other from the only difference they have been able to observe: their species. The filmmakers have crafted, through omission of information, a scenario in which one group appears to have fled their home to escape persecution from another. As a matter of semantics, though the definition doesn’t include species (because the policy makers were only addressing human conflicts), in a the Official Trailer #1, DreamWorks first identifies the Boov as a “nomadic race,” bringing them linguistically under the arch of the definition. Additionally, the descriptor further intertwines the two groups by assigning to the Boov the qualification of nomadism, which is characterized by continuous movement from place to place and is a core trait of refugees. 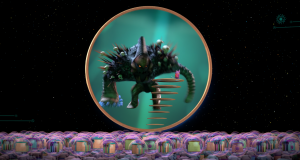 Beyond this textbook definition, however, the Boov are decidedly outsiders to “American” society. The first spoken line of the movie makes this clear. As the Boov’s blue mothership comes into view and Oh’s narration begins, we hear “Today is best day ever!” To start the movie with a snippet of monologue spoken in imperfect English sets the tone of “otherness.” English is not their first language, therefore they are foreign. In addition to this, the Boov consistently show a thorough misunderstanding of both frivolous and essential elements of American life. Within the first six minutes of the movie, Oh cooks a cookbook, decorates with toilet paper, and brushes his teeth with a toilet bowl cleaner. Captain Smek mistakes footballs (a staple of american sports culture) for fruit, tires for headbands and evening wear (but that one’s a euphemism for an extra layer of fat around the waist), oranges for shoes, a vacuum for a horse, etc. Besides simple misconceptions about objects used in daily life, the Boov believe they “are best at deciding what is useful. And what is not,” so when they begin their settlement, they create enormous floating balls of everything they deem “useless,” ranging from toilets and chairs, to bikes and grand pianos. 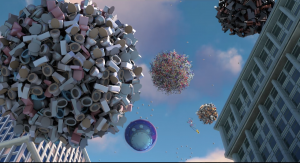 Captain Smek demonstrating the use of footballs 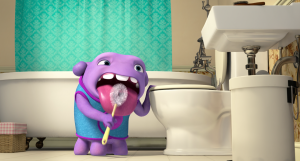 Now all that’s left to determine is which group of refugees are the Boov supposed to represent. The Boov show important societal variances from Americans that indicate Eastern origins. They exhibit none of the stereotypical American friendly and outgoing personality traits. They are instead more reserved, a trait often assigned to Middle Eastern and Asian cultures, indicating that the Boov are a reference to Syrian refugees.

So hopefully you’re convinced that the Boov represent Syrian refugees and are outsiders in American society. But featuring characters from different cultures and backgrounds hardly makes a movie xenophobic. In fact, it really only indicates inclusivity. So how did the creators of “Home” turn inclusivity into xenophobia? They did it in three steps:

Firstly, the movie begins by playing on American ideals to build a pathos against refugees. While the initial trailer defined the Boov as a “nomadic race,” Oh’s own definition of his people is that the Boov are the “Best species ever at running away!” To an American audience, running away means defeat and defeat means weakness. Weakness is a deplorable quality to many Americans. The nation is locked in a constant struggle to prove itself to be the strongest and the fiercest in the world. The average movie goer would find it incredibly difficult to empathise with characters who consider vulnerability a trait of which they should be proud. And the Boov certainly take pride in it. Captain Smek, the commander of the Boov, lists his admirable leadership skills as “cowering, running, and pulling a skedaddle.”  In American culture, there are heavy, negative connotations associated with these words and ideas because they run in direct opposition of American heroism. The film writers craft the Boov’s dialogue so that these negative connotations are in turn transferred onto the act of fleeing violence and danger. If the Boov had not fled their home planet they would have died but the gravity of that is undermined by the negative pathos of the language of the film. The viewer is instinctively led to look down on the Boov, and, subconsciously, the refugees they mirror. 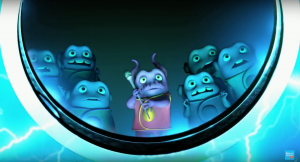 Secondly, the film plays into two American anti-immigrant and refugee fears. A 2013 Stanford Business School article reports that, “one recent survey found 70% of Americans thought allowing more immigrants would make it harder to find jobs”(Zacharia). This scenario is quite literally the first thing you see happen in the movie. Well, more accurately, before the movie even starts. Within the first 30 seconds of the opening credits, the classic DreamWorks boy on the moon is sucked up and replaced with a Boov. The first representation of the refugee aliens feeds off of a very real fear in the modern American psyche. This singular abduction is amplified a thousand fold when the Boov descend on the planet, remove all the people, and relegate them to a false suburbia in Australia. This drives home the point that when outsiders come, they have the potential to significantly disrupt American way of life. 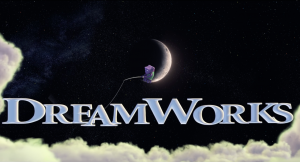 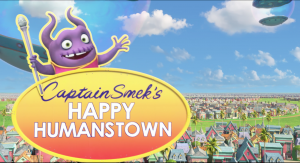 The looming threat of the Gorg invasion gets to the second fear. A month and a half before the movie came out, abcNews published a story that opened with “Top U.S. counterterrorism officials say they worry a potential terrorist could be hiding among refugees who are looking to come to the United States after escaping the brutal war in Syria”(Fishel). There is a substantial fear felt across the country that as the government invites in refugees, it also opens the door to the terrorists the refugees are fleeing. This sentiment has been growing for years and continues on today. Presidential hopeful Donald Trump bolstered his campaign by engaging with this fear and proposing a ban on all muslims and refugees coming into the United States. The movie also capitalizes on this when Oh mistakenly notifies the Gorg about the Boov’s location, nearly resulting in the destruction of the planet. This storyline magnifies the audience’s investment in the plot of the film because it reinforces fears that are prevalent in their own lives. 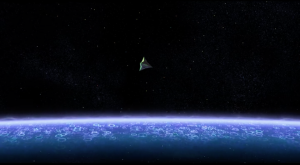 The e-vite approaching the Gorg mothership

The film hammers the final nail into the proverbial, xenophobic coffin with the concluding message of the film: you are not welcome here unless you adopt our ways. This idea develops through the relationship between Tip and Oh. When we first see Tip, she is watching a video of mom playing in the snow. As the camera pans out, you see tacked on the walls drawings that say DIE BOOV, small Boov cutouts with pins sticking out of their hearts, and a dartboard with a Boov face covered in darts. She thoroughly despises them for ripping her family apart but by the end of the movie, Oh is her best friend. What spurred this transition? The Boovs learned how to be American. 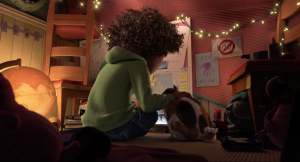 Throughout the journey, Tip instructs Oh about Western culture. She explains that animals don’t need to serve a purpose outside of companionship, elements of gender when she kicks him out of the women’s restroom, and the general idea of holding on to hope and persevering through hardship, rather than giving up. But for all that she’s teaching Oh, Tip never bothers to learn anything about his culture. She consistently brushes off all of his attempts to share. Perhaps the most outright the movie comes in revealing this discrepancy is at a moment when Oh tries to play Tip Boov music and she immediately rejects it and puts on Western music. She tells him “If you want humans to not hate you, you could start by liking some of our stuff.” This is a blatant revelation that the Boov, and therefore refugees, will only find a place in society if they abandon their culture and embrace America’s. Tip serves as a model for transition. Her family immigrated from Barbados and she learned to share American ideals. Once she learned how to “fit in” with the American kids, she was “finally happy.” In the end, the refugee Boov must change their entire way of life to fit into American society. 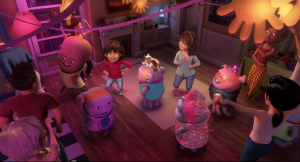 The Boov are dancing at a party with friends, three things they are never supposed to do

This is not a new theme in entertainment but what makes it so shocking is its source. “Home” was carefully and meticulously crafted by DreamWorks Animation SKG inc. Jeffrey Katzenberg, president of DreamWorks Animation, is the largest Democratic donor and fundraiser in Hollywood and anyone in the film industry could tell you that his studio reflects that party’s liberal beliefs (Daunt). Heck, anyone who’d watched a Dreamworks movie could probably tell you that. They tend to challenge societal prejudices about marginalized groups and incorporate messages of acceptance. “Home” is a sharp and utterly abrupt departure from that mold. The xenophobic ideology of the film is so unexpected and deeply buried under the guise of inclusivity that it makes liberally inclined people agree to cultural homogenization.