Brainwashing: One Disney Film at a Time

UncategorizedOctober 15, 2016Comments Off on Brainwashing: One Disney Film at a Time

A fragile, gentle princess cries endlessly for help from a distance in hope that someone will save her from the villain keeping her hostage. News then travels to the princess’ hometown informing residents that she’s been caught; and as they get ready to attack the villain head-on, in swoops a robust, tall prince to save the day. Through clever tact and superhuman strength, the prince rescues the princess and wins her love. They get married and live happily ever after.

This simplistic mold has been the primary archetypal plot for Disney animated films since the debut of Snow White in 1937. Disney “princess films” have always followed the same model: a beautiful, yet helpless princess saved by the manly, chiseled-face prince. Children and adults alike have seen this classic plot repeated through countless movies such as Snow White and Cinderella. But are audience members aware of the model’s effect and relayed message? It’s seemingly obvious that these films emphasize gender norms and traditional patriarchal beliefs, and, although Disney has recently drawn female main characters as autonomous and strong, in films such as Tangled and Frozen, the stereotypes seen in the classics remain concealed in other forms. And if we know how these movies carry out their plots, why do we keep watching them?

Though it all began with Snow White and Cinderella, the latent sexism and hegemonic masculinity in the company’s films were all-encompassing in Beauty and the Beast (Disney’s fifth princess film). The male main character in this film is a man turned beast, and the destined princess lived to care for her father in a town where she is expected to aspire to marriage. Aside from the beast, Disney also presents us to the male figure Gaston, an egotistical hunter who’s in love with Belle, the “housewife” turned princess. And despite his goal to win her love, Gaston assumes that he already has her heart for there is no other man like him in town.

Through characters like Gaston, Beauty and the Beast slaps you in the face with its almost overwhelming display of hegemonic masculinity. Gaston’s character is sketched to ensure that he seems as “manly” as possible–his biceps are huge, his shirt is stretched by his immense muscles, and he has sharp, chiseled facial features that compliment his menacing and patronizing smirk, the constant reminder to others of his ultimate superiority. Furthermore, Disney artists made sure Gatson would appear significantly larger than the other characters in the film. Simply put, everything about Gaston says, “I’ll always be better than you.” As if his physical appearance was not enough to emphasize his superiority and intimidating influence in the small town, Disney gives Gaston an entire musical number in which the villagers around him gleefully sing, “No one’s slick as Gaston. No one’s quick as Gaston. No one’s neck’s as incredibly thick as Gaston. For there’s no man in town half as manly. Perfect, a pure paragon. You can ask any Tom, Dick or Stanley. And they’ll tell you whose team they’d prefer to be on” (Beauty and the Beast). Glorification for his strength and looks is a common occurrence. Disney even gives him, what seems like, superhuman strength. In one scene he bullies the short, ugly men in a bar to remind both the townsmen and the audience that he is a force to be reckoned with. Further still, in this same scene, background women admire Gaston and deem him attractive. Finally, having already demonstrated narcissism and an enormous ego in the tavern scene, Gaston also proves to be sexist, displaying the traditional belief that women should consider neither autonomy nor education important. His attitudes are made clear when he throws Belle’s book to the mud,  and tells her to focus on the more significant things in life, such as himself. If nothing else, Gaston performs one role perfectly with his exaggerated physical strength, narcissism, aggression, impulsivity, and brash sexism –the embodiment of hegemonic masculinity.

The large inability to sight the subtle hyper-masculine qualities present in these types of characters has grown out of their normalization in both film and society. The details are clouded by other cinematographic aspects of the film, especially so in animated media — where bright colors and voices divert attention away from the underlying parallels between the values of the movie and of actual society. This is where Disney’s Beauty and the Beast is unique. The movie is their first real instance where the role of the male “hero” is called into question, and where Disney provides us with not just two views of what it means to be a man, but two severely different views, forcing his audience to identify the archetype and its complexities right alongside an alternative male ideal and model.

Another especially important element distinguishing Beauty and the Beast from its surrounding films is the form taken by the main male character and eventual hero: that of a Beast. When comparing this film to its sister films, it takes no expert to notice that the princes and saviors of the other stories are almost always human. Not only that, but those heros are presented as near “perfect” males, with characteristics that mirror Gaston’s — tall, handsome, and distinctly attractive to the point of standing out from the rest of the characters in the film. Disney, however, introduces us to a new type of hero in this film, a Beast — a former human who is unable to love. A hero with a flaw so grave, it masks his role as hero. Beast’s animalistic transformation, stripping him of his human form, was the result of a witch’s curse who deemed the former prince incapable of expressing and feeling compassion, thus unworthy of being human. Disney artists made sure to strip him of human-like characteristics, and estrange the Beast with a massive stature, making him the biggest character in the movie, not to mention the scariest. Disney didn’t even make Beast into a specific animal, but a conglomerate of creatures, commonly known as a chimera — a Greek mythological being with the head of a buffalo, the body of a bear, the jaws and mane of a lion, and the legs and tail of a wolf. Consequently, Beast’s form makes his former self-unrecognizable, and makes anyone who sees him too afraid to try and comprehend his situation or person. This resulting alienation and loss of former status as a prince ultimately leave Beast alone to develop great insecurities in his ability to be humane and empathetic. 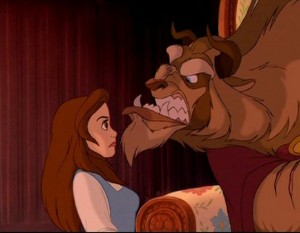 Furious encounter between Beast and Belle. 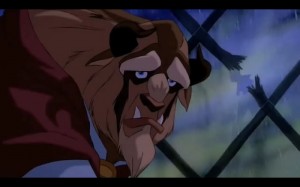 Beast lamenting about the curse placed upon him

Beast, however, eventually has to face and conquer his inner conflict : to overcome his shame over his monstrosity and show empathy towards others despite the risk of being misunderstood, feared, and rejected; After all, part of the curse is that Beast becomes the object of the very attitudes that once spurred him to act cruelly towards others when he was human. In order to reclaim his humanity, Beast must learn compassion, and leave behind his learned indifference to human emotion  from his days  as a prince. Because of his upbringing,  Beast’s  cold and inconsiderate personality keeps him from  understanding his own capability to express love and hospitality. These new and deeply-rooted sources of shame for Beast, though, are the very elements that make his transformation into a better man all the more admirable and meaningful. Through observing and adopting Belle’s compassion and accepting his own emotional vulnerability, Beast eventually discovers his capability to feel empathy and in effect reclaims his humanity. Disney’s rewarding of this new and improved image of Beast with his former human form suggest a better and improved image of man.

In danger, Belle is saved by Beast. 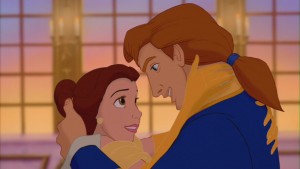 After finally learning to emphasize and love, Beast returns back to his former, human self.

So what does Beauty and the Beast have to do with anything? If you think about all the sexism and the poor portrayal of female characters and the exaggerated portrayal of men in the movie, it seems odd Disney would want kids to be entertained by it. In other words, to restate the question presented in the beginning of this essay: why keep watching? It’s blatantly obvious that Disney has done a lot over the years to continually emphasize the dominance men have over women, and we have seen this since 1931. They, however, have only mirrored the social values of each era. Aside from being blinded by the slight variations in character and plot of each movie, we are pre-exposed to a society that continues to uphold values of sexism and masculinity. So it’s no surprise that we are so used to seeing skewed portrayals and assignment of labels based on social expectations and norms, especially in the Disney animated films of today.

Not only the adults, but the children who continue watching these movies know about the ongoing sexism that’s omnipresent in the world we live in. Though they don’t go around talking about it or fully understanding it, they do comprehend that they have to act and live a certain way depending on their gender. Even before birth, children are expected to accept predetermined identities that follow them throughout their lives and shape their daily interactions and behaviors. Boys specifically are expected to be strong and self-reliant, as communicated by “tough” characters in film and other media. They do not question where this stereotype originated nor do they question if it’s right. After all, children  look up to their elders and imitate their exact moves in order to feel a sense of belonging, and eventually a sense of “maturity.” For girls, these Disney films reinforce to their audiences the importance of physical appearance and the belief that a girl’s worth is determined by the degree to which she is thin, gentle, and beautiful. And the female characters in these movies hardly get active roles, as the films enforce traditional and sexist images of women limited to skills of housekeeping and subsequently having no business in performing any strenuous work that could ruin their appearance.

These beliefs on what women and men should do are extremely relevant examples of ideologies – beliefs that, although usually unquestioned, are widely accepted, spread, and viewed as legitimate. They are illusions created by social structures to define certain roles in society. These ideologies unite people through their misinterpretation of the real world, giving them a false sense of security and enabling them to develop a “relationship” with the real world. The real problem though is not the illusion, but its omnipresence and enslavement of those in its grasp; there’s no escaping the influence of ideology, especially when supported and hyped by media we are exposed to on the daily. Our dependence on communication with one another traps us all in a bubble that repeatedly and constantly reinforces the implementation of ideologies, and as these beliefs change and evolve, so do our perceptions of “reality.”

When looking at the movie through a critical standpoint, Beauty and the Beast demonstrates how society has become desensitized to gender-related stereotypes. Thus, the films’ audiences are inherently influenced by these messages and consequently spurred to act the way their gender is presented on screen. Because children tend to naively imitate what they see without question, their social lives are forever governed by these ideologies enforced upon them in media. With no history to back the ideals and without having a creator, audiences -composed of both children and adults- mindlessly follow these beliefs, allowing media to govern their lives by  ideologies, simple claims and beliefs unsupported by history and unquestioned with respect to their creators.