The sun, the snow, and a simple cup of tea

The multifaceted experiential element of tea is something that I hadn’t understood until today. I drink a lot of tea, and I love green tea, but I’ve always thought about I’d always thought of tea as something to be consumed. Moreover, as our morning visit to the famous Ippodo tea shop taught me, even my appreciation of tea as a beverage is quite limited. I got to smell all of Ippodo’s green teas and to sample one called Gyokuro, which is a very fancy, thick, and savory green tea. The Gyokuro tea was unlike anything I’ve ever had. I was sold by the description of its scent being like “forest mist,” but when the man at the shop described it as a “luxurious” tea to be “savored slowly,” I was skeptical that it would actually taste any different than your average green tea. I’d always thought that a type of tea could be flavored in different ways with different fruits, spices, flowers, etc, but that teas of one type all tasted the same. When I tried this green tea though, I was astounded at how thick the tea was and how deep the flavor was. I could feel the flavors developing on my tongue minutes after I’d swallowed a tiny sip! Seeing the care with which the man in the shop prepared the tea (using water at a certain temperature, brewing it for only 30 seconds, getting out every drop of water from the tea leaves, re-brewing it, etc), I began to rethink the way I drink tea by haphazardly tossing a tea bag into a huge mug of boiling water. I’d now like to be more intentional about my tea drinking.

Moreover, as the day went on, I was to discover that tea can offer not only a sensory experience, but also a subtly powerful and rewarding emotional and mental experience. It has the potential to be much more than simply a satisfying beverage.

My expanding awareness of tea continued at Shimo-Goryo shrine, where we met up with tea master Dairik (Derek) Amae to collect natural spring water from a pump. Amae-san likes to collect 20 L of water from this pump every week not only because the water is so sweet and pure but also because the process of collecting his own water makes him more appreciative of water and what a scarce and precious resource it is. Since getting water is often as easy as turning a faucet, collecting it prompts you to think about the often hidden processes that enable our lives. Another reason that Amae-san collects his own water, which I discovered for myself when I took a turn pulling a 20 L jug of water in a handcart, is that feeling the weight of the water allows you to connect to it physically in a way that makes using it all the more meaningful. I found myself thinking about how Amae-san would be using that water to make the tea that I would be soon be drinking. 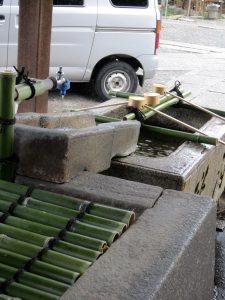 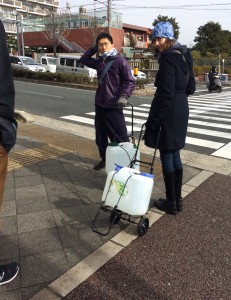 Finally, taking the time to collect water and carry water slows you down in such a way that you become more aware of your surroundings. Snow was beginning to fall lightly, and after we wound our way through the city and stopped at a sweet shop, we moved onto more narrow, quiet side streets, where the road was cobbled in stones, moss filled in the cracks of stone walls, and trees seemed to bend down slightly to greet you as you passed under them. 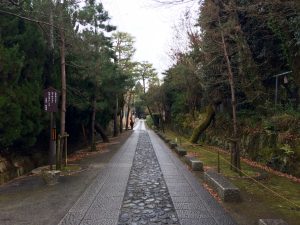 It was on one such street that we arrived at Amae-san’s beautiful house. After a group of us (Taylor, Ayami, Carl, and myself) entered into his traditional-style tearoom, he began to tell us about the importance of cleanliness and of space. He opened up the doors to his tearoom and to his garden and handed me a broom while he and the others went to the kitchen to prepare rags for wiping the tatami mats. I don’t think I’ve ever felt so excited to sweep or so honored to be given the chore of sweeping! Alone in the tearoom with the sun shining in, the window panes casting geometric shadows, and the snow falling down outside, I was able to fall into a peaceful rhythm of sweeping, soothed by the gentle swishing of the broom against the tatami. After I’d finished that, Amae-san gave us all rags, and we got down on our hands and knees to systematically wipe down the mats, scooting backwards as we did so. I loved the feeling of the ridges of the tatami under my hand, and by the end of this whole process, I felt intimately connected with the room, moved by its beautiful and tasteful simplicity. 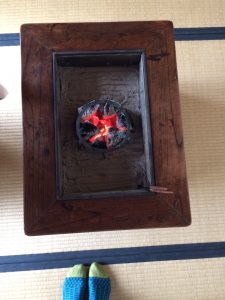 Warming up my toes

Next, Amae-san served us a simple cup of tea and then taught us some basics of meditation. We sat and meditated for a while. Even though I was a bit uncomfortable sitting cross-legged on the floor (I seem to be the only person who thinks seiza is more comfortable than criss-cross applesauce) and a little nervous about our upcoming interview of Amae-san, after Amae-san struck a gong and I began to breathe deeply, I felt myself slipping into a state of calm. The sun was warming my back, and the wind rattling the thin wooden doors leading out of the tea room and into the garden made me all the more aware of the cozy, sheltered space we were in and its and our own ultimate fragility in the face of the strength of nature and time. 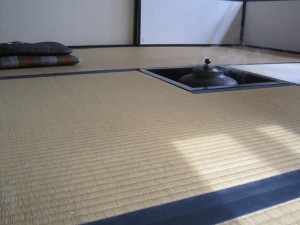 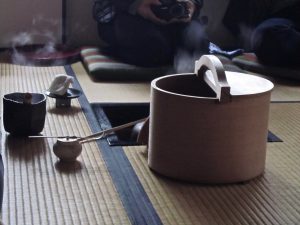 After we’d finished meditating, we didn’t have enough time to go through a tea ceremony before the next group came, so Amae-san ended up just talking with us about some of his perspectives on tea ceremony. I was particularly interested in what he said about the power of sound and the importance of natural, harmonious sound. Since our bodies are made of a lot of water, and water is affected by sound waves, Amae-san told us that our bodies actually react to sound on a molecular level. He also said something really interesting about the fact that tea ceremony emerged in Japan in the midst of of a civil war, like a lotus emerging from the mud. It is a powerful example of art providing sanctuary during times of strife and trouble.

We switched off with the other group and went to lunch, and when I walked outside, with my mind still clear and open after meditation, I was suddenly overwhelmed by the beauty of the street. Amae-san had told us that when you meditate, you empty your mind and then your senses can be flooded in a way that makes you able to appreciate everything more, and that’s the sort of experience I had. As I walked down the street, I reveled in the way the big snowflakes caught in my hair and eyelashes and stuck to my coat, providing a striking contrasted with the black wool. A dusting of snow was beginning to cover the leaves and flowers of plants, and I skipped a few steps and caught snowflakes on my tongue and admired moss and gazed at the beautiful old buildings. 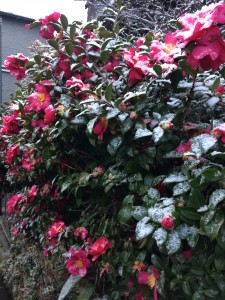 Seeing flowers dusted in snow was so special

I returned from lunch still in this joyful state of mind, and Amae-san served us tea and answered some of our questions. I’d been expecting a more formal tea ceremony, and I was a little disappointed that we didn’t get to experience that, but Amae-san is clearly someone who falls more on the modern, innovative end of the spectrum in dealing with the tension between tradition and modernity. Since Ayami and I will be sharing more reflections specifically on what he said about tradition/modernity and how he thinks about tea ceremony, I won’t focus too much on this now, but it definitely gave me a lot to think about. 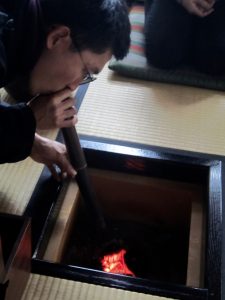 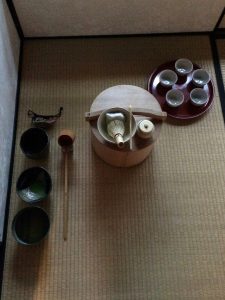 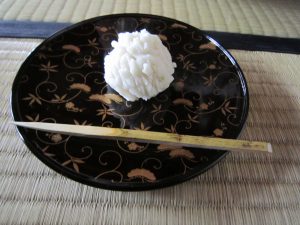 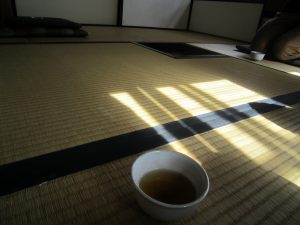 Ultimately, however, I’d expected to hear interesting perspectives on tea ceremony, but I hadn’t expected to have the powerful emotional reaction that I did. Even just drinking a bowl of matcha as Amae-san was casually talking, I felt transported somehow. By that time, it was growing dark, and as the room darkened and the last rays of light reflected off the bright snow accumulating outside, I held the warm ceramic bowl with both hands and let out a deep breath. I felt at peace, in the moment, and truly grateful to be sharing the the tea, the warmth of the room, and the experience with all of the kind, thoughtful people on this trip. Something Amae-san had said earlier suddenly made more sense: “Tea is serving to the spirit of individuals, to the higher being in us.” 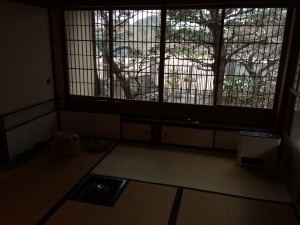 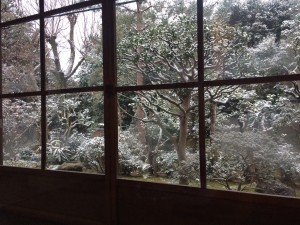 As the day progressed, we could see the snow accumulating through the windows of the tea room

This entry was posted in kyoto and tagged tea, tea ceremony. Bookmark the permalink.