Meanings and Metaphors in Art

Today was a very busy day that consisted of three distinct and, on the surface, fairly disconnected experiences: a lecture on Noh by Diego Pellecchia, a lecture on Japanese Nehan paintings by Professor Ludvik, and then a visit to the mirror maker Yamamoto-san.

Diego’s lecture on Noh was helped me understand and relate to what can initially seem like a highly stylized, inaccessible art form. Noh is very much an art of allusion, and Diego’s presentation helped me understand how this subtlety might make Noh inaccessible in some ways, but it could also be seen as a way of engaging the audience, calling upon them to engage with the performance and to use their imagination to complete the show. Overall, I feel a lot more prepared for the Noh performance that we’ll be seeing on Sunday. Not only do I have a better sense of what to expect from the specific performance that we’re attending (Hakurakuten), but I’m also armed with some specific strategies on how to avoid becoming bored during the show. (Staying interested during Noh performances, it would seem, is an art in and of itself.)

Diego, who has experience as a Noh performer himself, explained the roles of the actors and people on stage and taught us the basics of how to identify characters and the types of Noh plays based on costumes, fans, masks, and style of dancing. He also tried to teach us how to make the calls that the musicians use to keep rhythm, and that was a lot more challenging than it seemed. By the end of his lecture, I was really able to appreciate and understand the extent to which Noh truly is a collaborative art form. It involves mask design, costume design, music, dance, stage set-up, and narrative elements. (Also, a random tidbit that I enjoyed learning was that plants can be characters in Noh performances. I wonder if moss can be a character. If it isn’t, it should be.)

I was amazed by the fact that Noh is performed without any repetition or rehearsals; each performance truly is “ichigo ichie” or a ‘once in a lifetime experience.’ This idea also related to a very compelling argument that Diego made about Noh being more like real life’ than other theatrical performances. Since there are no rehearsals, it is performed in an organic way. In addition, the stage has no curtains, so the actors are always in plain sight and, as in life, can’t take breaks or disappear in case of mishaps but, instead, have to work it out as people are watching. Given that Noh is so highly stylized and encoded, I found it really interesting to consider this argument and the ways in which it supports the old saying, “You can’t judge a book by its cover.” You might be able to judge the characters in Noh by their masks and costumes, but drawing conclusions about the meaning and nature of Noh might not be that straightforward.

Professor Ludvik presented on ways of commemorating the Buddha’s life and death in Japan. In particular, she focused on nehan paintings, which are paintings of the Buddha lying down surrounded by his disciples just after he’s passed away. After showing us the traditional nehan paintings, she introduced us Ito Jakuchu’s famous Vegetable Nirvana, which is a very personalized version of a nehan painting that substitutes in vegetables for the Buddha and his disciples. Vegetable Nirvana, in turn, has become famous and influenced other art forms. After thinking about the collaboration involved in making Noh and then seeing the various developments and variations of nehan painting, I started to think about how all art is a collaboration on some level, whether directly or indirectly through influence and inspiration.

Our last portion of the day, our visit to mirror maker Yamamoto-san, also made me think philosophically and metaphorically about art and its meanings. Yamamoto-san’s process of making a bronze mirror involves creating a mold, casting it, and then filing, sanding, and smoothing one side until it gleams like a glass mirror. Looking at it, I couldn’t believe that it was just polished bronze. After Yamamoto-san told us about the history of the mirrors and his process of making them, he demonstrated and let us try out the steps, so I had a chance to try polishing bronze to make it shiny. It takes a lot of patience and hard work, but it really does become beautifully shiny. It seems to me that there’s an analogy to be made about life… 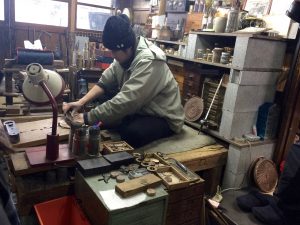 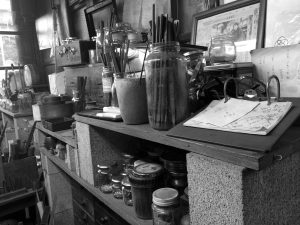 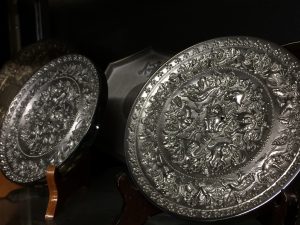 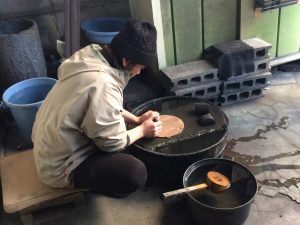 I was also fascinated to learn about Yamamoto-san’s special makkyo mirrors, which reflect/project a hauntingly beautiful, translucent design when you shine light onto them. They’re able to do this because he sands them down to less than 1 mm thick, at which point the metal goes from being flat to being convex, allowing it to reflect light. I really liked the idea that the more pressure the metal is subjected to, the less perfect it becomes, but those ‘imperfections’ are what give it its beauty and strength. 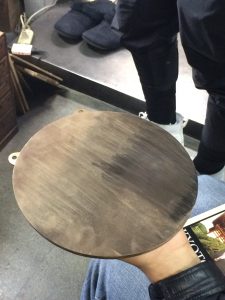 After it’s filed, the bronze surface starts to get more shiny, as you can see here 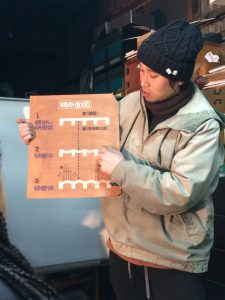 I ended the day with a lovely dinner with Ayami, followed by some good conversations while hanging out in the hostel lounge. Also, I owe a huge thank you to Ayami for her incredible work translating during our visit to Yamamoto-san! 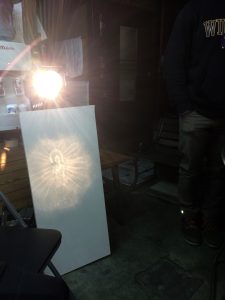 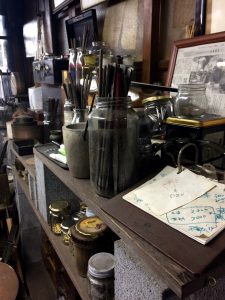