Miyamoto-san gave us quite a view into his life and work today, for which I’m really appreciative. The refinement, skill, dedication and creativity with which he designs builds and reconstructs works is impressive–and results in quite a sight to behold.

Sketch in Miyamoto-san’s main work area. Part of his work which caters more to the child’s tastes.

I think I was most impressed by the philosophy Miyamoto-san lived and worked by in order to make his craft as much of a success as it currently is. He goes into each work with the mindset (respect, spiritual awareness and reverence) expected of an avid believer and practitioner of Buddhism (gen.) but with the creativity and innovation fitting for someone who once pursued fashion design in school. This duality in his work ethic and motivations, I’m sure, accounts for the unique “色”–“color”/style–that results in his work.

Miyamoto-san explains the process of sculpting intricate details on a wooden statue, using hundreds of different tools to make the biggest to smallest details.

In the hopes of furthering Buddhism’s popularity (especially within the younger generations), he’s innovated commonly seen Buddhist figures (such as the Daruma figures) and turned them into something that would not surprise me if it showed up in a Miyazaki film. Here especially I got the sense that there was more to being an artisan (especially for a tradition and belief system that may not enjoy as much avid participation and belief from people as it used to) than simply “making” things and continuing the tradition–it involves changing along with the people; it involves innovation which accounts for the change in people’s way of thinking and living. Miyamoto-san’s work is a prime example of this. 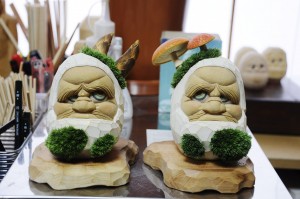 The two Daruma dolls which play on the traditional appearance (much more grim in nature) of Daruma, making them more enticing to children.

His specific craft is also an interesting example/continuation of a thought I expressed in my last entry about the fact that in modern Buddhism there seems to be a much more apparent cross between spirituality and commerce–but hearing Miyamoto-san explain the lineage of his craft and the general need for his specific skill for the past several centuries I think it may have always been the case that commerce and spirituality are tied.

This kind of echoes one of Miyamoto-san’s parting messages to us about his belief that Buddhism is more a way of life than a religious tradition separated from one’s secular world–it weaves itself through every aspect of one’s existence and creates a beautiful experience and awareness of things. Miyamoto-san showed us just how much of an example his own life is of this with the very personal statue of the “Kannon” version of the Virgin Mary, which he actually used to propose to his wife with. In this alone, we see pretty much every aspect of Miyamoto-san’s life brought together in one beautiful piece–his work, his beliefs, inspiration, and his love. It was a window into the life of someone who’s “work style” truly is his “lifestyle.”

The konnon-virgin Mary Miyamoto-san proposed with.

This was not only informative but eye opening in many ways.