This morning when I woke up and looked outside, I was thrilled to see that yesterday’s snow had stuck to the ground and, what’s more, it was still snowing really hard.

We didn’t have anything on our group itinerary until early afternoon, so Ayami, Carl, and I went to Kitano Tenmangu with the intention of getting some of their famous amulets. Because I didn’t know anything about Kitano Tenmangu other than the fact that it sells amulets, I wasn’t expecting it to be such a large and beautiful shrine. When we arrived and I saw the torii’s red flags against the swirling snow, I exclaimed aloud. 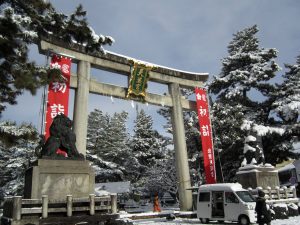 The torii to Kitano Tenmangu 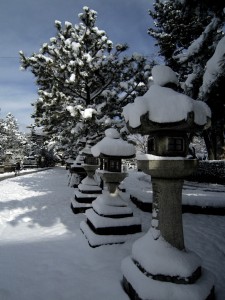 Stone lanterns lining the path as you approach the main shrine

As we explored the shine, my wonder and delight only grew. In particular, I marveled at trees that were covered in snow but also displaying delicate buds and blooms. 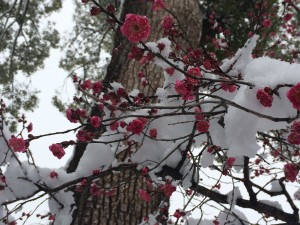 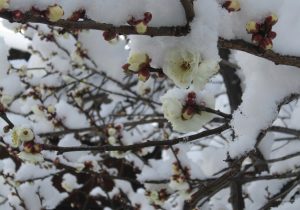 More flowers in the snow! 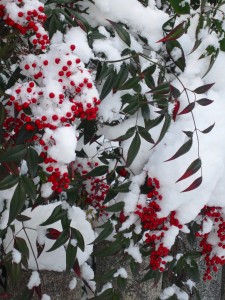 I loved the red color against the snow

The magical quality of freshly fallen snow, combined with the spiritual atmosphere of the shrine and the natural beauty of its gardens made the visit especially special and gave the whole experience a sort of otherworldly quality.

This guy looked a little cold with just his red bib 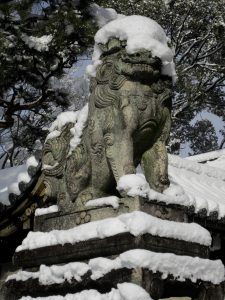 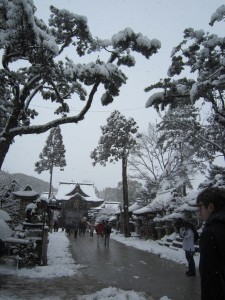 Kitano Tenmangu in the snow

After purchasing our amulets, we had about an hour and a half before we had to meet the group, and we decided to go to Kinkakuji (the Golden Pavilion), which was only 3 bus stops away. It’s a very a World Heritage site and popular tourist destination, and we were eager to see it, especially in the snow, which we thought would make it especially beautiful and perhaps even less crowded. Unfortunately, however, it seems like half of Kyoto had the exact same idea because we arrived to discover a huge crowd of umbrella-carrying visitors. (Umbrellas seem to be a standard snow accessory here in Japan). 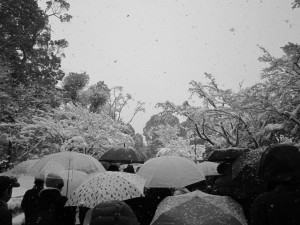 We got into the line, which was really more like a throng of people filling up the entire path leading to the temple gate. It was about 15 people wide, and we couldn’t see how far it stretched, but we figured that it wouldn’t take too long. We were very wrong… About an hour later, we still hadn’t entered Kinkakuji, and the line was still moving at an impossibly slow crawl. We  began to worry that we were going to be late for the Noh performance we were attending, but weren’t sure what we could or should do. With all of the umbrellas blocking our vision, we couldn’t tell how close we were to Kinkakuji, and we really wanted to see it after waiting so long, but we were afraid that we were still really far away from it and that we’d miss the show. We ended up making it through the gates and, when the crowd was still just as packed, we decided we had to leave. We then proceeded to push our way against the crowd, back all the way through the line we’d worked so hard to progress through! 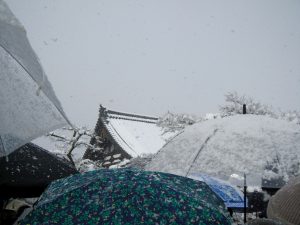 It’s unclear whether this was actually Kikakuji or not, but this is the closest we came to seeing it!

We made it to the Noh theater in time, and as I sat down, I ran through a mental list of strategies for not getting bored or falling asleep during the performance. The strategies must have been pretty effective and the plays quite well-done because I actually didn’t fall asleep at all. Despite Noh’s slow pace, I actually found a lot to think about and respond to in the performance as I let my attention drift from the instruments to the costumes to the mask to the songs to the dance and movements and back again. I also think the fact that the lights stay on in the theater during the performance helped a lot. 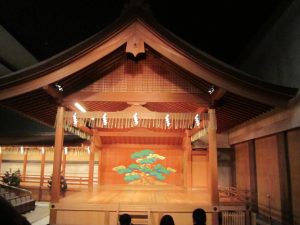 The Noh stage is like its own building within the theater, a vestige of when the stage used to be outside

The first play we saw was Haku Rakuten, a ‘deity play’ is about the Japanese god of poetry disguising himself as an old fisherman and impressing a visiting Chinese poet with the superiority of Japanese poetry over Chinese poetry. We took a break to get lunch after this show, and then we went back to see the Ikkaku Sennin, a ‘demon play’ about a prince seeking to end a drought by sending a woman to seduce the wizard hermit who has captured the dragon gods (who control the water). Haku Rakuten was much slower, longer, and more dignified, whereas Ikkaku Sennin was much more dramatic and exoticized, with faster dances, louder music, large props, and flashier costumes.

In both plays, I was struck by how powerful and almost otherworldly the sounds were. The actors had strong, vibrating voices that rose and fell with every phrase, and because some of them wore masks, you couldn’t always tell where the sound was coming from, causing the already surreal sounds to become even more powerfully disconnected from reality. The flute made a piercing howl that combined with the calls of the musicians keeping time and created a haunting sound that reminded me simultaneously of wolves or coyotes howling, wind screeching, whales calling, and grieving people wailing.

I also was amazed by the discipline, patience, and amazing feats of endurance performed on stage, whether by the actors in the chorus, who sat for hours in seiza, straight-backed, eyes ahead, without moving a muscle (including their eyes), or by the people who had to hold uncomfortable, stiff poses for extended periods of time. I could actually see one actor’s muscles visibly shaking from the strain, and I felt bad that they were subjecting themselves to this when surely there were easier ways of doing similar things. According to Diego, however, enduring such strenuous positions and tasks is part of what makes Noh so remarkable and meaningful. Thus, even as I was cringing at the shrill screech of the flute from my seat in the audience, an actor was sitting directly next to the flute player without any ear plugs.

Ayami and I ended the day by strolling along Teramachi street. Under the brightly lit, covered arcade lined with stores selling everything you could imagine and more, it was easy to lose track of time, and I felt like I’d been transported to yet another world. Ayami took me to Lupicia, which is an amazing tea store, and we had a lot of fun smelling all of the teas and choosing our favorites. There are also just so many tastefully designed Japanese shops with beautiful, handmade items, and everyone working in stores is so kind and thoughtful. One woman insisted on carrying our bags to the door for us and then went out onto the street to wave goodbye to us. 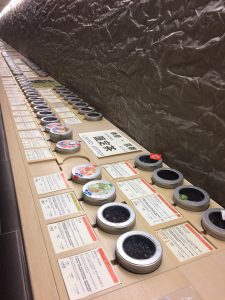 So many teas to smell!

When we walked back, it was still snowing, and I looked at the clumps of snowflakes on my coat, I was thought back to the beginning of the day, when I first stepped out into that snow. From the Narnia-like world of snow-covered Kitano Tenmangu, to the crowded space of the Kinkakuji line, to the Noh theater, to the shopping arcade, I feel like I travelled through several different worlds today.

This entry was posted in kyoto and tagged noh. Bookmark the permalink.