Each day is filled with such wonderful experiences, places, and people that writing this journal at the end of the day is nice as I’m able to think back and remember what happened throughout the day. Today, there seemed to be endless surprises, and it was an adventurous day!

I started out today by fulfilling one of the main things I had wanted to do during spare time on this trip, which was to make my way to Kitano Tenmangu shrine! I wanted to pray and purchase omamori (amulets) for studying and good health. Louisa and Carl came along, and when we stepped outside, we were surprised by how much snow was on the ground and by the large size of the snowflakes. Almost as if in a dream, we boarded the bus.

The most pleasant and beautiful surprise of the day was the beautiful nature at Kitano Tenmangu. The ume (plum) flowers had begun to bloom, and the coating of snow over all the branches and leaves were breathtaking. We slowly strolled toward the main shrine area, prayed, purchased our amulets, and then took a nice long stroll back to the entrance. 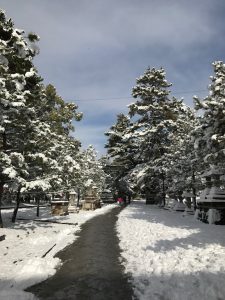 Path to the main shrine at Kitano Tenmangu. 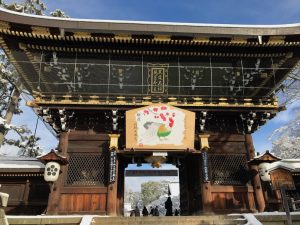 Since it is now the year of the rooster, the rooster was heavily featured! 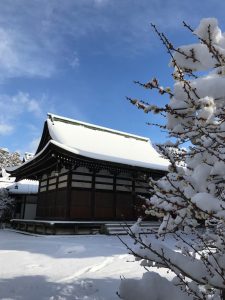 We also took a short break to get some tea. Here was the third surprise of the day! There is this very delicious tea I got on the second full day here — a yuzu, lemon, and honey tea that comes out warm and really heats the body — but we could not find it again ever since. When we looked for a tea to warm us up in the cold snow, lo and behold there was the yuzu tea! Louisa and I have been checking every vending machine we pass in the streets and convenience store we enter, but so far we have not found it again, so we believe this to be a rare tea — a most auspicious sighting and taste! We were so happy we took a picture in front of Kitano Tenmangu with our tea bottles! (>.<) 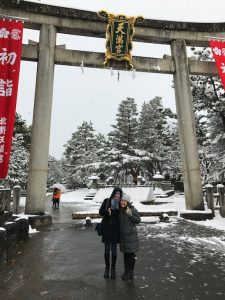 With our bottles of yuzu tea! Yes, we have a nice , non-bottle photo saved as well.

Updated Note: we never did find the yuzu tea in a vending machine again 🙁 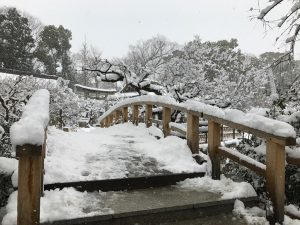 A really beautiful stone bridge at the shrine. 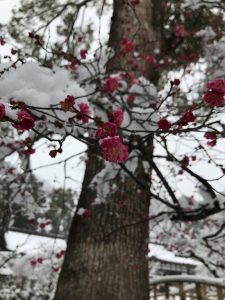 I was surprised to see some flowers blooming! 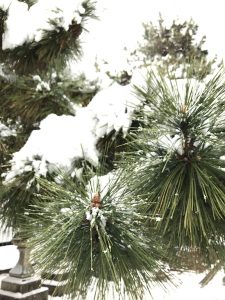 The snow on this pine just looked so regal and beautiful!

We then decided that since Kinkakuji (The Golden Pavilion) was only three bus stops away, we could manage to quickly see it before heading to the Noh Theater. Unfortunately, this was the next surprise of our day. We had thought that Kinkakuji would be easy to access and relatively uncrowded like Ginkakuji, at which we had a great experience. However, the bus to Kinkakuji was crowded, and then there was an ENORMOUS line to get into the area. In fact, the three of us were caught within this large line that was extremely long and perhaps about 10 – 15 people wide! People were crowding in, and we must have waited thirty to forty-five minutes just to get inside the first gate. Since everyone had umbrellas, we could not see over them to get a sense for how long the wait would be. Before we even got any further than the first gate, we debated whether we could actually see Kinkakuji or would have to leave to make it to the Noh theater on time. We ended up leaving before glimpsing anything.

Feeling defeated and hungry, we decided the take a taxi to the theater to save time and any confusion. Here was another surprise of the day! Our taxi driver, after hearing our sad story of attempting to get into Kinkakuji, gave us a mini history lesson about the relationship between Kinkakuji and Ginkakuji, including a mentioned of Genghis Kahn and how the word kamikaze came to being, and some insight into why the area was so crowded today, Apparently there was going to be a relay race of women in teams from each prefecture in traditional clothing — a race that has been happening for many years. The men’s race happens on the 20th in Hiroshima, according to our driver. Although we did not see Kinkakuji, we had a nice ride to the theater that was packed with educational information, and it almost felt like we were getting a little personal tour!

The next surprise for me was the Noh performance. Since I love Japanese tea ceremony and the tradition that accompanies it, I thought I would love Noh as well. Unfortunately, Noh is not my cup of tea (pun intended!). However, I found the performance to be interesting with many little quirks and differences, which I was able to discuss with and ask questions about to Professor Pacchellia.

First, we saw Hakurakuten, a play about a god who disguises himself as a fisherman to impress a famous Chinese poet and make Japanese people seem very refined and capable. The political nature of the point is absolutely relevant and tangible to me, a viewer in the audience. The second play we saw was Ikkaku Sennin, a play in which a wizard is tricked into losing his magic (by a prince and a beautiful woman) and thus losing to the gods and having to release the dragons he had trapped. I am interested in hearing more about what will happen to the two young girls who played the role of the dragons in Ikkaku Sennin, the second play we saw today. Noh, as an traditional, sort of ancient art is both beautiful and masterful. I can see why it is so beloved and cherished. While I appreciate the beauty and simplicity of the plays, I do not particularly care for it or would not choose it our of an option. I am very much looking forward to hearing from the Noh master on Tuesday to hear his thoughts on the tension between modernization and maintaining tradition. I am also looking forward to just hearing him discuss the art for more, through which perhaps I will enjoy the art form beyond appreciation! I wish I had more photos of the theater, but we were not allowed to take photos beyond this one below. 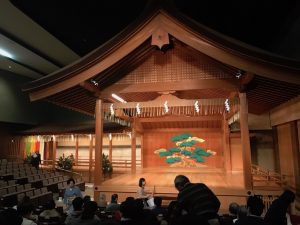 The “building inside a building” stage set up of Noh. For some reason, this does not strike me as particularly peculiar.

I ended my day with some shopping and dinner in Teramachi with Louisa — another little date, if you will. The last surprise of the day was how much can be found in this little area, especially inside the different little shops. I also really loved how varied the shops were! I found many things I liked, some of which I took home with me, most of which I could not. The noodle shop at which we had dinner has been there since 1929, which is relatively on the younger side of old shops in Kyoto, some of which have existed for 300, 400 years! I especially love the way older, more traditional Japanese arts and products meld together with modern, more youthful parts of Japan to create such a dynamic area! I am quickly falling in love with Kyoto and will be deeply saddened to leave it. However, I cannot wait to make my way back here again!