Although I have worn kimono before, I did not know much about the weaving process until today. I am so thankful to have had the opportunity to visit the Nishiki Koho Tatsumura Company, as well as other artisans he works with to put grand works of art together. It had not struck me how much the process is a collaborative one. In fact, the word they used was bungyo to describe and emphasize just how much of a team effort making these beautiful pieces truly are.

We began the day making our way to the textile center. Walking under the snow was a lovely surprise since I had expected it to rain all day. As we made our way to a more elevated area via bus, we all gasped at the sigh of the beautiful mountain covered in snow. I realized just how much nature truly does inspire some of the artisans we have been visiting.

The camera on my phone simply does not do the snow on the mountain any justice.

Koho Tatsumura Company had a very lovely and beautiful entrance way in which Koho’s successor, Amane Tatsumura, gave us an introduction. He explained some of the basic techniques that are used, stressed how much of the Nishijin area artisans team up to create pieces, and showed us how the woven pieces change depending on how the light hits the piece. I found that to be one of the most amazing things about Nishiki textiles. 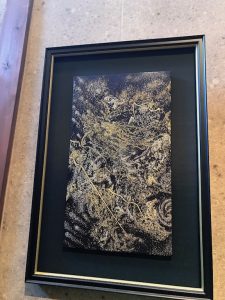 No light on this one 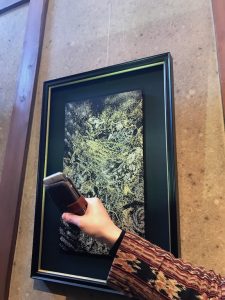 Do you see the dragon towards the middle now that it has light?

I absolutely loved being at the Koho Tatsumura company — and not just because they let us try our own hand at weaving with a loom (a video of my trying it out is below!) but because they have such a detailed history and purpose. One of the company’s focus is on research and development to discover some of the older techniques that have been lost over time. Mr. Amae’s great grandfather did not even have the loom to recreate pieces, so he built the loom as well! 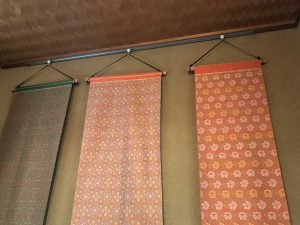 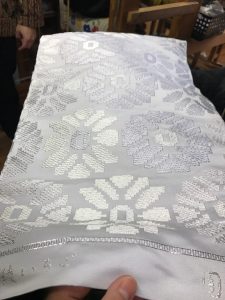 Watching the video about how much effort goes into making one piece absolutely blew my mind away. I was struck at how much these projects are labors of love that people will eventually wear or hold, and that to me, is the true spirit of Japan we begun to find.

Meanwhile, we had a translator named Steve, and since I had the day off from translating, I just watched him do it instead. See someone else translate two languages you know and has helped me keep in mind the importance of my abilities as well.

We all also were able to experience weaving!

Mr. Tatsumura himself helped us complete our pieces!

We then headed to the place where the plans for the weaving are created. Essentially, this company is the architect — people bring in their designs, the weavers consult with the planner — that puts the pieces in order to build a beautiful obi.  These people decide how each piece will be carried out, putting the design on graph paper.The planners then create cards that will be used by the jaqcuard looms. I did not realize that each row of card was for one thread for one row within a row of thousands of other ropes. Each piece may take, on the low end, 40,000 cards!

Here, we see some pieces that were made through this planner or “architect.” 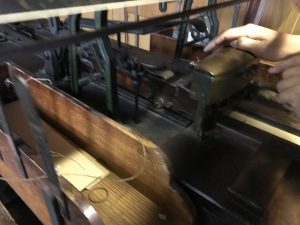 This is originally how the punch cards were created. They are no longer created this way.

Lastly, we visited the people who dye the thread being used. The Koho Tatsumura Company has their thread dyed by the Okamoto Brothers. Their family has been in business for five generations, and they unfortunately have no successor. Over 200 thread dye shops existed in the area thirty years ago, and now less than 60 remain. The first generation of their family used natural dyes, but since the chemical dyes have become popular for lasting power and bright colors, they use chemical dyes.

When we first entered the shop, we were told, by the younger Mr. Okamoto, that most silk now comes from either Brazil or China and were shown the difference between silk that has been prepared to be dyed, versus the silk that has not been. The unprepared silk looks smoother but still has the sticky substance remaining from the silkworm’s cocoon, making the silk hard to absorb dye. 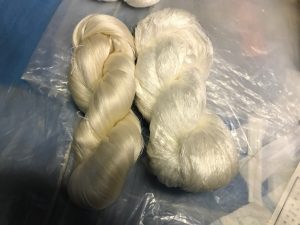 We then got to watch the rare dying process. This process is hard to be able to see and was only an experience available to our class through the invitation of Mr. Amae Tatsumura. The maker dyes the silk thread to match the color of a sample brought in by a client. There is no recipe, but rather the Okamoto brothers rely on their eyes to check the color and make up a recipe on the fly. They then squeeze the extra fluid out, check the color, and if the thread is ready, put it in a fixer to hold the color better, and then dry the silk out. The older Mr. Okamoto said the process takes about three days — then the product is ready to be picked up! There is no official training for this type of work, rather the brothers have trained themselves through experience and watching others’ work. 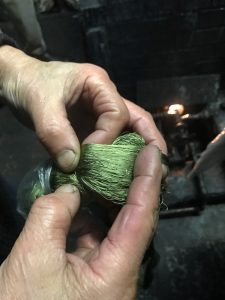 On Mr. Okamoto’s left is the thread he has dyed, while the color he is aiming for is on the right. He could tell there was a slight difference, which I could not!

I wish we could have heard Mr. Amae Tatsumura talk more about his work, since he was such a modest man but his works so beautiful. After visiting and talking with just three of the up to seventy people who might be involved in the process of creating a Nishiki orimono piece, I am much more appreciative of the weaving work done to create beautiful kimono and obi! I am reminded of how much this is a labor of passion and artistry as well as a labor of teamwork and an entire neighborhood coming together.

I ended the day by going to dinner with Yamamoto-sensei, Carl, and Louisa. Eating traditional Japanese food always makes my heart sing! I also am looking forward to tasting the traditional wagashi — Japanese confection — later tonight. I end this post with a photo of my favorite piece we saw in the entrance hallway at the Tatsumura factory. Mr. Amae was inspired by the salt caves in Poland during some of his travels to create the piece. I am imagining his trying to convey his experience there to the many people involved in creating this piece, and it is a testament to the brilliance of these artisans that the piece is truly beautiful! 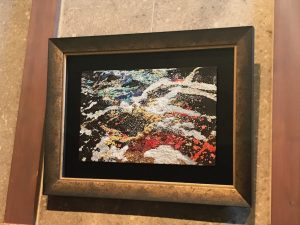 My favorite piece we saw today.