I was more than excited for the first full day to explore what this historic and deeply cultural city had to offer, and of course the beautiful Kyoto did not disappoint. We began the day with a fascinating and detailed lecture by Professor Catherine Ludvik. During the preparation lecture for our visit to Daitokuji, the famous Buddhist temple, I learned so much information, including the three different sects of Zen Buddhism in Japan (Rinsai, Soto, and Obaku), the architectural and physical layout of Zen Buddhist temples, Sen no Rikyu’s relationship to Daitokuji, and even about the annual “airing out” of treasured artworks or mushiboshi, as it is most commonly known. 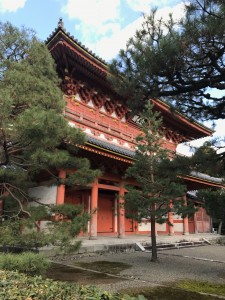 Outside of the Sannmonn, or “Mountain Gate,” the entrance to the main buildings of Daitokuji. The characters say “Golden Hair Pavillion,” which is a reference to the golden haired lion that comes up in Zen texts and represents the enlightened master.

We then made our way to Izusen, a vegetarian restaurant right by Daitokuji. Shōjin ryōri is traditional vegetarian Buddhist cuisine in which dishes are seasonal and small. On a whole, our meal was anything but small, but the influences were still quite clear – especially the series of small dishes. One of my personal moments of delight was seeing “Williams College” on the room reservation for lunch!

The reservation tag with “Williams College.”

At Daitokuji, we toured the grounds of the main buildings and several of the sub-temples, during which her initial lecture was incredibly helpful. One of the “fun facts” I learned during this time was about Ryōsen-an, at which the first foreign abbot worked and translated texts of Zen teachings. I look forward to learning more about Ruth Fuller Sasaki and her work! 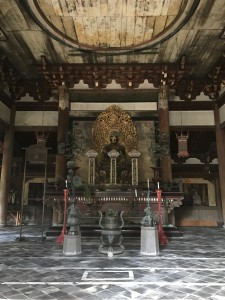 Here is the main Buddha in the Butsuden, or Buddha Hall. Note the faded dragon on the ceiling — a symbol for water in many forms to protect the building from fire.

My two favorite parts of today were Kotou-in Temple and Juko-in Temple. Kotou-in temple was established in the 17th Century by the Hosokawa Family, many members of which are still buried there today. Inside was the most beautiful gardens, and the walk among the bamboo trees, moss ground, and winter-blooming flowers was both incredibly peaceful and invigorating. The temple founder was of the warrior class, and although his wife was a Christian who was not in good favor with the then-ruler of Japan, he stayed with her and had her buried at Kotou-in with him.

One of the beautiful gardens of Kotou-in. The ground is covered in moss, which is immensely beautiful in the sunlight.

The visit to Juko-in was my absolute favorite part of the day. This tour was guided by a staff member of the temple and conducted entirely in Japanese. The tour guide was quick to point out that Juko-in is usually not open to the public, but due to this being 450 year anniversary since its founding, it has been opened with the many famous artworks – which are housed in the Kyoto National Museum – in it replacing the duplicates that are usually featured there. The artworks featured were by Kanō Eitoku and his father. Their fusunoma-e or paintings on the sliding doors of rooms, were both deeply meaningful and beautiful to behold. Seeing the pieces in the rooms they were meant to be viewed, and thus custom made for, was an incredible experience. At the national museum, they are usually placed in a horizontal line, but here the nuances of some of the pieces came out simply due to the original positioning. For example, the communicative moment between two birds is lost in the horizontal alignment but comes alive when placed as intended. My least favorite of the art pieces was the most modern piece, created by Senju Hiroshi, because it simply does not have the same history as the other pieces have.

Perhaps one of the best parts about Juko-in was my having to translate everything from Japanese to English for those who had not taken much Japanese, since this led me to aptly listening to and processing the information twice – once in Japanese and once in English. It may be due to this reason that I was better able to soak in and appreciate the information of this particular building.

Built in 1566 to honor and be the resting place of a Daimyō from Tokushima-ken, Joku-in is now most famous for being the resting place of Sen no Rikyu, the founder of the modern tea schools in Japan. Seeing the tea rooms designed by his descendants, with his philosophies in mind, was beautiful and inspiring. As a student of tea myself, this was an incredible opportunity, and I will be discussing this visit for many years to come. 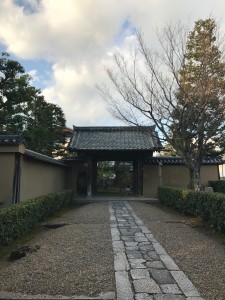 Due to restrictions, I was not able to take any photos inside of Juko-in, but I did take a photo of the entrance we took!

We ended the day with grilled mochi and tea nearby Daitokuji, which resulted in the most wonderful conversation with my classmates! I hope we can have many more moments like that where we discuss about what we learned that day and branch out into more nuanced conversations.

After the first day in Kyoto, I simultaneously feel that I’ve seen and done so much and yet have not even scraped the surface of what the city holds in its streets, buildings, and people! I cannot wait to continue exploring and learning each day and looks forward to the rest of this trip.